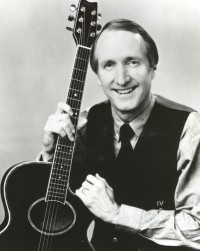 Programme director of the Billy Graham crusades, Cliff Barrows, says, "George Hamilton IV is as unique as his name". And it is his unique telling of the gospel through country music, which has taken him around the world, performing from Anchorage, Alaska to Zurich, Switzerland. He has appeared as a guest soloist at Dr Graham's crusades, including Mission England in 1984, '85 and Mission '89 and has also ministered with evangelist Leighton Ford on crusades in the US, Canada and India.

George has appeared at the Greenbelt Festival on several occasions and in Holland at the European Christian Artists Seminar. In 1986 he travelled to Amsterdam as a guest soloist for the International Conference of Itinerant Evangelists.

As a Christian communicator George is concerned about social issues. "Trends now reflect the general feeling in the world today that things are getting pretty sick," says George. "The pornography in the movies and all the other dirt and filth around us is sickening. I think we're all beginning to react to that, and kinda wishing for a return to a time when things weren't so decadent. Most of us are fed up with all the emphasis on the seamier side of life and that's probably the reason people are turning back to deeper things.

He was honest about his mistakes and the dangers as an entertainer of falling into the dangerous trap of making a "show" of religion. With encouragement from Christian feeds, his Christian commitment and desire to be of service to his Master won over his sense of unworthiness. With that commitment came a greater spiritual strength of character, which matures, with every month of his widening worldwide ministry. Acknowledged as the number one entertainer of the international country music scene, George has achieved international ambitions, such as being the first US country singer to headline his own British Television series (for the BBC in 1972, leading on to a regular series during the following years), the first US country singer to perform in Russia and Czechoslovakia and to give a "one man lecture concert" at Moscow University (March 1974), and the first US country singer to record an album in Eastern Europe (with Czech group Jiri Brabec and country beat in Prague, August 1982). George was born in Winston Salem, North Carolina, on 19 July 1937. He was just 18 years old when he had his first million seller "A Rose And A Baby Ruth" (1956) - incidentally, it was the first gold disc for ABC Records.

His love of country music was heavily influenced by the artists he heard on Nashville's "Grand Old Opry" radio show, especially Hank Williams and Ernest Tubb. Broadcasting regularly over local radio while still at school George then won a spot on the "Town And Country Time" programme in Washington and scored a string of hits with numbers like "Only One Love" and "High School Romance". These were very pop orientated and caused him to become something of a teen prodigy. Teen tours followed with the Everly Brothers, Chuck Berry, Buddy Holly, Brenda Lee and many more. But country music was always his real love and after Network TV appearances, including spots on the Arthur Godfrey Talent Scout Show, George was given his own TV show, which led to an ABC recording contract. George went on to have hits with songs written by such diverse composers as John Hartford, John D. Loundermilk and Leonard Cohen, but always his performance showed deep country roots. In 1958 he had his second gold record with "Why Don't They Understand", followed in 1963 with "Abilene".

In the late 60s he settled in Nashville, forsaking his "teeny copper" image for a more country image, with such songs as "Fort Worth", "Dallas and Houston", "Break My Mind" and Canadian Pacific" produced by the legendary Chet Atkins.

Determined not to be just another country singer" he explored fresh music areas and became heavily influenced by the American Folk Revivalists and started to record material by the likes of Bob Dylan, Peter, Paul & Mary, Leonard Cohen and Joni Mitchell. He was also the first Nashville artist to extensively record songs of Gordon Lightfoot. Finding fresh audience appreciation by seeking out different kinds of concert venues, like the Newport Folk Festival (1968), he appeared alongside high-calibre names such as Pete Seeger, Joan Baez, Arlo Guthrie and Janis Joplin.

During the '70s George criss-crossed the globe and became a solid country favourite among crowds everywhere with songs like "Canadian Pacific". Towards the mid-'80s however, he became more and more aware of his Christian commitment.

In 1987 George returned to Britain and Holland for a 6-week country gospel tour playing venues ranging from barns to large inner-city churches. In November/December 1988 he presented Britain's first "Country Christmas" concert tour, which has since become an annual event. UK Evangelist Tony Stone remarked, "We had one of the most fantastic evenings we have enjoyed in a long time...hundreds of people crowded into our church and some even spilled outside. George shared a first-class programme which really ministered to people."

George Hamilton IV is a world-renowned music maker yet he says his favourite kind of music is Christian music because it "uplifts and inspires, and is the kind of music that will outlive this generation. Quality-Christian songs span the years to bring a much-needed message of comfort, cheer and hope amid the dark, despairing seasons of life. It is the kinda music I like to hear after the evening's TV newscast has told me the worst of the daily headlines. It is the music to dispel the depression and the worry and put new tread on my tyres!"

George recalls, "It was at the European Christian Artists Seminar in Holland in 1983 that I first became aware of the power of praise and worship songs as something distinctly different and very beautiful and meaningful. Each day before lunch we all gathered in the main hall for a time of music and ministry (a little preaching, a little praying and a lot of singing His praises). The music was often led by folks like Dave Bilbrough, Graham Kendrick and Karen Lafferty, and I was so blessed by their musical ministry in song as we joined in singing praise and worship choruses together. Then during the Mission England services in 1984, '85 and in Amsterdam '86 I began to fully realize the power and beauty and worship value of this music form. "I'm grateful for the influence of gospel songs. They have made a great contribution to my emotional development since I first heard them as a young child growing up in North Carolina. I'm glad too, for the new generation of inspirational writers.

"They serve our generation by providing us with uplifting songs expressed in contemporary music styles."

As an entertainer, George's image has enabled him to be accepted by millions of people the world over. As George himself once remarked, "We are all the sum total of our experiences, that means country, pop, rock, folk and rhythm and blues have all left their mark on me and I reckon my style today evolved from these different trends and sounds that I've grown up with and been exposed to. I've been lots of things, even a 'country folk singer', and I'm not one for labels but if you must, call me a country singer...that's all I ever wanted to be! I'd just like to be as good as I can as a performer, a family man, a human being and I'd like to be known as a citizen of the world. Last but not least I want to take my stand with other Christians to be the best Ambassador for Christ that I can be! After all it's a task that's ours by appointment!"

The opinions expressed in this article are not necessarily those held by Cross Rhythms. Any expressed views were accurate at the time of publishing but may or may not reflect the views of the individuals concerned at a later date.
About Paul Davis
Paul Davis is a hugely experienced British journalist who in the '70s launched the UK's first Christian music magazine.