GreenJade: The British hip-hop team calling it a day after 18 years

Peter Timmis spoke to long running hip-hop act GREENJADE as they prepare to release their final album and play their last ever show. 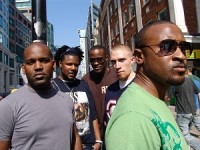 This month one of the UK's pioneering holy hip-hop acts GreenJade will release their final album 'Movement To Progress' and play a farewell show to a packed crowd at the Mass venue in Brixton. Since the early '90s the group - consisting of MCs Wei, Judah, 3rd Son, Wizdom and Secret - have released several well received albums and taken a strong anti-violence message into schools with their revolutionary Gunz Down project. They have worked alongside such acts as The Tribe, LZ7 and The 29th Chapter and opened shows for Delirious?. One Cross Rhythms reviewer noted, "GreenJade are one of the few groups that are constantly proving to the secular hip-hop fans that British Christian hip-hop is NOT sub-par." I recently spoke to Wiz and Judah from the group and began by asking them why GreenJade had decided to call it a day.

"We have come to the end of this season in our lives as a group," explained Wiz. "The fellowship will continue and individuals will make music on their own but it's hard to maintain anything without financial backing and our families have borne the cost of the group for many years now. Also, hip-hop is no longer the voice of young people in the UK and we didn't want to change our style to keep up. We want to go out with a bang rather than a whimper as we believe we have been a large part of the foundation of urban gospel music in the UK. We pioneered a lot of things, but pioneers seldom personally profit from their labour. We've had some amazing experiences and have been able to touch people's lives, now it's someone else's turn."

GreenJade began in the early '90s as a group of school friends drawn together through a love of music and dancing and at the time were not Christians. "Judah and Wei were watching a kung fu flick at Wei's house," recalled Wiz. "Wei suggested the Green Jade Sect would be a good name for a crew, and it stuck. Everyone began to congregate at Wei's (he was 18 and had his own place) on a Friday night to watch kung fu, freestyle, listen to hip-hop and smoke weed! School friends invited school friends and other talented artists from around South London seemed to be attracted to the William Bonney Estate in Clapham. Green Jade was first and foremost about brotherhood and friendship and then the music came as a result of that and it has remained that way to this day."

By 1994 GreenJade had grown to a 25 strong crew of friends, rappers, producers and DJs who would meet up at Wei's on a Friday night. "At this time the full name of the crew was the Green Jade Sect, which stood for 'Get Ready Every Enemy Now, Judgment Awaits Desolate Evil, Slowly Every Clock Ticks.' Deep, huh. . ?" laughed Wiz. "We loved our acronyms back in the days."

How did the crew become Christians? "One of the members of the crew was part of the Triads and got into some bother with some pretty serious people who were out to kill him. Things quickly deteriorated to the point where he had taken to walking around with a Samurai sword. It was getting to the point where the whole crew was about to get into warfare with the other side but something unexpected happened; a work colleague of the member saw his distress and asked him if he would like to pray with her at lunch over his problems. Although sceptical at first, he tried it for a while and the heat began to cool off! So he started to go to church and the problem disappeared completely. He then gave his life to Christ and came back to the crew to explain his experience. Most of us weren't really listening but this member had one of the loudest mouths in the crew and was one of our drug dealers. So when he stopped bringing the weed and started bringing the 'Word', we began to pay more attention!"

Wiz continued, "This crew member eventually invited his pastor, Rev Reinford Carr of Solid Rock COOLJC, to speak to the group, who explained faith in Christ in a very down to earth way. After that, members slowly started to check out the church and Judah was the first to 'give his life'! Now Judah was the biggest mouth in the crew, so between him and the other member, it was inevitable that the crew was heading for change. Over the course of 1995, 15 out of the 25 members gave their lives to Christ and Green Jade changed forever. The crew basically split in two with no animosity and eventually became Urban Gems and GreenJade (having dropped the 'Sect' for obvious reasons). Some members who gave their lives backslid and left, some went to other churches, while others stayed but the passion for hip-hop remained. Our pastor had suggested we give hip-hop a rest for a while and just focus on our relationship with God, but some of the guys wanted to go straight out there and start rapping as believers, which has had negative long term effects on most of them but we live and we learn."

The hip-hop team gradually slimmed down to five core members and, influenced by artists such as Big Daddy Kane, Ice Cube and NWA, released the albums 'Chronicles: The Story So Far" (2002), 'The Nu Jerusalem Project' (2005) (an album recorded with various artists like Jahaziel, Ekklesia and Prodigal Son), 'Life As We Know It' (2008) and, what is set to be their final release, 'Movement To Progress'. In addition the group have contributed tracks to several various artists' mixtape albums.

What tracks stand out as favourites? Said Judah, "I have a few favourites from across the 'Jade albums. From 'Chronicles. . .' it has to be tracks like 'Windz Of Amnesia', 'Backslide' and 'Zone' because they remind me of key stages in my life when I was becoming a Christian and what followed afterwards. 'Feel' from 'Movement To Progress' is a heartfelt track that looks into our feelings around situations in our lives, like fatherhood, divorce, relationships and how we have felt though our struggles. Whether right or wrong, at the time the feelings were tangible but the feelings about them do change over time and we have the opportunity to right our wrong feelings with God's help." Wiz: "I really like 'My Life' from the 'Give A Little Love' mixtape because I talk about my struggles with pornography. It was a bit scary putting that song out there but I've found a lot of men relate to it and it's an issue the body of Christ doesn't discuss in public a lot."

One key single in the GreenJade's career was "Gunz Down", released in 2006. The group toured London schools with a multi-media show that incorporated music, drama and film and aimed to educate children about the dangers of carrying knives and firearms. "Instead of going down the 'guns and knives are bad' route we decided to try and help young people to make better choices and give them an understanding of where bad life choices can take you," explained Wiz. "We had nine performances packed into one week because we all had to take time off work to do the tour as we had not been able to secure funding. We were doing it off our own backs!" The group continued to take the Gunz Down message into schools for five years and attracted a lot of positive attention. London Mayor Boris Johnson visited the tour, it was sponsored by Choice FM and resulted in GreenJade being invited to speak on BBC's Newsnight, Sky News and Channel 4's Weapons Commission. The Gunz Down performance has been seen by over 10,000 pupils between the ages of eight and 17 in over 20 schools across 10 London boroughs.

Wiz recounted, "At one memorable Gunz Down show a boy was brought to us (who we shall refer to as 'Steve'). Although slightly reluctant he said, 'I enjoyed the show, especially the part about retaliation making things get worse. The only thing is I think that message is a bit late for me!' I asked him why and 'Steve' went on to explain that his cousin had been shot and killed and he, his older brother and some friends had gone out for revenge, which resulted in his elder brother being shot and stabbed but surviving and his best friend was shot to death! Steve said that where he lived you had to be part of a gang to be safe but he wanted to get out of the gang but couldn't because his brother was involved and it wasn't something you could just leave. What we found all the more alarming was that he was only 15 and had taken to wearing a bullet-proof vest to school for protection."

Continued Wiz, "Along with XLP, his School's Pastoral Leader and Les Isaac's of the Ascension Trust (Street Pastors), we were able to provide support and mentoring for the boy and even went to his home and prayed with his family. Unfortunately, his fears for his life were realised six weeks after the tour when he survived being stabbed in the neck by an older boy in his school that was part of a rival gang. While we continued to work with him it was felt that the safest thing for his life was to send him back to Jamaica to stay with his father. He is there now and all reports are that he is doing well." 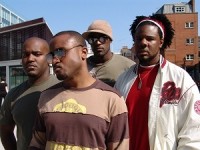 After such a groundbreaking and inspiring career what do the members of GreenJade plan to do once the group has played their final show? "I'm exhausted and will be having a rest," said Wiz. "I've been in GreenJade since I was 15, I'm 31 now! I've been a member of the group my whole adult and Christian life and I want a bit of break while I work out what comes next. We'll all still do music though. Judah has an album called '360' coming out early next year. Wei and I are working on a project with some Spanish producers under the name Liberty Grooves and Secret has a mixtape out now. Also, Judah and Secret will be releasing 'TruthSyrum Vol 2' later in 2011. We will keep the GreenJade website updated with all our upcoming individual projects."

End of an era. I was at the gig in Brixton and it was a very nostalgic, fun time. I can't say I'll miss them, because I tend to bump into them quite frequently. And I'm sure the new music will be great.