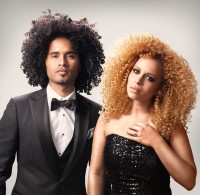 A lot has happened to the Florida-based R&B gospel and hip-hop team Group 1 Crew since Cross Rhythms last interviewed them in 2006. Group 1 Crew are now a duo, Pablo Villatoro having departed in 2011. The hits though keep coming. The group's fourth album 'Fearless' could well be their biggest seller yet. The group's Manwell Reyes and Blanca Callahan spoke to bibledude.net about 'Fearless' and the messages behind the music. Said Manwell, "We made this record reflecting on the fact that there would only be two of us and the fear of acceptance from our fans on whether or not they'd question the change or just roll with us. We knew that we could make the best record of our career if given the chance and so that's what we did. We harnessed all creativity and God-given direction and made something that excites us."

Added Blanca, "This new album definitely has our heart all over it. We went through so many ups and downs this past year leading up to the record. With marriages and new ministry opportunities to loss of close family members and going from a trio to a duo. All these circumstances played a factor in creating the music."

On beliefnet.com Manwell spoke about what the duo are trying to convey to their audience. "Obviously we pull from our personal views and perspectives. We like pushing the envelope even though on the global scale what we're doing is tame. But we do like warming people up to a different side of Christianity. This might seem trite, but I've always compared Jesus to sunglasses. We all see Christ through different eyes depending on who you allow into your life. If you put on Group 1 Crew shades or Building 429 shades, there's a different tint to how you see God. We obviously have a different tint. So when you put on our shades, our goal is to help you see God in a different way. We enjoy being that. We enjoy being different."

He continued, "There are so many people that live Christianity based on what direction the masses are going. I love to confront every ideology and ask, 'Do I believe that and why?' Even with our music, you can become scared of what people think and what people are going to say. But man, who wants to become a slave to another Christian? We're supposed to be serving others but we're not supposed to be enslaved by their opinions. It's one of those things we've been working on, just trying to have the freedom to be who we are. Music is spirit. Music is not words. Every song is produced with some kind of spirit. It's intended to invoke an emotion. Because we follow Christ and we want to live our lives wholly to him, every song we write is a Christian song whether we're talking about shoes or whether we're talking about the cross. It's a Christian song because it's coming from a Christian heart." 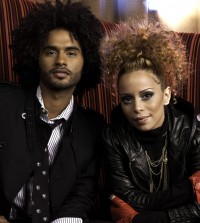 Since the group first landed on the scene with their 2007 album 'Group 1 Crew' both Manwell and Blanca have married. Reyes spoke glowingly about his wife. "I had horrible habits in the past and without her even having to try, she's already made me a better person. I love it. I love the idea of having a partner-someone who supports you and just holds it down when you're not able to hold it down. Our first year of marriage, we probably spent a total of four months together, maybe. That's being generous. But it feels good to have someone who offsets my lack. When we first got married, I was like, 'Babe, these are my plans for the year. These are the tours we're going on and we're not going to get paid anything. We're about to get paid zero money. I just want you to know that before we get into this.' She said, 'That's fine. I love you.' And she holds it down. I'm not used to that. I'm used to stressing. Before we had a business manager, I used to handle everything about the business and it was so stressful. But this year, I've just learned to let go and she's helped me to let go. It's been a blessing."

Blanca too is now married and is expecting a baby in August. Speaking about her marriage she said, "My husband is actually our drummer. It helps a lot. The bonuses are that we were able to spend the last two years together from the beginning. It's a lot of building and it's been great for our marriage. A difficulty would be, because he's my husband, it's finding the balance between business and family. He's always going to fight for me. He's always going to want what's best (for me), but at the end of the day, (Manwell and I) are like a family as well in this business. That's been difficult at times, but for the most part, I love it."

Amongst the many standout tracks on 'Fearless' is the song "He Said", a duet with Chris August. How did the duo enjoy working with the blue-eyed soul singer? Said Manwell, "Chris is a good friend so anytime we get to work with our friends it's always a blessing. It also helps that they're ridiculously talented like Chris. We're big fans of his." Manwell continued, "Our style always changes from record to record. On this one there's more singing in an attempt to expand our reach and gain new fans. It still has classic Group 1 Crew sounds and great party anthems as well as deep emotional songs that connect with real life on many different levels."