Group 1 Crew: And then there was one, Jose "Manwell" Reyes explains 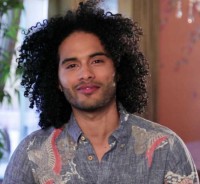 There are two good reasons why a chat with Jose "Manwell" Reyes of Group 1 Crew is overdue. One is that there is a new Group 1 Crew EP, '#Faster'. The second is that after various Crew members leaving down the years, the latest manifestation of the R&B, hip-hop and CCM hitmakers consists solely of Manwell himself. Manwell has recently built a home in Nashville but took time out to speak to Cross Rhythms.

Tony: Were you surprised when the group went down to one?

Manwell: What is it, three years ago? Pablo [Villatoro] had to step down, and that was just a decision we made as a group. Then recently, Blanca [Callahan], after getting pregnant, decided to step down as well - to do the family life and work on solo music. It's been a long transition, but not a bad one. When you're in God and seeing things happen, you either have to trust it's what God wants, or you freak out. And it's been awesome.

Tony: When Blanca made that decision, did you think of closing down completely?

Manwell: A part of me was like, 'Yeah, I can walk away, because I'm not in this for anything other than people'. That's what kept me in: I felt like the Lord just wasn't done. I started the group in 2003, with my friend Paul, and we added 13 other people. But when I got the call from the Lord - he put it on my heart to start this group - it was just me. So when it ended up just me it was an eye-opener. I'd put my stock in what other people viewed the group as, and it ended up just being me. The Lord was like, 'Remember that I called you before there was anyone - before there was even a name to this thing, I called you to do it. Just because it's you again doesn't mean the calling is not still there.' It made me take my focus off me, and who was in the group, and it made me focus on 'Why did the group even exist?' It became evident like, 'Man, this group was put together for people - for God's people,' and my heart was still for his people. So I was like, 'I can't stop! As long as the Lord continues to open doors, I'm going to keep walking, because my life is supposed to be poured out for his children, to help and encourage: this has been my gift. So that's my obligation; it has nothing to do with who's in the group, what face is in the group: if God's still calling, I'm still walking. 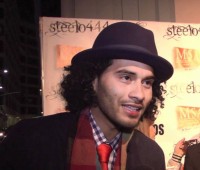 Tony: Blanca is an awesome talent. According to Group 1 Crew's entry in Wikipedia, her replacement is Sarah Sandoz.

Manwell: Sarah sings at Group 1 Crew gigs and is on "Psalm 23" on the '#Faster' EP. But Sarah is not Blanca's replacement. People thought this is the new girl, and it's not. Group 1 Crew is just me - that's it. I have a band behind me that can switch at any time: it's less about the faces in the group, it's about the heart of the mission. I don't want people to think I went out and tried to replace Blanca. You don't replace people, you just move onto the next season; and the next season is Manwell, who is Group 1. And then I have my Crew, which consists of my band. The new season, if you've heard the new music, is different. I have guys singing lead now, I'm singing soul songs; then I have girls; so it's becoming more of a sound that is very world universal. You never know what you're going to hear - you'll hear great woman vocals (on the EP there are vocals by Rachel Lampa and Moriah Peters), great guys' vocals (ditto Jonathan Thulin), great rap. It's all coming from my mind, and it's awesome. If you've heard Sarah sing, she's dope.

Tony: Is there a favourite track for you on the EP?

Manwell: They all hold a dear place in my heart. There are ones that get me more amped, more hyped. "Heaven" gets me hyped. There's a song on the second EP [to be released soon] called "Rise From The Ashes" which is an anthem I think people are going to love. There's also a song called "Elevator Doors" on the second EP where I rap for like four minutes I one continuous flow. I've been dying to rap for so long; my label's like, 'Yo, let's do it!' That's how I started off.

Manwell: The fact that we have a genre called Christian music is silly. Christian is not a genre, it's a belief. The whole labelling thing is what we do as humans, or as Christians: we need to be able to put things in a safe location. I think that's what denominations are, something to make us safe because there's rules in the boxes. You can't be in the box unless you follow the rules. I can't stand this labelling. Today, we have gospel and we have CCM. It's insane. I think the same thing: call it what it is - black music, white music, that's what it's been labelled as. These systems were put in place; people choose to live by them or not. I'm choosing to not. I don't like labelling myself, I don't like labelling other people - I just like good music. If you're doing good music - whether you're in gospel or CCM - I'll support. I'm listening right now to a group called The Walls Group; I really like them. I just bought their record yesterday because Chris August told me to check them out. I like it a lot." 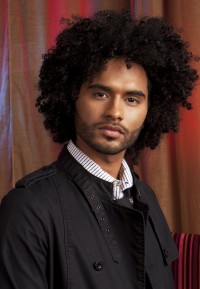 Tony: Group 1 Crew have come back with a bang. Are you doing lots of shows?

Manwell: Yeah. I'm out on tour with Big Daddy Weave; I'm also about to hit the road on the Rock & Worship Roadshow - a really big tour out here. And I'm coming out with records galore: I'm dropping two EPs then a full-length album in April. Then I'm trying to get my label to let me do a 100 per cent rap EP attached to the album. I'm going to hit people with a ton of new music.

Tony: Getting back to labelling, the Christian music world is also calling some music "worship". But in a sense all music made by Christians is worshipful.

Manwell: Yeah, that's what I think. I'm glad you said that. I think it's hilarious we label worship music. Worship is what you do in life! Do your worship in any form of music. It's crazy, because we literally will say, 'It's time to worship'. It's all a matter of the heart. It's insane; that's how it is, though.

Flash forward 3 years, and now Manny is "Panda$" and writing songs with parental advisory lyrics. These songs sound like anything else you hear on secular pop radio these days. I know the CCM industry is in the pits due to so many "worship" bands now, but why are true talents like Manny and Jonathan Thulin (now known as Andreas Moss) so completely abandoning faith-informed lyrics and music?

Thank you Tony Cummings for bringing us this article! Manwell clearly understands that this platform God has placed him on is where he needs to be. As I was reading the questions and comments I couldn't help but smile and say," I know that's right!. Christianity is not a genre, it's a belief. This is Christ being shared through the heart of a servant. He knows what his gift is and is gives God all the Glory. I agree with you Manwell 100%, you can't stop! As a Christian mother, a grandmother and a substance abuse prevention educator I say, "Thank you!!! from the bottom of my heart. I often see youth trying to fulfill their needs through drugs and It breaks my heart. Your cds have been great way for me to connect with these kids and way to talk to them about God. I will continue to pray for your ministry, your marriage and those that are connected to you. God bless you! Jackie