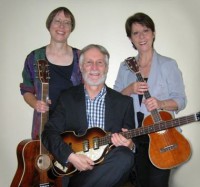 One of the most significant areas of growth in the whole Christian Church is the rise and rise of Messianic Judaism. According to the latest figures there are today over 350,000 Jews who have accepted Jesus as their Messiah. This thrilling spiritual revival amongst Jewish peoples has been accompanied by a steady stream of music releases. Messianic worship albums have been around since the '70s, the pioneering Jesus music group Lamb made their first album in 1973 while ensembles like Jews For Jesus and Star Of David Singers awakened the whole Church to the Jewish roots of Christian music. In more recent times American record label Galilee Of The Nations has been instrumental in assisting the Messianic Jewish community in making known their worship music. Now a top rate Messianic group has started in Britain. The trio Hebron are based in London and have recently released their first album, 'For Such A Time As This'. The CD is musically a pioneering release for alongside the Jewish folk music and "Hava Nagila"-style rhythms Hebron have brought folk, jazz, blues and even bluegrass elements into their music so that the Cross Rhythms reviewer enthused that these "three talented musicians have delivered a first class album."

The musicians in question are Simon Elman (vocals, bass guitar), Chrissy Rodgers (vocals, acoustic guitar, six-string banjo) and Helen Shapiro (vocals, ukulele, tenor guitar). Helen will of course be a name instantly recognised by fans of '60s pop music. Huge hits like "Don't Treat Me Like A Child", "You Don't Know" and "Walking Back To Happiness" sent her soaring into the charts at the age of 14. Decades later Helen was receiving critical acclaim for her fine jazz performances and albums while today she still finds time to undertake Helen Shapiro Gospel outreach events but it is her work with Hebron about which Cross Rhythms wanted to talk to the veteran singer.

It was Helen's friendship with Chrissy Rodgers which was eventually to lead to the birth of Hebron. Chrissy was born in Pittsburgh, Pennsylvania and was converted out of nominal Catholicism in 1974. Soon afterwards she became a member of the influential Star Of David Singers. In the 1980s Chrissy relocated to Britain. Explained Helen, "Chrissy is somebody I've been praying with every week for 20 years. She has helped my husband and myself no end and is a lovely believer."

Chrissy relocated to Britain to join Prayer For Israel in 1987, the same year that Helen became a Christian. Today Chrissy runs Manna Music, the record label which has released Helen's solo gospel albums. Explained Helen, "One night we were having our prayer night, in about 1995 or '96, and we were talking about Star Of David Singers and I said wouldn't it be great if we could form a singing group. And we went on from there. I said, 'What would we call ourselves? There's a group called Koinonia, I think that means fellowship.' So I said, 'What would be Hebrew for fellowship? And she said, 'Well, I suppose it would be Hebron. As well as being an important city in Israel it means friendship or fellowship.' We prayed into that and we had lots of confirmations and it just seemed to go from there. We prayed for that for 15 years." 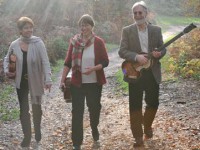 Helen continued, "I was starting to think a group was probably bit of a pipe dream. Then I really got a green light, a go ahead from the Lord, on Passover 2010. We already knew that we were going to ask Simon Elman to be part of us if it happened." Simon had been raised in a religious Jewish home in north London and was a professional musician. In 1979, after hearing the Gospel on the radio for the first time, Simon gave his life to Yeshua and from 2007 Simon had been working amongst Jewish people, telling them the Good News of salvation. Whenever they were able to, the trio rehearsed until finally in November 2013 Hebron made their first appearance in the humble surroundings of the Hanworthy Social Club in Wimborne, Dorset.

Strangely for a singer who down the years has played to vast audiences, the Social Club concert made Helen rather nervous. "I think there were about 200 people and it was very nervous making for me. In my case I had never intended, by the way, to be playing any instruments. I was going to let the others get on with it and I was just going to sing with them. But that was another thing that the Lord did. I used to play and mess around with ukes and banjos when I was about 10 with my brother and then I gave it up. I thought well, it's corny and in recent years I've noticed that ukuleles have come back into fashion."

Picking up a uke again was a learning curve for Helen. She chuckled, "I didn't even know you could get baritone ones and tenor ones and electric ones and all kinds. I was very nervous but the concert went well and we've done a few since. The idea of Hebron was yes, making the CD but to go out live and sing the songs but bringing each of our testimonies. Plus the Gospel message, obviously very important. It's very strong in there in between songs and also to teach a little about the times we're living in and the Lord's return. Hence the title of our album 'For Such A Time As This'. We do believe the Lord's return is not that far away. And are we ready? Believers and non-believers - are we ready? That kind of message."

It's a little ironic that Chrissy, who isn't Jewish, can speak Hebrew fluently while Helen and Simon only "know a few bits." Despite this, Hebron were able to record two songs in Hebrew, "Adon Olam" and "Hinei Ma Tov". Helen found the experience of recording 'For Such A Time As This' both a challenging yet a joyful experience. "Obviously, it wasn't a solo album and I was playing as well as singing. Talk about putting yourself in the spotlight. Cos I just strum, I don't do big deal things. The other two are the proper instrumentalists. But it was different in a very fundamental way in the studio. Neil Costello, who used to be with ICC when I used to record down at Eastbourne, that's all changed now, he's got his own studio in the middle of the country in Sussex. The control room is in the studio except it's not a control room it's a control desk and it's all digital so it's not faders and things so you're there, right there and it's all lovely and relaxed and atmospheric instead of running backwards and forwards. So that was a help, that was different. But just putting down the backing tracks was different - I've never done that before, I've always worked with other musicians and singing. Actually it was a smashing experience. If we ever get to do another one I shall look forward to that."

The album is far more eclectic than the albums labelled Messianic worship and thankfully has none of the overblown orchestrations which marred some American Messianic albums. Said Helen, "We didn't set out to make it a Messianic worship album not in such a specific way. It is Messianic. I guess purely from where we're coming from it's going to be that and the fact that we sing in English and Hebrew. There's so much being done in the Messianic worship scene and it's nice to know that not every Messianic song is an umchah umchah song. And also because Chrissiy messes around with banjos and things and I've got a four-string tenor guitar we kind of started experimenting with that. It's funny, some of it just came by accident. One of Chrissy's songs - 'They Overcame Him By The Blood Of The Lamb' - was always done on guitar and she bought a six-string banjo - I didn't know they existed - and brought it up to my place and was showing me and we started to sing because we'd been rehearsing 'Overcame'. And she said, 'Let me just try it on this.' Then she said, 'We've got to do this, we've got to keep it in there.' 'Arise, Shine' was very much a Pete Seeger-type folk thing. This is another one of Chrissy's songs. She came from a folk background. We changed it into that banjo thing. Anyway, we call it Messianic Jewgrass."

I have been enjoying Messianic Music from the very beginning, over forty years! Listening to Hebron, it was simply a breath of fresh air. It is so beautiful how you all come together as ONE with melodies, words and instruments. I cannot help and sing along with joy to my Creator. I do hope there will be a second, third CD . If you plan a tour to Southern Calif you must come to our congregation. avivjudea.org Shalom.

Hi Simon, we were in a Christian bookshop in Eastbourne today looking for my birthday present...a new bible...mine is falling apart....and Tony saw your CD....we are yet to play it but are very excited for you and having not heard from you both for a while, we do send a card at Christmas....would love to meet up soon and hear your music and testimony again.....god bless to all janet and Tony

Sorry to have missed the concert here. Does helen know that there is a song about her called miss Shapiro on the 1976 album called 801 live? A small honour.

We are very blessed to hear of Chrissy ministry, our daughter Rachel was a part of Star of David singers and we had lost contact with Chrissy. Give her our love!

For more on Hebron visit the Hebron artist profile