HELEN JAYNE MCKELLAR has returned after years away from the scene. She told her extraordinary story to Tony Cummings.

When in 1995 Cross Rhythms interviewed Helen Jayne McKellar (or Helen Jayne as she was back then), the CCM bigtime was clearly beckoning. After years of dues paying, small gigs and demos/independent releases only eulogised in the pages of Cross Rhythms, the Welsh singer/songwriter had landed a record deal with Word, with the Nelson Word American parent putting up the hefty recording budget. The 'Safe' album, with its tuneful, pop gospel, gained Helen critical acclaim, put her on the bill of major Christian events and put her pretty face on the cover of several magazines. But then came...nothing. The months turned into years. Eventually Helen Jayne became one of those "whatever happened to...?" artists remembered only by nostalgists and anoraks. Now, with the release of 'Give My Life' the seven year hiatus is finally ended. I asked this most gifted pop gospel communicator what had happened.

"My contract with Word actually included recording two more albums, but everything suddenly came to a halt when I was struck down by a serious illness that left me bed-bound. We realised there was no way I could continue working, and so reluctantly, we asked to be released from my contract with the record company. As shattering as it felt to suddenly lose my career and my health all at once, it seemed the most sensible thing to do for everyone concerned. What happened was my body couldn't keep up with the demands I was placing on it. After a series of viral illnesses I hit rock bottom. My immune system couldn't function properly and I was eventually diagnosed by a hospital specialist as having Chronic Fatigue Syndrome/ME. My mum and step-dad, Doug (Helen's manager) and my sister took it in turns to look after me over the next few years. It was a terribly difficult and heartbreaking time for everyone. My last live gig was at Spring Harvest in 1996, after which I felt like collapsing. My last TV performances were in April 1996 on BBC1's First Light - after which I arrived home from Manchester and literally did collapse!"

I asked Helen how she is coping with her illness now. "I won't pretend it's not difficult. I've had to learn to manage my life very differently. Some days I still feel desperately ill - usually when I have 'overdone it'. This can be very frustrating at times, especially when I think about the things I would love to be able to do and just can't. Sometimes even 'normal' everyday things that I used to take for granted, like cleaning the house or pushing a supermarket trolley, can wipe me out for days and I end up back in bed. I have in the past tried various exercise routines, but these can be damaging too. The best exercise for me at present is taking my dog for a short walk when I am able to.

"Every day I ask God to give me grace to cope with this illness, and trust him to help me achieve what I can. My faith and relationship with the Lord is stronger and deeper than ever. I have personally proved that 'Nothing can separate us from the love of God which is in Christ Jesus...'. (Rom.8:39) If we are true Christians we really are inseparable from the power of God's love. Every day I count my blessings and thank him for my strong marriage, my supportive family, my closest friends. The other way I cope is by distracting myself from myself! Having a sense of humour is important in life - laughter is a great medicine. 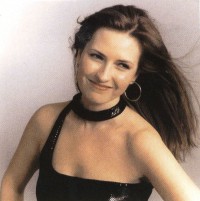 "A lady doctor who is a lovely Christian has been very supportive to me recently, giving me advice on how to manage the little energy I do have. Over the final stressful months of producing my new album, it has been great to feel a bit answerable to her, because I know she would tell me off if I crawled in to one of my appointments with her! I can't hide my fatigue from her - she can tell how hard I've been working, usually by my slow responses in conversation. It sounds funny, but with ME your brain can actually stop functioning at times, which can be very embarrassing when you have just started a conversation with someone who doesn't understand the condition. Apparently it is a common symptom. I try to prevent that happening, but if I do 'shut down' I know that only rest will cure me.

"My doctor said it is very probable that I will always have this condition, but my gradual improvement keeps us positive about it. I can't tell you how grateful I am to have become this well. And I know that health and well being is more important to God than any calling or career. I have learnt the secret of being contented, positive about life because of my faith in Jesus, and I'm not afraid to endure bad times because I know for a fact that the Lord is right beside me no matter what happens."

In view of her illness the recording of 'Give Me Life' was a hugely daunting project. "The whole project was taken slowly over a period of two years. We started off the recording with the intention of making a few high quality demos, to help restore my confidence, which I had completely lost. We thought it might be a good idea for me to concentrate on being a songwriter and publish my songs for others to sing. At that time I didn't dare dream it would become a second album. Very often working on the project made my condition temporarily worse. The good thing was, the deadlines were in my own hands this time, so I didn't have that particular pressure. The only time I got upset was at the end of one day's recording, when I discovered that I'd left the studio door open and Jack (my dog) had gone in and mistaken my expensive headphones for one of his chewietoys!"

The gigantic two year effort represented by 'Give Me Life' brought its reward when she heard the playback. "When all the recording work was finished and the weeks of mixing, mixing, mixing were complete, we took it to be mastered at a studio in London. I felt a real sense of relief and excitement when I heard the actual finished product before it got sent off for pressing. I congratulated the guy who had spent a day and a half doing the mastering and said I thought he'd done a great job but that I probably wouldn't listen to the album again now! He laughed. I'm a bit of a perfectionist when it comes to my songs, but then once everything has been done to the best I know we can achieve, I let go of it. The most important thing to me is that I know that before I sang every track I prayed for God's touch and anointing on my voice - not for me, but so that others would be blessed."

In view of the trials a certain bitterness towards God might be understandable. But Helen is adamant this hasn't happened. "No, I don't get angry with God. I talk to him. There are times when I really don't understand and I am temporarily overwhelmed by a sense of grief when certain things happen, like the recent tragic events in America for example. But anger often leads to harm. So I don't get angry, I tend to get emotional and cry out to the Lord in prayers. How can we get angry if we base our lives on God's promises to us in his Word? I think if we all asked God to help us see life and think of our lives in eternal terms we would get things into perspective."