One of America's most fiery gospel exponents HEZEKIAH WALKER recently burst into Britain for a couple of concerts. Mike Rimmer was there to "have church". 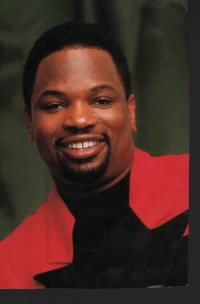 Performances of gospel music are famous for being church rather than concerts. Hezekiah Walker and the Love Fellowship Crusade Choir fit snugly into this tradition perfectly. The Great Hall at Aston University in Birmingham is humming; sometime it's difficult to tell where the stage performance ends and the audience participation begins.

A mix up with the hall's seating plan means that it's wall-to-wall and standing room only and people are determined to "have church". A sense of anticipation for Walker's second trip to this country has been running high and the crowd aren't disappointed. Three songs into the proceedings and Walker's band head off 100 miles an hour into a gospel stomp and everyone goes wild. Actually, the crowd spends a lot of time going wild and it's brilliant! Next to me, my girlfriend is getting so into the groove that she's convinced that a black woman lurks inside her white body!

Walker is a busy man because he balances his singing with his responsibilities as the pastor of a church. He pioneered the church in 1994 with only 20 people and today it has over 600 members. He is attending Bible College and recognises it's all a challenge. "I have a lot going on in my life," says Walker. "I love the Bible school and I find it helps my singing. The more you know the Bible, the better you can sing." I wondered whether his singing schedule got in the way with pastoring the church and he explains, "That's where my wife comes in, she steps in and takes care of the job!"

Someone else must be taking care of business at home right now because for the British tour as well as travelling with a 40 member choir, Hezekiah is here with his wife Monique, who is a featured soloist, and the shy but gorgeous KyAsia, his two year old daughter. During the interview Hezekiah takes time out to bounce KyAsia on his knee and whisper to her as she has the luxury of spending time with daddy. His own childhood was spent in Brooklyn, New York as part of a strong and strict Christian family. As Walker recalls, "We were made to go to church and made to do the things of God and eventually when I got older I began to love it! I guess the Scripture came alive, you know, train up a child in the way that it should go so that when it gets older it won't depart from it." Music was an important part of that upbringing and Hezekiah sang his first solo in church at the age of eight. Right then, he knew that gospel was the music that he wanted to perform. That's not to say that he was consistently walking with God through his youth. "When I got of age," remembers Walker, "my mum said, 'Okay, you don't have to go if you don't wanna go,' so there was a period of time when I did leave for a little bit and tried to hang out and do a lot of things but I heard the voice of the Lord and I came back in."

It is easy to see how his own experiences have influenced the direction of his ministry. Hezekiah maintains that his biggest desire is to win people to Jesus. "I think my mission for the last two years has been grabbing hold of people who have left church," comments Walker. "Not only those who have left but also those who are physically still there. There are many people who are physically in church who are not there! I think that my job has been to get people to turn around and get serious with God."

It could be a cliche but I couldn't help wondering if he was trying to reach the streets of Brooklyn, wouldn't a more contemporary or urban style of music be more effective? Why sing gospel? "I think gospel is the best music to be able to draw people together as a unit of all races. I think gospel music is also a tutelage for people to get to know Christ so I think that's the music that's the drawing card."

Hezekiah pursued gospel music and The Love Fellowship Crusade Choir was started with 12 members in 1985 and didn't achieve overnight success. Instead they grew slowly. This slow build up is seen as a very good learning experience for Hezekiah. "It's always good to start off small," he says, "and then end up big. I handled things the way I thought they should be handled and put God first and it all worked out."

After initial studio albums Walker has made a name for himself with live gospel albums recorded in Toronto, Atlanta and the latest in New York. The live environment obviously works best for him as he says, "I love the atmosphere. When you listen (to the album), it's almost as if you were there. I think the studio takes away from that." Listening to his albums, they're certainly fresh and exciting and those in Birmingham who were looking forward to an evening of invigorating gospel music weren't disappointed.

The choir were well disciplined and sang passionately with a fine line in moves to go along with the songs. There is something dynamic about 40 people choreographed to move and sing in unity. As new heights were reached musically or new dance routines were unveiled so the brothers and sisters in the audience hollered and clapped and got down to the business of enjoying worshipping God. The set was mainly taken from 'Live In New York' with a selection of favourites from previous releases and some gospel standards.

Even within the rehearsed confines of a large gospel choir, Hezekiah is sensitive to the Spirit of God. One song, "Come Home", was extended to over 20 minutes as Hezekiah called forward those who wanted to get right with God or those who wanted a fresh anointing or healing. Reflecting his church ministry, he laid hands on those who wanted prayer while the choir kept up the song and the intensity of the moment Hezekiah and the choir don't simply sing, they minister!

Something of the excitement of experiencing Hezekiah Walker was captured on the Grammy-winning 'Live In Atlanta'. For years, Walker had dreamt of winning an award yet at the ceremony he hadn't prepared a speech! He managed to say "Thank you" before scuttling off with the award which now graces the Walkers' mantelpiece. What about the night itself, what happens at the Grammy ceremony? "You all come together and have a little reception time, you eat and greet each other and then you get ready for the ceremony and it goes through two hours of giving away awards and performances." It also gave Hezekiah the opportunity to meet some of the stars of the awards like Gladys Knight, R Kelly and Boyz 2 Men. He has strong thoughts on the opportunities that awards ceremonies bring: "I think commercial success is excellent because anywhere you can get into you can just bring Christ with you."

For his 'Live In Atlanta' album Hezekiah managed to recruit someone who is no stranger to the Grammies, BeBe Winans. BeBe was guest vocalist on one song however the connection wasn't a showbiz one. "We're friends by association through my wife. Actually, we're family and he's very close with my wife. As soon as we heard "He's On Your Side" we knew that was the one for BeBe."

With the Grammy award and some best selling gospel albums under his belt, Hezekiah Walker has come a long way since the early days of his choir. I wondered if he recognised that people treated him differently now he was successful. He reflects for a moment before answering, "It is really difficult at times because I am not looked at as being a human being. And I am! The people close to me have accepted the popularity and accepted the fact that I belong to the public also."

His most recent release 'Live In New York' saw Walker recording on home territory for the first time in nine years. "I was glad to be home and people came form everywhere and the intensity and just what was happening in the air, that was great. Everybody in the choir is from New York so they were very happy to be home and people were pulling at us and saying 'Way to go!' There were 4,000 people in the auditorium!"

There weren't quite that many people in Birmingham but what they lacked in numbers they made up for in noise and enthusiasm. I wondered what Hezekiah made of the British gospel scene? "I haven't managed to hear much of it," Walker says honestly, "but from the scene that I've seen in the gospel industry the few times I've been here, I love it! I love the way they are excited about gospel music. I love the way they turn out and I love the way they worship."

With that in mind and Hezekiah's enthusiasm for live recordings, surely it would be a great experience to record an album live in Britain! "Yes! Yes!" Walker says emphatically. "As a matter of fact we're looking to record live in London at the end of the year or maybe early next year. We're leaning towards the end of this year." Hezekiah Walker and the Love Fellowship Crusade Choir Live In London - now that's a gig worth saving up for!