Holland Davis: Worship and the Word from Californian singer/songwriter 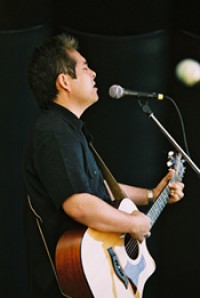 Tony: Who is Holland Davis? Can you give me your biography prior to joining Calvary Chapel?

Holland: Prior to coming to Calvary Chapel Costa Mesa I was the worship leader at Calvary Chapel Laguna Beach. Prior to that I was the marketing and A&R director for Maranatha! Music. I was responsible for putting together the WOW worship partnership between M!M and Integrity, Vineyard and Worship Together. I also started a series called the Top 25 Praise Songs - which has gone gold in the US. I also started a label called Worship Underground - most known for putting out David Crowder's first CD with all original songs. I'm also known as a songwriter - I wrote the song entitled "Let It Rise" that has been featured on the 'WOW Worship Blue' CD and is sung at Billy Graham Crusades, Harvest Crusades and Promise Keepers events. In the UK - I had a radio single off a project I was involved

Tony: Any sign of Calvary Chapel Music albums getting retail distribution in the UK?

Holland: We are actively pursuing distribution in the UK. We don't have any definitive plans at this time - we are patient but determined. For us the bigger value is that we don't want to go ahead of God's ministry. As God uses Calvary Chapels in the UK, then we believe that the doors for distribution will open.

Tony: You've been to the UK and ministered at the Creationfest. What's your perspective of the UK scene and what does Calvary Chapel hope to achieve in the UK?

Holland: First of all, we at Calvary Chapel Music love the English people and we love the great tradition of worship that has emerged from the UK. Worship leaders like Matt Redman and Tim Hughes - Graham Kendrick and Martin Smith all have had a tremendous impact on the worship community in America - including Calvary Chapels. I can't speak on behalf of all Calvary Chapels - as we are a fellowship of churches and not a denomination - but I can say that Calvary Chapels are known for two primary things - teaching through the Bible verse by verse and evangelism. Statistics show that in the UK over 40 per cent of the population do not believe in God at all. Of those that do believe in God and attend church services only around 10 per cent read their Bibles on a daily basis. That is one of the reasons we did a series on the Bible at Creationfest. We discovered that many people question the validity of God's Word and have serious doubts about its inerrancy and its authenticity.