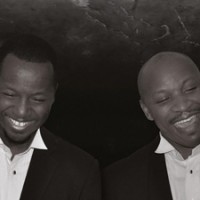 The release last year by Integrity Music of the 'Just Like You' album by Hutchinson & Gayle finally saw justice done for the creatively vibrant but often neglected Birmingham gospel scene. For despite being mainstays of Midlands gospel Delroy Hutchinson and Godfrey Gayle have had to wait patiently for years for their album debut. In fact, back in 2003 the hugely talented duo won the Best Gospel Newcomer award at the MOBOs with a prize of an Integrity recording contract. So why wasn't an album recorded and released? Explained Delroy, "In short, due to problems with the contract we didn't actually record anything as we chose not to sign on the dotted line."

Both Delroy and Godfrey were born in Handsworth, Birmingham. Delroy, who was brought up in the church, had made a commitment to follow Christ at the age of 12 and for Godfrey it was in his late teens. Godfrey recounted his early years in gospel music. "I got involved in music by singing with my local church group called Day Dawn. We sang at what I thought was a major event at Birmingham's Central Hall. That was the first group I ever sang with and the very first concert I had sang in. Then there was a male group called God's Own that I became a part of. Following this I became a part of the church choir which was called Merrybell Gospel Choir. With this choir I went all over the shop. Perhaps the most exciting place was America, where we toured, if you like, from New York, (Brooklyn and the Bronx) through Georgia, Maken and Atlanta all the way down to Washington DC. Then back up to New York. We recorded a couple of vinyls." ('The Merrybell Gospel Choir Vol 1', Independent, 1983 and 'Tell It To The People', Myrrh, 1985.) 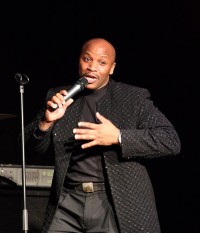 Around 1999 Beresford Dawkins and Del White started a monthly gospel event in Birmingham called The Well, which proved to be pivotal in the development of British gospel. It was there Delroy and Godfrey met. Remembered Godfrey, "Del's brother Benji wrote quite a few songs and we would perform them at The Well. It resulted in Del and I singing some of the leads together and it worked well. This is as much as I can remember as to how we go together and how Hutchinson & Gayle started. It just worked well."

Added Delroy, "All my memories of that period are pleasant ones. We were very committed to writing and rehearsing. In fact we would rehearse once a week every week with our band whether or not there were concerts in the pipeline. The band members were Clifton Hutchinson (first keys), Trevor Prince (rhythm and lead guitar), Ray Prince (drums), Ian Reid (bass guitar) and on backing vocals we had Subrina McCalla, Yvonne Kennedy and Tony Reid."

In 2003 Hutchinson & Gayle recorded a single, a soulful version of Stevie Wonder's "Heaven Help Us All" skillfully updated by keyboard maestro/producer Mark Edwards. Said Delroy, "We had a great time recording it at Orange Room Studios in Newhaven. Mark Edwards is nothing short of a genius."

After "Heaven Help Us All" things slowed down for the duo. Commented Delroy, "After quite a tumultuous period that resulted in Godfrey and I taking time out I contacted Godfrey and suggested that we finance our own album and release it ourselves which, after many months of prayer, we started."

Recording 'Just Like You' was a long, drawn out process. Explained Godfrey, "We had to do the recording ourselves with the great help of Brian Allen. Life was happening - Del's a highly sought after teacher working in an Academy in Sutton Coldfield and I work for Sandwell Council Revenues & Benefits. Plus, we were recording in Brian Allen's home studio for a couple of hours or so on available Mondays. What stands out in my mind about the 'Just Like You' recording sessions are the talks, sharing, prayers, community and friendship and laughter. This delayed the process, no wonder it took us seven years!"

So what do the duo hope to achieve with the release of 'Just Like You'? Offered Godfrey, "Our hope is to get into people's homes without getting in. We want to give encouragement to believers and insight to the un-churched."

The final word goes to Delroy, "When we felt like giving up on the vision we found added strength in the knowledge that God would bless those who would listen to our music."

Loved the article and was wondering if you know whether or not Delroy Hutchinson has a twitter account. He actually taught me A level Music at Archbishop Grimshaw RC School from 2000-2002 and I've wanted to get in touch with him since.

Hi Darren.
I hope your well. Did you/have you managed to make contact with Delroy Hutchinson ??