Ian: The US-based musician with a supersonic new album

Ian Eskelin, now known simply as IAN, has a new album out on Reunion. He spoke about it and his dance music past to Jan Willem Vink. 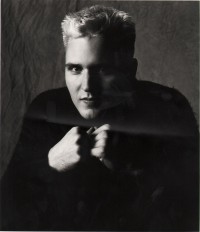 Scott Blackwell once called Ian one of the craziest people in Christian music, Ian's curriculum vitae definitely looks interesting, incorporating studies in communication, a four-month journey around the world, being one-time member of Code Of Ethics and Zero and recording two solo albums, 'Brand New Language' as Ian Eskelin and most recently 'Supersonic Dream Day'.

Although known as a solo artist, Ian definitely doesn't want to be associated with the three-piece-suite mentality of most of his colleagues. Says Ian, "When I blow into a town, I bring with me a full band, keyboardist, live drummer, DJ, and we get busy! This is not a sit down kind of show. I am excited about Jesus Christ and my relationship with him. I want other people to know that and to have an avenue for expressing their own joy in him." Commenting on the "craziest guy in Christian music" label, the 25-year old singer says: "Scott Blackwell pegged me as a crazy man because of my stage antics (and because I was stupid enough to jump out of a plane!). Whether the label holds true or not, I think there is a tremendous freedom in Christ. Christianity is not about a list of rules or regulations. It is a relationship! I try not to get bogged down in bickering over theology, denominations and a lot of the peripheral issues. I just strive to become more like Christ each day."

Ian has a serious background in dance music. In his teenage years, he performed with a band named Business And Industry, a band which played shows with the likes of C&C Music Factory and Information Society. While pursuing a communications degree at Wheaton College in Chicago, Ian became part of techno-pop act Code Of Ethics and recorded Zero's 'Ravenous' project. Recently he contributed remixes for Audio Adrenaline and Code Of Ethics for the Extended Play Remix singles, released by ForeFront.

Comments Ian: "In the midst of all this activity I felt like I had lost sight of God's direction for my life. I needed to take some time out in order to really seek out God's will for my life. I took a break from everything, bought an around-the-world plane ticket and travelled by myself for four months. I am by no means advocating this approach for getting your focus, but this trip was ideal for me. During my travels I went where God led me. I visited more than 18 countries, primarily in the Pacific rim and the Mediterranean and it blew my mind! It was during my travels God revealed the idea for ICE Ministries. In Southeast Asia, the Middle East and Africa, in particular, I saw opportunities to utilise music to reach people in nations where traditional missionary approaches have met with opposition. Even nations that deport missionaries welcome concerts, particularly those from western artists. People are curious about the music and it's no big deal that the musical hooks proclaim the name of Jesus Christ."

Two days after coming home, Ian was offered the opportunity to record a solo album. "I received a phone call telling me to get into the studio and record an album. The rest has been an outpouring of blessings and open doors." Ian's new album, 'Supersonic Dream Day' is more song based, and although still at times highly danceable, moves Ian beyond the solely dance label he once had.

Ian feels totally comfortable with his self-produced new album. "It's understandable, given the people I've worked with and the projects I've worked on that I've been pegged as a dance artist. That's never really been a label that I've thought fit me. I've always loved writing pop songs. That's really my speciality as an artist. Sure, I love dance music and the energy surrounding it. Many times, though, dance music gets into this rut where everything starts sounding the same. With my music, I've tried to blend the energy of good dance music with my passion for pop music, memorable hooks and catchy melodies.

"Musically, I'm definitely a product of the 80s, I've been influenced by artists like Kraftwerk, Gary Newman, Thomas Dolby, Depeche Mode and Erasure. I have always enjoyed electronic and keyboard based music. Lately I've tried hard to expand my musician boundaries and incorporate a lot more live instrumentation. I used more live instruments on 'Supersonic Dream Day' than I have for any other project I've worked on."

Ian is really pleased with the final results on 'Supersonic Dream Day'. "I think this record is a fairly good reflection of my music tastes and the direction I want to take as an artist. If that means larger popularity then I will humbly accept that. While popularity is good, in that it helps me eat and pay rent, it's not really that important to me. It is the ministry aspect that interests me the most. That's why I started ICE Ministries."

The songs on 'Supersonic Dream Day' contain an urgent plea for the church to unite. Ian sees a clear role for the church being unified with a clear purpose. "So many times, the church gets so wrapped up in inter-denominational squabbles that they lose focus of the church's purpose as the bride of Christ. If we aren't working together to effectively spread the gospel, then our efforts aren't going to be as effective or efficient. Despite the fact that there are countless denominations within the church, the unifying fact that ties us together is the person of Jesus Christ. Songs like "Get Live, Get Loud", "Start Moving" and "Everybody (Take Control)" are meant to encourage all who claim the message of salvation. They're fun songs that carry a simple but difficult message. They are meant as motivation and inspiration for the body of Christ.

In closing, Ian comments: "I have always worked hard to be the best that I can be. That is something that will never change. I plan to push my career as far as God allows. My prayer is that God will use my music and this ministry to reach people all over the world."