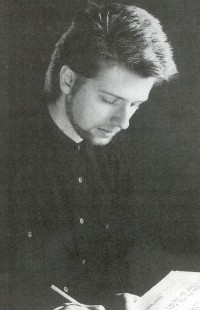 What do you think of when you think of Ireland? Guinness, U2, beautiful countryside, folk music in dark smoky pubs, a warm and friendly people? Perhaps you think of the Troubles, the religious bigotry, the bombs, the blood and tears of years of conflict. You probably wouldn't think of Ireland as a country with blossoming talent in the classical music field. Yet there are many fine young composers in Ireland, one of whom is Ian Wilson.

Ian was born in Belfast in 1964 and began composing 'serious' music while studying at the University Of Ulster. Up to then, Ian had been playing lead guitar and singing with a band called Night Watch, who were featured in the first issue of Cross Rhythms four years ago. For some years Ian wrote both classical pieces and rock gospel songs, with composing increasingly taking up more and more of his time, but it was not until Night Watch ended that he was able to devote himself fully to writing classical music.

Having learnt the tools of his trade, it took Ian roughly five years of hard work to develop his own unique style, bringing aspects such as rhythm, structure and texture under his control in order to speak with his own voice rather than copy the techniques of other composers. Not that this period of searching and experimentation was fruitless; many of lan's pieces from this period were entered into competitions. "Running, Thinking, Finding" (1989) won the O'Riada prize at the International Amadeus competition in 1991 and the Ultima Festival prize at that Oslo event in the same year. "Nine (Birds) Here" (1990) won first prize at the Arklow Music Festival in 1992. His successes have brought requests for commissions from many Irish classical musicians.

Having developed a style for writing music, Ian then set out to determine why he was writing: "As a Christian I have a responsibility to write music which is different from that of other composers, not only in its sound but also in its inspiration. It's an important point for me where my inspiration lies, for then I can feel that the music I produce, because it's rooted in my faith, can convey something to the listener of the values I hold dear... I feel a duty and a desire as a Christian composer to present an attitude of hope and the possibility of redemption."

Since Ian relies on commissions to help establish his reputation, he is not always able to use overtly Christian themes in his music. When he is able to work in a reference to his faith, he does: his first string quartet, "Winter's Edge" (1992), is inspired by the life of St. Paul the Apostle; in 1993 Ian wrote anthems for the Northern Ireland Girls' Brigade centenary celebrations and for the Two Cathedrals Festival in Derry, both based on texts from the Bible. Generally, however, Ian has to let his music speak of his faith by reflecting "the hope and positivity of the life to come in God" and by providing "a bright spot in a less than positive atmosphere."

lan's published output to date consists mainly of chamber pieces for solo instruments and small ensembles, a string quartet, several vocal pieces, and one orchestral piece, although another orchestral piece, "Rise", is in the pipeline. Ian is currently published and promoted by The Contemporary Music Centre in Dublin, the focal point for a great number of young Irish composers. In common with many of his contemporaries, Ian is not influenced by, nor does he seek to use, traditional Irish folk music in any of his pieces. His works are firmly European and Modernist. So don't expect his music to sound 'Irish'.

"Winter's Edge", string quartet no. 1 (1992) is probably lan's finest work to date. It is an expression of aspects of the apostle Paul's life (such as conflict, solitude, destiny and transformation) rather than a depiction of events in his life or even a portrait of him. The title is taken from 2 Timothy 4: 21 where Paul urges Timothy to get to him before the onset of winter. As Ian puts it, "the emotional dichotomy between the death Paul knew awaited him and the hope for what lay beyond that is reflected in the musical materials - at times violent, at times contemplative, but ultimately seeking to reach higher." The wide range of sound textures available from a string quartet are impressively
explored in the piece which is full of contrasts and conflicts.

"Running, Thinking, Finding" (1989) is another fine piece, this time for a full orchestra. Three distinct musical ideas corresponding to the three words of the title are developed and juxtaposed throughout the piece, interwoven and interspersed with the other themes. The work is, to the listener, virtually seamless, and contains a powerful sense of search as well as ultimate fulfilment. Being an abstract piece, we are left to draw our own conclusions, our own interpretations.

Ian has also completed a number of shorter pieces for soloists and ensembles. "Drive" (1992) is a duet for soprano sax and piano with musical style and rhythms reminiscent of Messiaen's music. Jazzy, syncopated music is contrasted with violent discordant passages which melt into peaceful music of almost Debussian subtlety. "Prime" (1987) is more of a duel for two pianos than a duet, full of conflict, a piece which periodically returns to its original theme, a theme which unites the two pianos in the midst of their conflict. "Bane" (1989) is an eerie, haunting piece for solo violin and digital delay which sounds like Paganini meeting Jimi Hendrix. Excellent stuff! More recently, Ian completed a tape piece for dancers Kazuko Hirabayashi and Yoav Kidder called "The Machine's Dream" which was performed in the USA last year. The result was a very impressive piece of ambient/electronic music.

As far as recordings go, "Running, Thinking, Finding" was recorded by the Norwegian Radio Orchestra in 1991, but the recording has never been available in this country. "Winter's Edge" has been recorded by the Vanburgh Quartet and will be released in the UK later this year. Hopefully, this recording should enable Ian Wilson to become as well known in mainland Britain as he is in Ireland, allowing more and more people to be touched by lan's music. I'll leave the last word to him: "I don't necessarily expect my music to change lives - it's music, not surgery - and yet I know from my own experience that music can have a profound effect on people, opening up new ways of feeling and thinking about things. If my music can achieve that, even in a few people, then I'll be very happy. However, my primary impulse to write is more for myself than for others - I see this as my best way to worship God, by effecting my praise to him through and in my music. I'm trying to temper my own spiritual needs with the desire to make others aware of theirs."