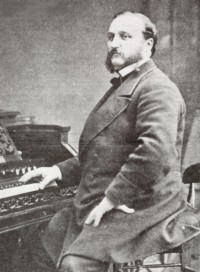 Ira D Sankey was still feeling his way musically, but some things were becoming clear. "It was while singing from the scrapbook, "Jesus Of Nazareth Passeth By", "Hold The Fort", "Jesus Loves Me", "Free From The Law"... that we began to fully realize the wonderful power there was in the gospel songs. The demand for them soon became so great that we were compelled to have them published in cheap form", he remembered.

It seems that a problem had developed when Sankey loaned out his "scrapbook" for people to copy the popular new songs; they didn't return it in time for Ira to use in the meetings. Something had to be done. He tried to interest S W Partridge, publisher of Phillips' collection of hallowed songs, to produce a new edition with the songs Sankey was popularizing. But D L Moody and Ira Sankey couldn't reach Phillips as he was in California performing. The situation was becoming critical. Sankey expressed his dilemma to R C Morgan, publisher of the religious periodical The Christian', who informed the singer that he could easily produce inexpensive words-only pamphlets in a couple of weeks.

Sankey lost no time thinking about it. He cut from his scrapbook 23 pieces, rolled them up and wrote on them the words 'Sacred Songs and Solos sung by Ira D Sankey at the Meetings of Mr Moody in Chicago'. In a fortnight Sankey had received 500 copies; they immediately sold out at sixpence each and more were ordered. The process continued to be repeated with each successive edition growing in size. Eventually, the little pamphlet would grow into a hard-cover volume of 1,200 pieces with music!

The songs that seemed to be causing such a rage were called Gospel Songs. The term gospel meant "good news" with the message of most songs of this genre focusing upon (1) a loving God who freely offers salvation to helpless sinners through the death of His son Jesus, (2) a Saviour who sustains believers amid the daily toils and temptations of this life, and (3) the blessed hope of eternal life in a blissful Heaven. The finer points of theology were generally muted; the message was meant to be clear to even the religiously uninitiated. A pointed chorus or refrain concluded each stanza driving home in summary fashion the simple message of the song. It was good news because it was available to all and it was free. There were no limitations of social station, education, wealth, or even past sins.

Philip Bliss' gospel song "Once For AH" was typical:

Free from the law, oh, happy condition,
Jesus hath bled, and there is remission;
Curs'd by the law and bruised by the fall,
Grace that redeemed us once for all.

Now we are free-there's no condemnation,
Jesus provides a perfect salvation;
"Come unto me", oh, hear His sweet call,
Come, and He saves us once for all.

Chorus
Children of God, oh, glorious calling,
Surely His grace will keep us from falling;
Passing from death to life at His call,
Blessed salvation once for all.

One reason for the songs' relative simplicity was that they originated in the genre of American Sunday School hymnody. By the early nineteenth century, children were being perceived as having ways of understanding which differed from adults. Singing the systematic theology of Watts or the rich Biblical allusions of Charles Wesley had little meaning for children it was thought; they needed hymns in a language appropriate to their vocabulary and more concrete ways of thinking. Thus from the 1840s onward there developed a new body of song particularly adapted to the American Sunday School. By the 1870s there was a flourishing market of Sunday School (often called Sabbath School) songbooks, publishers and successful writers. Chief among these songwriters were Philip P Bliss (words/music), William B Bradbury (music), Fanny Crosby (words), William Doane (music) and Robert Lowry (words/music).

Sunday School song texts also reflected a spirit of sentimentalism which characterized the Victorian era. This often focused on the death of children in a day when infant mortality still required having many children if the family name were to be passed on. Tuberculosis and cholera epidemics also made life uncertain; death was a common feature of life and it was not overlooked even in children's songs.

Musically, Sunday School songs differed little from the "pop song" style of the day as embodied by Stephen Foster. Tuneful diatonic melodies in the major mode supported by simple harmonies and slow harmonic rhythms characterized the style. When Foster penned various Sunday School songs late in his short life, they differed little from his secular output. While Foster was really never at home in the religious genre, he did inspire George F Root to compose in a popular style he called the "people's songs". This style of popular music encompassed many genres including Root's Civil War songs ("The Battle Cry Of Freedom"), school music, home songs ("Hazel Dell" with words by Fanny Crosby) and Sunday School hymnody ("Jesus Loves The Little Children", "Ring The Bells Of Heaven").

The connections between Root's "people's songs", nineteenth century gospel song and twentieth century gospel music are critical. Root, who was the foremost music educator of his day in the generation after Lowell Mason, had made a difficult decision.