When songwriter and producer Aaron Rice launched Soul Stride Records last year, alongside the initial set of releases by CCM star Ginny Owens and Brittany Hargest (formerly of the hitmakers Jump5) was an album by one of America's most praised gospel aggregations. Isaac Simpson & DP, from Columbus, Ohio, have built up quite a reputation since they began in 1998. Their director, lead vocalist and chief songwriter spoke about his and his choir's history. Isaac was born in Los Angeles, California. He said, "I was raised by my grandparents and what I remember was eating breakfast every morning with my grandparents before school. I have been saved since I was 12 years old. But my growth in Christianity was fully mature when I turned 30 years."

Isaac's involvement in music ministry came in a most unexpected way. . .and place. "My start was with I went overseas to Japan as an exchange student. There was a gospel group called Sounds Of Blackness that was on tour while I was there. Seeing this group minister motivated me to love music more. While I was in Japan God began showing me my life. I heard God's voice say he has called me to create a new group and a sound for gospel music and call it Divine Providence. That's when I got the name Isaac Simpson & Divine Providence. He took me thousands of miles away just to speak my life into existence."

After their formation in 1998 Isaac Simpson & DP quickly became one of the most admired youth chorales on the Californian gospel scene. Within a year they had recorded the album 'He Loves Me'.

By 2006 Isaac became a social worker in Ohio. Then a dramatic incident occurred which was to have a major effect on his life. He recalled, "I loved helping kids. There was one young man that kept in contact with me even after he became 18 years old. One day he called me while I was in the studio to give him a ride. I went to help this young man out not knowing that he was setting me up to get robbed. When I dropped him off, there was another young man that came from the alley and met this young man in front of my car. I didn't understand why the young man didn't want to get out of the car once we arrived at the destination. There was an exchange and the young man from the alley came to my side door and said, 'He said you have the rest of the money.' Right then the Holy Spirit told me to get out of there and drive off. The next thing I saw was the young man pull out his gun and fire two shots. One bullet went through the back window and hit me in my back. I managed to drive to an emergency room but they were unable to help me. However, they did transport me to a hospital where I was on life support for three days. I had 10 different operations and had to learn how to walk and breathe again. I heard God say, 'Don't forget to breathe. There is life, joy and strength in that breath.'" 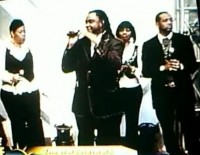 Around the time of the album's release Isaac expanded his activities and founded the Providence Academy For Student Success to help students from kindergarten through to 12th grade. The facility was meant to be a "charter school" where a private school uses public money to operate. Sadly, the whole venture proved disastrous for Simpson, culminating in lurid accusations being printed in the media that the musician had used school funds to build and operate a recording studio and put on concerts. Eventually Simpson was, in the words of The Columbus Dispatch, "kicked out of the charter school he'd created." Simpson commented about the whole debacle, "The school was a blessing but there were devils that wanted my success. I have learned that you have to be careful of who you allow in your season, spiritual and non-spiritual. There were things said about the school that weren't true due to the fact we were only two months old with over 380 kids, no money from the banks or State. God favoured us to have a 2.5 million dollar building. The Temple of Solomon caught the eyes from far away and that same thing happened to my school. I had to allow God to fight and step in for me and he did just that. What men might look at as a brick wall, God looks at it as a stepping stone to the next level."

In 2011 Soul Stride released Isaac Simpson & DP's 'The Process'. Cross Rhythms' reviewer commented, "It's a tightly produced and perfectly arranged album, packed full of up-tempo praise tracks as well as some superlative ballads. Part of the appeal lies in the mix of traditional gospel and more modern soulful sounds; the organ is particularly effective on "I Am God" and "Hide In Me" while Simpson's distinctive vocals enhance, rather than take over, the lead vocal work." Said Simpson about the album's concept, "If God doesn't see his reflection in you, you have to go back through the whole 'process'. I wrote 'Hide In Me' and 'Jesus Is Real' when things started happing in my life, like being shot or accused. I found that it's in these times that God can really teach you something and use you."

Overcoming the traumas of his past Isaac is pushing on. He said, "I'm working with other artists; I'm touring with 'The Process' album; and I've started a new campaign called Campaign Against Youth Violence, teaching youth how to deal with violence."