JJ Heller: Singing for the pretty and the plain 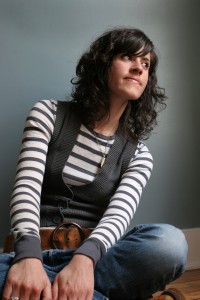 Of the tens of thousands of independent Christian music releases only a very small proportion get picked up for much radio exposure. So Californian singer/songwriter JJ Heller has already achieved something special with one song, "All The Beauty" from her 2006 'Only Love Remains' album and an amazing four songs, "Grow", "When You Come Back", "Small" and "Little Things" from 2007's 'The Pretty And The Plain' getting Cross Rhythms radio play. It is with some expectation that I arrange to meet up with this exceptionally gifted songsmith. Jennifer Judy Heller sits opposite me and explains that even her parents call her JJ. She was raised in San Jose, California, in the San Francisco Bay area and remembers, "I grew up in a Christian home so I was just blessed with the opportunity to grow up knowing Christ and knowing God's Word and having parents who love the Lord."

She was five when she first became a Christian but as you'd expect, it was the passing of years that helped her get serious about God. "As I've grown older, each year I've learned more about who God is. I think in college was when I really started establishing my own belief system and my own theology and started kind of questioning things, which I think is a great thing to do. If you don't ask questions then you're never really sure of what you believe. So that was a time when I really explored what I truly thought about things and made a commitment in myself."

She remembers and continues, "All of a sudden I was having professors who were really great about theological issues. They would present both sides and they wouldn't say, 'This is the right way.' They would say, 'This is one way, this is another way; you get to decide what you think is right.' It was good. I normally like being told, 'This is the way it is and you should believe it too,' so it was a good growing experience for me to be able to make my own decisions about things."

When it comes to the music, she was given piano lessons from the age of five years. "My parents asked me and my sister if either of us wanted to take piano lessons and my sister had no interest. I thought that it sounded like a lot of fun; the problem was that they didn't have a piano and so they started praying. I wish I could recall the story perfectly but I think my mom was in the church office and she didn't even tell anybody about it and somebody asked her, 'Hey, do you know anybody who wants a piano?' And so she said, 'Well I do!' So we went over and picked it up and they just gave it to us for free. So I took piano lessons from when I was about five to about junior high. I always liked music. I sang in the church choir and at school and I was also in a vocal ensemble at school."

Heller was also into sports so when she went to college, she played basketball and concentrated on sports because she wasn't confident about her musical abilities. She remembers, "It was really frustrating the way that God worked everything out because I went there thinking my role in the team is going to be the shooter because that was what I was good at in high school. I got to college and I just could not make a basket! I was so frustrated and like, 'Lord, why am I here? Why am I playing basketball and why did you take away all my skills?'" She laughs, "But looking back now I can see that God was changing my focus away from basketball and onto music. He was kind of diminishing my love for basketball so that he could focus me towards songwriting."

That songwriting started in the summer before her second year at college. She remembers, "I went on a mission trip to Africa and one of the girls on the team played the guitar; she taught me how to play a few chords. I'd always loved creative writing and poems and stuff but I was never really disciplined enough to sit down and write them, I'd just wait until they were assigned and I would really enjoy them then. So it was the perfect combination of things - I loved music and I loved writing and playing the guitar was a lot easier for me to write songs on than on the piano."

In the space of time between 2004 and 2008 JJ released a total of six CDs independently, 'Songs That I Know' (2004), 'Collection Of Thoughts EP' (2005), 'Only Love Remains' (2006), 'The Pretty And The Plain' (2007), 'Wake Up The World EP' (2007) and 'Painted Red' (2008). It's impossible to fault her work rate. So what is she trying to do with her music now? "I think really what I love to do is just encourage people. We got an email awhile back; she kind of nailed it on the head, what we were trying to do. She said that she really enjoyed the songs because it brought a sense of humanity to our faith. Sometimes it's good to balance the music, even the Christian music that you listen to. There's a lot of music that's just talking about the great things about being a Christian and being alive and praising God for all the amazing things that he's done and that's awesome. But I tend to write a lot of songs that deal with the challenging areas of life and I think that people feel comforted knowing that there are other people going through the same troubles that they're going through and they don't have to pretend they have it all together. I think it's good to know that there are other people in the same boat and that people are real and that life is hard sometimes but God's love is big, and big enough to handle whatever we go through."

Although I'd never guess, looking at the confident woman in front of me, Heller shares that she suffers from panic attacks. She confesses, "It's been a really hard journey because it's not something that you can just say, 'Pull yourself together!' I ask a lot of 'What if.?' questions; you know like, 'Well what if this happens?' 'What if the phone rings and I get some really bad news?' 'What if somebody I love gets in a car wreck?' To just know that when I'm worried about those things it's me wanting to control the future, and that's not my job. But it's so good to know that I am loved by the One who does control the future and he'll give me everything that I need to deal with whatever comes my way. And it really comes down to trusting that God's going to work everything out."

Lots of things fell into place for Heller when she attended college. Her faith became clearer and she understood that God wanted her to move into music and not sports. She also met her husband there. "We met through Campus Crusade For Christ at San Jose State. He was leading worship and I joined the worship team. I started writing songs at that time and as we started dating and then started moving towards marriage we really started praying about what God held for us in the future and if he wanted us to continue making our music. It seemed like a big risk, especially because Dave, he majored in photo-journalism and got his degree in that. He was even offered a job as a staff photographer at a big newspaper. So we had to really seek the Lord and see what he wanted for us - the safe comfortable future or if he wanted us to give music a shot."

She continues, "We really felt like if we were ever going to try music full time that then would be the time, right after college, right after we got married, when we didn't have kids or a mortgage or debt, you know; when we were used to being poor and eating garbage," she laughs. "So we went for it and thought, 'We'll give it maybe a year or so and if we're still really struggling and nobody seems to be interested in our music then we'll move on a get proper jobs.' But we've been going full time now for a little over five years so God just kind of keeps paving the way for us. It's been really cool to see that we have just enough hurdles and struggles to keep us humble and to make us realise that we're not the ones making this happen, but just enough success to keep us going and encouraged and knowing that this is the ministry that God wants us doing."

So when JJ enters a studio to record her music, what does she want her listeners to get out of a CD when they play it? "I'm hoping," she shares, "that people will get a sense of who they are because of who God is and to know that they are fully loved and accepted and that they can feel the freedom to live their lives and to go after their dreams. Early on I was surprised by how I would write a song about something that I was dealing with and just work it out in my own mind, about things that God was teaching me. Then I'd sing the song for other people and they'd say, 'Wow! That's exactly what I'm going through!' And that's the biggest compliment, when people say, 'Man, that song that you just sang, it felt like you wrote it just for me and it really resonated.' So I think music is a powerful tool and somehow the way that God made it, it just breaks down barriers. Things that you could never walk up to somebody and tell them; if you put it in a song it just comes across differently."