JJ Heller: The indie singer songwriter on her radio hits and Christmas memories 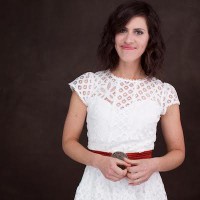 For the thousands of independent artists releasing albums one of the most consistently popular, at least as far as Cross Rhythms radio listeners go,,is Nashville-based JJ Heller. San Jose-born Jennifer Judy Heller has been a regular on the CR playlist since 2006 when we were broadcasting "All The Beauty" from her 'Only Love Remains' album. Now JJ is about to release 'Unto Us', a Christmas project funded by a Kickstarter campaign so it seemed a good time to talk to the singer, songwriter and mother about her music ministry. I began by asking JJ why she decided to record a set of Christmas songs.

JJ: My husband Dave plays guitar while we perform, and we also write all of our songs together. We were invited to be a part of our friend Josh Wilson's Christmas tour last year. We were doing our soundcheck before the show one weekend, and because we were in the Christmas spirit we started playing, "Have Yourself A Merry Little Christmas". Josh said, 'Can you please play that song tonight because that is amazing?' We said, 'Well, we haven't really practised it.' But it got us thinking about Christmas songs - how much I love singing them and how a lot of them are suited to my voice because they're nostalgic and sweet. We came off that tour and started writing Christmas music and fell in love with that idea. It's a special time of year. Dave and I have two little girls now; Lucy is seven and Nora is five. Having them makes Christmas new all over again. We love the idea of potentially having our music being the soundtrack to so many people's family Christmas memories.

Tony: What would you say to people like myself who love Christmas songs that deal with the incarnation, and really don't like sentimental Christmas songs irrelevant to the original story?

JJ: I just feel like Christmas is a wonderful time where people, no matter what they believe in, are surrounded by songs of the birth of Christ. On our album we decided to include both of those categories of songs. The point of Christmas is to celebrate the birth of Jesus; and it's also to make memories with our families and to be thankful for all the blessings that God gives us. Some of those songs you don't really like were songs that I grew up with, so they're tied to happy memories. We've included some of those songs, but we've also included sacred hymns like "Silent Night" and "O Come, O Come, Emmanuel". We've woven them all together, and we wanted the album to have a nostalgic, childlike wonder to it. We decided to have a children's choir sing on half the songs, so we feel like we captured the essence of that.

Tony: As you know, Cross Rhythms have been playing your music for years. In fact back in 2008 we played a total of four songs from 'The Pretty & The Plain'. Tell me about a couple of them.

JJ: My song "Small" has always been a favourite. Sometimes as a follower of Christ it's easy to forget how holy and how big he is. Sometimes as Christians we can reduce our faith to a good luck charm where we feel like, 'OK, if I do all the right things, if I'm a good Christian, then God has to give me the things that I want.' A holy Santa Claus up the sky, good little boys and girls get what we want - that's not the way that he works. He's so much bigger than anything we can ever imagine. That's what the song talks about. The chorus is, "I don't want to make you small/I don't want to fit you in my pocket/A cross around my throat/Because you are brighter than the sun/You're closer than the tiny thoughts I have of you/I could never fathom you at all." Even though God is the creator of the universe, he is still madly in love with us and knows our innermost thoughts, which just baffles my mind.

The song "When You Come Back" also has a special place in my heart. At the time we were writing that album I was just starting to struggle with panic attacks. Anxiety was becoming more and more a part of my daily life. I was praying that God would take away all of that pain immediately, because I know that sometimes he does answer prayer that way - right away - but for me, that's not how he answered my prayer. It was a really long, slow process. The song was talking about the hope that we have as Christians that no matter how dark this life gets, God has promised to return and to set all things right - whether we reach the end of our life and go to Heaven and get to spend eternity with him, or Jesus comes back in our lifetime and makes a new Heaven and a new earth. That's a hopeful song, knowing that God is going to return someday. All the wrongs we've experienced here will be made right.

Tony: The song Cross Rhythms picked up from your next album, 2008's 'Painted Red', was "True Things".

JJ: "True Things" is a song mostly keeping women and girls in mind. We especially struggle with self-image, body-image; we're always trying to present the best versions of ourselves, to be beautiful. The song is asking the Lord to remind us who we are. More than just what we look like on the outside, he has put something special inside each of us: we all have unique gifts and talents to share with the world. I love the quote "Comparison is the thief of joy" and I try to remember that often. I have a lot of friends in the music industry who have attained more commercial success than I have - whether more people come to their concerts, or they have more songs on the radio, or they sell more albums. It's such a temptation to compare myself to them and think, 'I'm not as good as them', or 'That's not fair'. But it's a trap. That's not my story; that's not the story that God has given me. We've been given our own lives, and the Lord wants us to live our own lives and not try to live someone else's.

JJ: I wrote that song for a friend of mine who had just experienced a lot of tragedy and loss in her life. I attempted to write that song from her perspective. Sometimes, as Christians in the church, we don't always feel safe or comfortable talking about our struggles. We show up at church on Sunday and we want to put on a happy face, because we look around and everybody has it all together, their lives are perfect. We feel pressured to appear that our life is perfect as well. I like writing songs about the difficult parts of life to let people know that they are not alone in their pain - and they're not necessarily doing something wrong, they're not being punished - but it's just a part of life. God is there too. He uses our struggles and he uses our pain to get us to come to the end of ourselves. I know for myself, when I'm really struggling, or if I'm sad about something, those are the times when I'm reminded how much I need Jesus; those are the times when I really crush into him. I read my Bible more, I pray more, because I need him. It's not that I need him any more when I'm suffering as when I'm doing well, it's just I'm faced with that need and I can't ignore it. The song talks about coming to the end of yourself and realising, "I don't have anything left to give, but this is where I'm offering my life to you, Lord, because I can't do it anymore. You need to help me."

Tony: In 2012 we were playing the title track from your album 'Loved'. Presumably that's a song about God's love.