New American rock singer/guitarist JAMES CLAY has had an intriguing journey to get to his album debut. Mike Rimmer spoke to him at Spring Harvest. 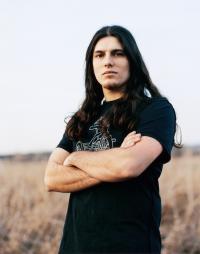 The release by Inpop Records of James Clay's self-titled album has brought to the international audience an exceptional new rock singer. With the kind of bluesy voice many rock icons would kill for, James is a product of Missouri's bar rooms turning out cover versions for a not very attentive audience. With a dead end day job things weren't looking great for the singer/guitarist. Then the Lord spoke to Clay: "He told me to quit playing in bars and join the worship band at church."

James Clay grew up in North Carolina and from the age of 10 after his parents' divorce, he belonged to a strict evangelical church which he describes as "controlling". Hearing about his background, it is amazing that he ever discovered rock'n'roll. He remembers, "It got very controlling as to what you could watch. There was no television, no radio, just studying the Word. In fact, no other schooling for the rest of my life except for the Bible. I don't have a high school diploma, so everything that I know I went to a library and taught myself. I do know the Word because of it, however."

The strictness of the upbringing led to some bitterness for James towards God. "I was allowed to play the guitar but it was frowned upon by the other people in the church. I would sneak in at night and listen to my radio and sneak some classic rock. So every one of my musical influences was like sneaking a chocolate. So music has always been a total release for me, playing it and listening to it. When I was living in that situation where it was very controlling I would write songs about theology, or about life or about whatever I wanted because no matter what I said in talking, I always felt like I was judged, critiqued and told how to think. But if you write a song what is somebody going to do.write another song to argue with you? The one reason I love music is because there's no argument, the song is what it is, like it or don't."

After getting married to a strong Christian girl, Clay's own faith hit crisis point. He was working by day in a turkey plant and playing music at weekends. The routine was soul destroying: "I hung the turkeys live onto an automated line where they went and met their demise." He pauses, "I couldn't eat turkey for quite a number of years." On his debut album, the song "To Be With You" was written at this very dry time in his life. He explains, "The only musical release that I had for myself was playing on the weekends at pubs and clubs doing covers of Hendrix and Zeppelin and Janis Joplin and all that classic rock thing. I just found that I was spending all of my energy learning covers and practising other people's music that I wasn't writing that much. 'To Be With You' came at the end of a period where I decided I really wanted to stop working on other people's things and do what I felt I had the gift to do. It was really cool that it was that song that I wrote because it is God speaking directly to me saying, 'This is what I've done to be with you.'"

The song also proved to be a spiritual awakening for Clay who had spent a great deal of time questioning his faith. He spent a dry period in his life where he asked God to prove himself. In the end music became a key to James' spiritual revival. "Since I was five years old I've been writing my own songs, singing little silly stuff but it was always my dream to be a singer/songwriter. It was what I felt most comfortable doing but I never thought that I was ever going to do. It was my mom's opinion that I was just going to work hard the rest of my life, which I've done. I've done everything from milking cows to cleaning chimneys! But God opened the doors for my music and gave me a beautiful family and he's proved himself to me."

Clay claims that his Led Zep covers band was one of the best out there and that he did a mean Robert Plant impression. Listening to him singing on his album, there's no doubting the power of his vocals! Ultimately to get out of the rut of the turkey plant and the weekends playing covers, James came to the end of his dry period by choosing to seek out a pastor. Clay submitted his life to the man of God who then asked him to play on the worship team. "When I was playing one Sunday," he recalls, "there was an old Christian rocker named Mylon LeFevre speaking at my church. He heard me play 'To Be With You' and asked me if I had a demo. At the time I didn't. I was still working at the plant this whole time. So I made a demo and a lovely lady at my church donated the entire cost of the recording the demo. After it was recorded, Mylon came back and I handed him three copies. He just happened to be going the next day to visit his son-in-law in Australia, who is Peter Furler of the Newsboys. Peter Furler co-owns Inpop Records and he is now my boss."

The Christian music scene seems to be packed with bands made up of young kids whose fathers are church pastors. It's refreshing to talk to a guy who has some wider life experiences. Clay observes, "I've run into people in the music industry who don't like to sign autographs for kids. They act perturbed when some kid comes up and asks for their signature. It's like, apparently you've worked a job a day in your life, and prayed every morning, 'God, please give me 1,000 kids lined up around the corner to sign autographs for.' It's better than one day hauling concrete, I'm extremely grateful for what I do and I love it."

Better than hanging turkeys. So how did he do it? Don't turkeys fight back? "Oh they'd beat you to death!" he muses, "They really do. I've got a lot of respect for people working in meat processing and all. Turkeys are pretty rough! You've got bruises all over your legs and on your back; you're completely covered in turkey.uhmmm.stuff!" So didn't he think of becoming a vegetarian? He laughs, "I don't believe in that! You can definitely not eat turkey! It's all in the state of mind! Beef steaks are great but I've never worked in a beef processing plant so." But James has also milked cows. Can he do it by hand? He's confident. "I can milk by hand. I can. But I wouldn't recommend it. It takes forever and your hands will lock up! I did 110 head a night on a milking machine."

These days you won't find James Clay working with livestock. Instead he's on the trail taking his music to anyone who'll listen. But what is he trying to do? "I want to make people ask all the right questions," he responds. "My songs are more about making people think. I want to make people ask questions like, 'Am I going to church because it's a club or because it really does set me free?' 'Do I believe this because I've been taught it my whole life, or do I believe it because God really works in my life and faith is moving mountains for me?' I think that's what I'd like to convey more than anything else in my music. I absolutely believe that if they ask God to prove himself he will."

But isn't there also a danger in asking the wrong questions? Is it possible that some in his audience might not be helped by the process? "I've been down some roads that I shouldn't have gone down", he confesses, "but 'all things work together for the good of those that love him and are called according to his purpose.' If you believe you're called according to his purpose, which everyone is if you truly think about it, then things are going to work together for good for you. My questioning is not to ask people to question whether or not God is there and loves them, but a lot of it is to question the 'religious' things that they've always been taught."

Clay's own escape from a very religious legalistic background has left him spiritually wiser and his work experiences have made him uniquely gifted as a communicator when he meets ordinary people. Listening to the debut album, his songwriting, edgy music and powerful voice are the things that leave an impression.

On Cross Rhythms radio we've been playing the album's opening cut "I Still Believe". It's a cover version but somehow it sums up a lot of Clay's journey where despite everything, this is one believer determined not to give up. "I remember the Russ Taff version," admits Clay, "and then I heard the original after that. Peter Furler suggested I do the song. He admitted that he has trouble singing the song and told me if I could carry it off, I'd be the man!" Looks like James Clay is definitely "The Man" then!

Where is James Clay now???

I grew up in a trailer park outside of Lebanon Missouri, and was told that james clay lived there at one time. is this true?

i was wondering if James Clay ever lived in or around the Lebanon Missouri area... because my uncle, Ronald Sutton, said that he grew up w/ him in Franklin Trailer Park.

hi can you help me