James Gardin: Releases as P.H.I.L.T.H.Y. to a stream of Cross Rhythms radio hits

Tony Cummings spoke to the Michigan-based rapper, singer and producer, JAMES GARDIN, about his life in music 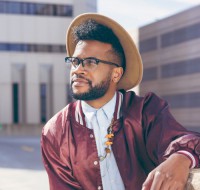 There are today hundreds, if not thousands, of independent Christian hip-hop artists pouring out floods of singles in their efforts to catch the ear of Joe Public. Very few such releases get heard on radio, and even fewer get any kind of international exposure. However, James Gardin, from Michigan, has already clocked up several Cross Rhythms radio hits with the singles "Home", "Groove", "Promise Land" and "Joy", and such is his ability to wed catchy vocal hooks to skilful flows that the future looks bright for this talented emcee.

Gardin was born in Germany to parents in the army before moving to Arizona at four years old, and settling into Lansing, Michigan at 10 years old. He got involved with music early through church choir, guitar lessons from a mentor, and his first raps as part of an anti-drug song competition. After failing a fifth grade test to play violin at school, he took matters into his own hands and dug into books to learn how to play sheet music. "I didn't understand music in their systematic way, but today, I don't approach music with rules set to it anyway," he remembered. "I'm glad I learned it for myself."

Gardin's interest in hip-hop rekindled after seeing Eminem's film 8 Mile and, while still in high school, he began rapping with some friends. He told Cross Rhythms, "I think we were influenced by what was on the radio, so we would rap about beating people up and taking their girlfriends, which isn't the best content. As I grew more in my faith, though, I realised I couldn't talk about that stuff, and I started realising everything I was talking about weren't things I was actually living. 'Why am I talking about that? I don't even know anything about this. Maybe I should actually talk about things I know about.' My original rap name was P.H.I.L.T.H.Y. - with a 'ph'. That was 17 year old James' idea! I wrote down rap names and I was like, 'That one looks good on paper!'"

He commented, "I made some recordings as P.H.I.L.T.H.Y. in 2003. But I have since destroyed all copies. I don't want anybody to hear those at all." In 2014 he released his first project, an EP, as James Gardin, 'Moleskins And Pocketsquares'. He commented, "As I grew as an artist, I started realising I can make an impact with art. So my goal became to reach more people so that I can just help encourage them and educate them on different things. It grew with a little more purpose than just wanting fame. That was a process within itself."

His 2015 mini-album 'Living Daylights' produced a Cross Rhythms radio hit with "Freedom (ftg Sareem Poems & Redpill)". In 2017 he released three singles and in 2018 six singles and an EP 'Until It All Makes Sense', which eventually grew into a full-length album.

The video for one of his singles, "Joy", has received a lot of views and praise, with children of all shapes, sizes and abilities dancing along with the rapper. Explained James, "Most of those kids are from where I live - Lancing, Michigan. They're part of a dance company. I can't think of the name right now, but they heard the song and they made up a dance to it. So we're like, 'Let's just go in a park, have them do a dance, and then just have a Soul Train line and show people having a really good time.' I love the way it turned out. That video's very joyful." 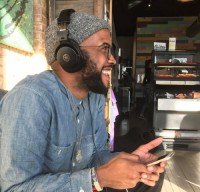 He continued, "I look at what I've learned lately about myself, what new things I need to work on. I feel like 'Joy' was raised when I was allowing certain circumstances to control how I felt. Joy doesn't need to be dictated by that. Songs like 'Complaining' - I think I was complaining a lot, and it was like, 'Are you going to look for a solution or just spend three hours complaining, James?' So a lot of my content comes from either what I end up journaling, what I learn at church, or what I figure out I need to work on as I grow. My experience isn't like something no one else has gone through. Everyone is living the same existence in a sense. If I know that I'm struggling with it I'm like, 'There's at least three other people struggling with it, so it's worth a song. Let's write about it.'"

Cross Rhythms asked this exceptionally good rapper whether he felt frustrated on seeing lesser hip-hop talents on TV, knowing that they've sold half a million records. Said James, "My perspective may be different to most rappers. This is me being hard on myself. I don't engage as much on social media - or any media - as much as they do. So, if I compare myself to them, I think the reason they are surpassing me is that they are louder with their message. My message and the way I do it is very proficient and high quality. I could just be louder with it. So if I was louder talking about 'Joy' in every avenue, I think then there would be no choice but for it to be huge. I'm looking at how to do that more, because if I listen to the radio and hear a bunch of music that's not of the highest quality - it's mind-numbing - I know I need to be louder in giving a message that combats that. That's me maybe getting out of my comfort-zone and starting more conversations. I live in a way that what I truly feel is there's no person that's stopping me from my success. If there is, it's probably just me. I try my best not to get upset with what other rappers are doing, because they can't control what God has for me, or the impact that this'll have in the long run."

But can the rapper pay his bills from his music-making? "Not fully from my sales, but also, luckily, I've been able to do a lot of teaching. I work with non-profits in schools around the area, and I teach song-writing and production. With that, I'm still able to do some music."

James is still very busy creating. He said, "I have a couple of singles I'm planning on dropping throughout the summer, maybe a couple of EPs. I've just released a full-length album called 'Sweet Jesus'. I also do a little bit of singing. I took vocal lessons a couple of years back and it helped a lot. I feel like now I need to do it again. Sometimes, as a writer, I have ideas that aren't really rap. I just think I need to train my voice to be able to fully execute them."

A future release which James is particularly excited about is a song called "Comfortable". "'Comfortable' is kind of like the idea of being okay with who you are, being comfortable in your own skin. It has a very danceable, funk vibe. 'Comfortable in my own skin/I like who I am.' I wanted to have a record like that because we should celebrate ourselves, and if it drops in summer it works with everyone preparing for the summer, and they like to have their beach bodies, so I want to be like, 'Hey! The body you're in is all right, so you don't need to switch anything up. Just be comfortable in it.' I'm hoping people are inspired by that. There's going to be a featured guest on it, so I'm waiting on that."

I finish our conversation by asking whether "Comfortable" will have a video. "Yeah, maybe we should have a video. You're giving me ideas now! That does make sense."