Janis: Through His eyes

Scottish singer/songwriter Janis is bringing a country music tinge into the field of worship. She spoke to Mary Brows. 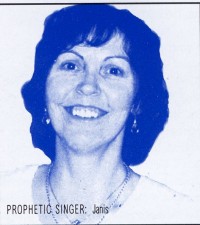 New name has appeared on the CCM scene. Janis English from the Wirral is released her second independent album, 'Eyes Of A Child' in June. A down-to-earth Scot, Janis sang in choirs when she was younger but has no musical background. She was led when in 1991 she realised that God was calling her to lead worship. "I woke up in the night with palpitations, sweats, everything, and thought that there is no way that I could lead worship. Suddenly I heard this voice: 'If I could use a donkey, I could use an ass like you.' I laughed as I realised that God has a great sense of humour. In my strength I couldn't do anything, but with him at the helm anything is possible."

Janis got involved in worship, then two years later began to receive prophetically songs, following a time of personal trauma (her mother and brother had died within two months of each other). Janis was working on a hospital switchboard when words and tunes began to run through her mind. A few weeks before, feeling that God had something more for her to do, she had asked her architect husband Eddie to buy her a guitar. Although unable to read or write music (or play the guitar!), she jotted down the words as God gave them.

The songs would come at different times of the day and night. My family was quite longsuffering, although my daughter would knock on the wall when I played the guitar in the night. Since then the Lord has opened the way to share in testimony and song in Scotland, England and America," Janis explains. "It's amazing what the Lord can do if we allow him to take over our lives. Naturally I make mistakes, but I have a Father who is forgiving and loving. All I want to do is to lift up the name of Jesus." Having given up her hospital job, Janis now receives invitations to concerts, churches, outreach meetings, etc. Eddie plays keyboards and preaches when required.

In 1996 Janis met American country and western singer Jerry Arhelger at a Birkenhead concert; subsequently he invited her and Eddie to America to minister in several States. She comments: "Our 16-year-old son John enjoyed his visit to the States. He met some lovely young people - he said that he'd never been to so many prayer meetings; there seemed to be one every night, followed of course by a good meal!" Janis and Eddie are returning to Nashville in October to record another praise and worship album.

The opinions expressed in this article are not necessarily those held by Cross Rhythms. Any expressed views were accurate at the time of publishing but may or may not reflect the views of the individuals concerned at a later date.
About Mary Brows
Mary Brows is a mother and journalist from Thames Ditton.

For more on Janis visit the Janis artist profile