Jars Of Clay: CCM veterans finding the shelter of community 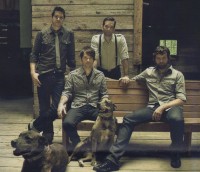 Nashville-based Jars Of Clay made a triumphant return to the Greenbelt Festival this year. In a crowded press conference I and other journos quizzed Dan Haseltine (vocals), Steven Mason (lead guitar), Matt Odmark (rhythm guitar) and Charlie Lowell (keyboards) about their long career. I started off by reading them the introduction of an article Cross Rhythms published about the band in 2006 which summarised their musical journey up until that time. "During the years, Jars Of Clay have demonstrated quixotic changes of musical approach while continuing to hold on to a huge support base amongst American Christians, in 1995 they were dubbed alterna-folk for their 'Jars Of Clay' breakthrough album, by 1999 'If I Left The Zoo' was offering everything from 'Sgt Pepper' retro to hard alternative rock, and in 2003, there was bluegrass and country sounds on 'Who We Are Instead'. But it's the release of this year's 'Good Monsters' that has finally brought the band's stylistic eclecticism into sharp creative and commercial focus."

Dan Haseltine was gracious in his response to the summary. "I think that's pretty accurate. Even when we were working on the 'Good Monsters' record we felt more of a synergy, more of a connectedness than I think we had on the other records. The 'Jars Of Clay' record we produced ourselves apart from a couple songs we did with Adrian Belew. But then after that, when record labels got involved, with all the voices speaking into the process, I think that it stripped away some of our confidence in being able to make music on our own because all of a sudden everyone had an opinion about what we should do. It took us a few years after working for a few different producers to jump back in the studio and start recording on our own and get ourselves back into a really good focused, creative space. Most of us look back on 'Good Monsters' and say, "Okay, we feel like we really found our footing again on that record."

Was having their own recording studio an essential part in finding their footing? Responded Dan, "Yeah, I think 'The Eleventh Hour' record was probably the one where we spent the most time just trying to be creative; we would do a song a day and get a sense of it. We'd give ourselves a challenge like, "Ok, we have to try and incorporate these kinds of elements into the music." Having our own studio allowed us a year to do that, otherwise we'd be living in trailers, we'd be broke. Certainly having our own studio space gave us the freedom to create and chase some wild hares."

Over the years the band have recorded 12 studio albums and played many hundreds of gigs. How do they maintain their creative zeal? Responded Dan, "I think as a band you kind of go through seasons of exploration where you're sort of trying out new ideas, you're trying out new outfits, you're doing something which is stretching what you understand to be the core of who you are into a new direction and what that yields. And then there are seasons where you collapse back into what you know. In order to be a band and still be vibrant you have to constantly be moving in and out of that orbit, otherwise you are too far off the deep end all the time or you are to stuck in a rut. So that's been a part of keeping us interested."

In October Essential Records (Integrity-Provident in the UK) will be releasing 'Jars Of Clay Presents The Shelter', a concept album that dwells on the idea of community, both physical and spiritual, and features a myriad of both songwriting and vocal guests including Brandon Heath, David Crowder, Mac Powell, Burlap To Cashmere, Derek Webb, Gungor, Sara Groves, Leigh Nash, Amy Grant and others. This is a unique approach for the band. Said Matt Odmark, "Jars Of Clay, historically, has been this kind of compact creative environment; we're known for doing everything from the songwriting to the producing to the artwork. This was a push in a totally different direction. We brought people in on the songwriting side of things and we knew in the beginning that we wanted as many voices as possible in the record. We wanted to make a record about community and we wanted the recording process to be community. We wanted it to be an expression of what it was trying to articulate from a concept standpoint. It wasn't going to work any other way, and it didn't make sense to us to write a record about community that was just us talking to one another."

Steven Mason continued, "One of the things we're excited about with this record is to offer, with humility, what we're excited about within the Church. We're all big fans of the Church, we attend church, so part of the passion we want to get to the people is that, hopefully, this is the language we can use to rejuvenate the way we speak about God in terms of each other. What has been, graciously, changing us is this idea that when we look around we see God in other people and in what they're doing. We are the hands and feet. We're trying to find new language to describe stuff that we're all probably in some regards cynical or bored about, because we want to believe there is life in those places."

Said Dan, "One of the resident poets of Greenbelt shared these old Irish words, 'It is in the shelter of each other that people live'. 'Good Monsters' was a good place to pick up our story from because for the first time we were figuring out our relationships in terms of our own self-awareness and how that informed and how we related to each other and the agreements that we made on how to make life work, transitioning into 'The Long Fall Back To Earth'. That album is purely about moving from that self-awareness into how is this going to affect other people, those I love and those I find it hard to love, to the shelter. How do we do this authentically, how do we do it in a church, how do we do it in the world we live in? That brings up the scary idea of submitting ourselves and our story to someone else, the glory in such an abandonment, really what I think we are discovering what faith looks like in terms of finding our true selves."

I suggested that in community we are stronger than lots of individual egos. Dan agreed. "That's the point and I think to bring that to the Church specifically and say, "Well, what are the implications for the Church when we talk about the shelter?" We can talk about the four us travelling together and living together and being a shelter, but when we open it up and say, There are people that think a lot differently than you could and should be your shelter, and all of a sudden it gets a little hairy.

That idea of being "hands and feet," actively working for the various communities it impacts, has long been a priority for Jars Of Clay. It's a notion that extends into the charitable realm through its foundation Blood:Water Mission, which was the beneficiary of a day-long Jars-hosted radio-thon via K-LOVE and Air 1, an effort which raised more than $800,000 for the group's work.

In the press conference journalist George Luke quoted the group's lyric "Love is a protest, I'm surrounded by people who don't think as I do." He said, "I know you are a bunch of very social action conscious guys, but to us, America's Church does seem to be very conservative. Do you still think that you are surrounded by people who don't think like you do?" Answered Dan, "Yeah, I think that the tension of being part of the Christian community is that we will always be surrounded by people who don't think like we do. But it is part of what allows us to stay engaged. If everybody felt the same way, we'd all get bored, we'd all end up flattening each other to death. I think the fact that there are people who offer a great deal of resistance is what keeps us moving forward. I love great stories, and I think what makes great stories is that there is always tension. When a story loses its tension or loses its mystery then it ceases to be interesting and there is no reason to keep continuing with it. I feel that that is sort of true of the way we approach music and social activism. I think we are always a bit more comfortable when there is a good bit of tension between what we are saying or the way we're communicating and what other people think."