Down the years more than one Southern gospel singer has used the genre as a launch pad to wider CCM success. However, if the career trajectory of Jason Crabb continues at its present upwards momentum it's likely that the Kentucky-born singer will outshine the achievements of the Imperials, Dallas Holm, Russ Taff, etc. In fact, it could be argued that Jason has already achieved that. His self-titled debut album released in June 2009 made number two on Billboard's Christian album chart, number 62 on the mainstream album best sellers and saw the singer named as Male Vocalist Of The Year at the annual Dove Awards. Jason's new album, 'Love Is Stronger', will surely become an even bigger success. What takes 'Love Is Stronger' to the heights is the production work from some of the finest studio talents, namely Jay DeMarcus (member of country supergroup Rascal Flatts), Ed Cash (Chris Tomlin, Kari Jobe) and Wayne Haun (Celine Dion, Earl Scruggs). The songs, too, emanate from many of CCM's best known songsmiths including Ronnie Freeman, Tony Wood, Sarah Hart, Marc Byrd, Jimmy Yeary, Sonya Isaacs Yeary, Connie Harrington, Mia Fieldes, Seth Mosley, Michael A Mobley, Geron Davis and Barry Weeks.

Speaking about the production of 'Love Is Stronger' Jason said, "I wanted to be hands off this time. I'm usually involved directly or indirectly in the process, but this time I wanted to let people whom I respect guide me. The label and I discussed the song choices, of course, as well as what I wanted to say; but overall, I said, 'I'm going to let you take the reins.' I told all three of the producers, 'I want to walk out of here feeling like I've run not just a half-marathon, but the whole thing.' I wanted to be put to the test - to go to the mat, so to speak. And they pushed me! Whether it was 'backing off' on some things or 'giving more' on others, they pushed me." The result from this 17-time GMA Dove Award winner is a body of work that finds Jason's blue-eyed soul voice encased in sonically satisfying state-of-the-art production.

Said Ed Cash, "Working with Jason was just an absolute true joy. He's one of my favourite people I've ever met. He's such a genuine guy and so real and sincere; and that's rare to find, particularly for someone who's had such great success. I was absolutely blown away by how Jason was so vocally flexible. . .not only was he technically able to stretch vocally, but I feel like the sincerity in his voice was absolutely maintained, and I think that's just a testament to his character. Whatever he's singing - whatever is coming out of his mouth - it's believable because he's believable."
Jason spoke to breathecast.com about how his music has developed down the years. "I think, as a person you're trying to stay the same but give a new sound. It still has some of the rootsy things that we do. But also, I wanted to reach out to the kids - my kids! I have a seven and nine year old, and I want them to want to listen to the songs. It's a tough task; it'll drive an artist crazy. You don't know what colours to use, you don't know what paints people will be attracted to. Thank God that wasn't on my shoulders; that was more of the producers. But they did a good job."

Jason was born on 3rd March 1977 in Beaver Dam, Kentucky. The family patriarch Gerald Crabb had by the mid-'90s assembled The Crabb Family - Jason, Adam, Aaron, Terah and Kelly - to become one of the most popular acts in Southern gospel who went on to have 16 number one Christian radio hits playing everything from the Grand Ole Opry to contemporary Christian music festivals. In 2007 The Crabb Family came off the road. In 2009 Jason released his solo debut for the Spring Hill Music Group. Shortly before the album's release Jason spoke to journalist Andy Argyrakis about leaving The Crabb Family. "It was just time. The season was finished, and there were new leaves to be turned. When my parents came off the road, I felt like that really clipped the strings off my wings. It felt like God telling me it was time [to go solo]; and it was tough, but we just knew it was the right time." 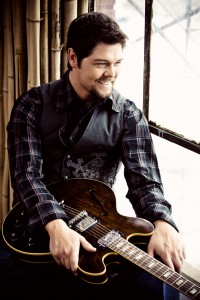 As well as the country music leanings evident on 'Jason Crabb', particularly on songs penned by his father, there was also a pop and R&B edge brought in by A-list producer Tommy Sims. Said Jason, "I think it was neat for Tommy because it gave him a break from the pop thing, and he really helped give the project an edge. Plus, it was amazing to see all the [memorabilia] hanging on his wall. And Norro's just an awesome guy who loves to hear somebody singing from the heart. He also introduced me to Neil Thrasher, who's written tons of songs for everyone from Rascal Flatts to Montgomery Gentry. Vince Gill also came and sang on the record, which was so cool. He's a talent, and he's a giver who just loves good music."

Now with 'Love Is Stronger' there is an even more diverse set of styles and musical approaches. "What The Blood Is For" was produced by Wayne Haun and features a 40-piece orchestra. Said Haun, "What I've always loved about Jason's vocal performance is the passion you hear and feel from the first note of each song. You have no doubt that he really believes what he's singing. You can't miss that powerful interpretation with this song."

'Love Is Stronger''s title track is a favourite of Crabb because of his own family's difficult journey over the past two years with his wife Shellye suffering from severe health issues. Admitted the singer, "This was a hard road for us. There were days she couldn't get out of bed, and I watched her struggle as she was having trouble being the wonderful mother that she is. It was difficult and heartbreaking. But then I watched her fight back. I watched what happens when Love Is Stronger. I watched God move and her persevere. When I heard the lyric to 'Love Is Stronger,' I knew immediately this song was for us. It was like the writer knew our story."

The final word about Jason's new album goes to producer Jay DeMarcus, "As a producer, I've been fortunate to have had the opportunity to work with some of the best singers ever; I would certainly put Jason on that list! It is such a joy to work with someone that is so talented and driven. We've had a blast working together, and I think he has stretched himself creatively to the point to where he even surprised himself. I cannot wait for people to hear this record!"