John Gibson: Talking to the worship leader and writer of "Jesus We Celebrate Your Victory"

The release of his album 'Neighbours To Nations' recently was a culmination of years of far-from-glamorous toil for worship songwriter and leader JOHN GIBSON. Tim Walker spoke to the composer of such songs as "Jesus We Celebrate Your Victory". 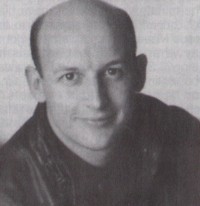 John Gibson presents us with a paradox amongst worship leaders -his is perhaps not yet a name which trips off the tongue as readily as Kendrick or Bowater, but he has written a couple of what some would call the worship standards of the last few years. As an actual worship leader, John would probably be a familiar name to some Spring Harvest goers (he led meetings at Ayr this year), but most readers of this will know at least one or two of his songs; "Jesus We Celebrate Your Victory" or "You're Worthy" will be the most likely ones to raise an "ah yes" from the great CR congregation out there. With the release of his first album 'Neighbours To Nations' through Nelson Word, a further eight of his compositions will hopefully soon be as established in the worship song canon as these two are.

When I got round to having a chat with John at his home in Swindon, where he lives with wife Nicky and children Josh and Natasha, I asked what it is like to see his songs being used by other Christians in worship at events such as Spring Harvest. "Well, I feel very excited that people are using something I've written to express their worship and praise," said John.

John was born in Golders Green, London, and lived there until the age of nine when he moved to Bristol, where his father worked for Scripture Union. John remained there until he moved to Swindon with Nicky in 1988, where he is now a full-time leader of Swindon Christian Fellowship. Enquiring about his musical background, I received a quite complex picture which started in his school days. "I don't really remember very much musically until I was about 12 or 13," began John. "At junior school I did the normal recorder lessons, violin lessons, but never really got anywhere with them! At secondary school I continued with the odd musical thing; I played the trumpet for a bit. I'm not that big now, but then I was quite small! Humping this great big tuba around was just totally impractical!"

But this wasn't the end of his musical path. After being dissuaded from the saxophone by his music teacher, John took up drums and orchestral percussion, but there was more to come, as he explained. "It was around that time that my brother started to learn how to play the guitar, and every time he came home from his guitar lessons he'd teach me the three chords he'd learned." John here adopted a wry smile. "I very quickly found that I was better at it than him, so I kept going and he gave it up fairly soon afterwards...."

The conversation then turned to his first step proper into recording, 'No Casual Labour', which he and some friends from Bristol taped in 1985 under the moniker Voices. Clearly amused at me bringing it up, John nevertheless remembered the project well. "That was an album we made as a cheap budget, home-brew job. It was really a guy called Dave Anderson, who at the time was a keyboard player in Bristol and we were basically playing together. We found that we were writing some stuff that wasn't worship, and therefore what could we do with it? It started out, I suppose, as a musical scrapbook, and blossomed from there..." 'No Casual Labour' featured, amongst other musicians, one-time Heartbeat bassist Pete Moore, and Clive Davenport chipped in as co-producer. 500 copies were made of the album, and to date almost all of them have been sold, although John suspects he might just have a couple left! For the following few minutes John provided a good few laughs by pointing out the group's inexperience in the studio (for instance, hiring a drum machine and spending half the time trying to figure out how to program it...).

A couple of years later John wrote what is still his best-known worship song, "Jesus We Celebrate". How was he inspired to do this? "Nothing particularly inspired me," John admitted. "I've always had a policy, a practice, of spending time worshipping God with my guitar. One day I was singing this spontaneous song, and I just got hooked into the "Jesus We Celebrate" riff - it developed from there." I commented how it does seem important for worship leaders to spend time before God in this way, and John agreed. "Yeah, I think there is a sort of integrity thing. I think, too, it's not always that easy to (lead) worship in a public setting because you are thinking about so many other things - what you're playing, the congregation, the band, the other leaders, what God's saying in it all... all those sort of things. It's not always that easy to feel relaxed, so the more I use a song in my own personal worship, when I take it into a meeting, the more comfortable I feel with it and am able to use it freely."

When John has a fresh song to try out on a congregation, Swindon Christian Fellowship is usually pleased to act as guinea pig/midwife to the new arrival. He said this can be particularly useful when judging how accessible it is to a group with differing musical and vocal abilities: "When you write something specifically for other people to sing, you never know whether what you're singing is easy or not! So I do try and test the songs out and then see what works or what doesn't."

Many people, according to John, have encouraged and helped him in his ministry. He cites Nick and Jenny Harding, a couple formerly from Bristol who now lead a church in Liverpool, as having encouraged him "from the word go"; others include fellow worship leader Ian Traynar, whom John says helped him greatly when he was starting to lead worship, and Ray Goudie of New Generation Ministries, who introduced John to the maze of the CCM business and instigated the project which became John's first P&W album, 'Neighbours To Nations'.

Before long, ex-Heartbeat keyboard player and old acquaintance Dave Bankhead became involved, and the expertise and contacts of Ray and Dave in their fields (Ray in the industry and Dave in production and performance) were to prove invaluable as the project gathered momentum. With Ray as executive producer, the. production as well as all the keyboard and programming duties on the recording were handled by Dave. Guest vocalists include Nannette Welmans, Chris Eaton and new NGM artist Eils (another singer to watch out for), whereas the instrumentalists count 65dBA members Danny Budd (electric guitar) and Stu Robson (bass) amongst their ranks, the latter contributing one of his famous raps to "Jesus We Cry Jesus".

On its release the album was very well received by critics, the reviewer in CR14 referring to it as "one of the outstanding praise releases this year". The overall feel of the album has been described as "almost party like", and indeed many of John's songs give Ishmael's a fair run in the liveliness stakes. Was this a deliberate move? "Well, I think partly it's my own experience of God," said John, "and you can't really write outside of your own experience with any degree of integrity. I'm so convinced of the fact that the Church in this country needs to break out of its cultural inhibitions and not be forced into this "stiff-upper-lip" mould when it comes to God. My understanding of heaven is that it's going to be one heck of a loud place, full of people singing and shouting, praising and rejoicing!" I should stress that John did state the importance of more musically "laid-back" writers such as Chris Bowater, "writing excellent worship songs", and indeed John is capable of more contemplative writing ("Perfect Love Of God"), but feels there is a dearth of more up-tempo, celebratory material in the canon. Furthermore, he tends to explore certain themes in his writing such as the marriage of the Bride and the Lamb and the Second Coming, "which for me is dead exciting! So it's difficult for me to write slow songs about those things."

What of John's musical tastes? Upon enquiry, I found that regular occupants of the Gibson hi-fi include other worship albums ("I find them very uplifting") cheek-by-jowl with people like Billy Joel, Chris Rea and Simply Red, although he confesses to being "not very up-to-date" with his tastes! On the subject of ambitions, John would like to continue leading and teaching worship further afield, and to this effect has recently made a trip to Zambia.

Finally, what's it like having a similar name to a certain US white rap/soul artist? Letting the mirth die down a bit first, he replied with his usual dry humour. "I rang up a not-to-be-named record company recently, and when I told them the department I wanted they asked who I was. I said 'John Gibson', and they said, 'Not THE Jo(h)n Gibson?!' So it depends which way you look at that..."