John Waller: The US singer/songwriter talks about coffee. . . and music 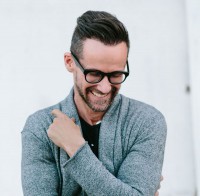 Long-in-the-tooth Cross Rhythms followers may remember John Waller when he and his band According To John visited Devon to play the Cross Rhythms Festival though far more will have noted the gifted singer/songwriter for his haunting song "While I'm Waiting" from the big Christian movie Fireproof. Now he's back with a much watched video to his song "Awakening" (aka The Coffee Song). I spoke to the Georgia-based musician about his music, his video, his huge family and his unexpected move into the coffee business.

Tony: Let me start by talking about this wonderful video you've made. Why did you decide to film it in New York? Wouldn't Georgia have been a better place?

John: Well, New York City is a lot more fun than Atlanta, Georgia. My wife and I love New York City, all the diversity of culture, and we knew if we filmed it there we could get a lot of people from many different walks of life to be part of the video. It was a lot of fun.

Tony: How did you persuade the fire station to allow you to put on a fireman's suit?

John: We would not have been able to do that except that we had an inside contact. The director of the video, his name is Bill Sammons and he also manages a Christian radio station in Delaware. His wife's brother-in-law is a fire chief and in fact he's the one in the video coming down the pole. He was able to get us in there. The New York fire department is this iconic symbol of service in America, so it was fun to have them in there.

Tony: Was "Awakening" one of the first songs you've written with Ian or have you been writing with Ian for a long time?

John: I had probably recorded five songs with Ian when we decided to write a song about coffee. The main reason that we wrote the song was because my wife and I had started a coffee brand called Crazy Faith Coffee and it was something we just decided to do to try and help feed our nine children (we'll talk more about that in a minute). We started Crazy Faith Coffee sharing stories of faith and people stepping out in faith for different reasons and God doing amazing things. We put these stories inside bags of coffee beans and so it's a kind of evangelistic ministry-type tool; to give somebody a bag of coffee with a story inside. Ian was like, 'You need a coffee song to go with your coffee company', and I was like, 'Yeah, you're right' so we wrote that song one day. When we were finished, we were like, 'This is a great song, we need to record this pretty quick'. So, we did and people responded immediately to it so I knew I had to do a video to try and capture the essence and the fun of that song - the song is a lot of fun, a lot of joy. I pictured people dancing in New York City, so that's why we did that.

Tony: Coffee is a bit of a controversial subject these days because there's been revelation that some of the coffee beans being distributed and marketed, the people who grow them aren't getting much in the way of financial reward. Have you made sure that your coffee beans are ethically grown?

John: That's a good question. When I first got into this, I didn't know much about sourcing coffee beans, so someone introduced me to a local guy who was in the process of moving to Honduras to help coffee farmers and to plant churches down in Honduras. I met with him and he told me that he was importing coffee beans from Honduras and he was buying directly from farmers and paying them above Fairtrade wages for the coffee beans. I was like, 'Well that's great, tell me more' and I tried the coffee and it was excellent so I started to buy coffee from him. He has since moved down to Honduras. Therefore, I can tell you emphatically that our coffee is responsibly grown and sourced; it's Fairtrade and organic and we know that our coffee farmers are not only getting fair trade but they're getting above Fairtrade price.

Tony: As this interview is turning out to be a massive plug for your coffee concern, can people in Britain buy your beans through a website?

John: Yes, the website is crazyfaith.coffee and they can also go on there and share their story, if they have a crazy story where they've stepped out in faith. Ours was an adoption story which we can talk about in a minute but lots of people have heard the call of God in their lives and stepped out and seen God do amazing things. We want to hear those stories because we're looking for those kinds of stories to put inside our coffee bags and to feature on our website and on social media.

Tony: Let's talk about this amazing family you've got. Even before you started adopting children, your wife brought you a few directly, didn't she?

John: We had five biological children. It was almost five years ago when my wife felt we were supposed to adopt a little girl and I'd always wanted to adopt, so I was on board and excited. We pursued adoption, we prayed about it and we fasted, and then I had a dream about a 10-year-old girl from Eastern Europe and in the dream, I knew her name was Ana and she was 10 years old. Two days later we found her - she was up for adoption and was from Ukraine. We pursued adopting her and then we found out she had a brother who was 14 and he was also in the same orphanage and needed to be adopted also. We ended up pursuing adopting both of them, and about a month before we were going to go and get them, we found out that they had another sister who was in a separate orphanage. They didn't really know each other because they'd been separated for seven years. [To cut a] long story short, we ended up adopting her also, bringing them back together. We then found out we were expecting another biological baby the day before we went to Ukraine, so we went from five to nine in one year. That was kind of our crazy faith story that started this whole thing.

Tony: Do you have a very large house?