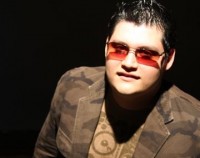 The release of the pop rock album 'Here I Go' by Johnny Juarez is the latest step forward for a singer who has played concerts in Mexico, Puerto Rico and Honduras and released three critically acclaimed Spanish language albums, 'Elementos' and 'Navidad Latina' in 2003 and 'Tu Presencia Mi Paz' in 2005. Born in Houston, Texas, Johnny spent most of his life living in Toronto, Canada. Today he lives in Buffalo, New York and having opened for acts like Jars Of Clay and Bryan Duncan, has now released his first English language project, 'Here I Go'. Produced by Sean Spicer and Henry Gonzalez, the album was recently described by one critic as a cross between Casting Crowns and Big Daddy Weave. Johnny was recently interviewed by American journalist Mark Weber.

Mark: You've already sung for Spanish language audiences all over the world, so why are you now interested in an English language career?

Johnny: Growing up in Toronto, Canada, God allowed me to be part of a multi-cultural community. I believe that God is allowing me to be able to be part of a new generation that is global. Singing in Spanish the past few years has been a blast because it is my roots and I have been able to travel a lot throughout the urban cities in the USA, Canada, Latin America and Spain. However the global language is English and I believe that I have been called to the nations. I have seen a great response with this as I am able to connect and share with Spanish language or English language audiences, and the fusion of both as well. My music now is played on radio stations from coast to coast and even places like South Africa. I think that it would be selfish of me to limit my message and music just to one particular group of people as the great commission tells us it's about taking it to the whole world.

Mark: You've had some tough times in your life. Tell me about them.

Johnny: My wife and I fell in love and got married in our late teens. We both were crazy for Jesus and for each other. We had made plans, what we were going to major in, what type of house we wanted, what city and how many kids we were going to have. Everything was planned, but little did I know that a detour was about to begin. You see, Vanessa came to Canada back in the '80s when several civil wars had torn many countries in Central America. Her family emigrated to Canada with a tourist visa and decided to stay, work and raise their kids there. The thing was, though, because they had little command of the English language, and limited resources, they filed for their Canadian immigration papers and their case was rejected. They appealed several times, but every time was a negative response.

My wife Vanessa spent most of her pre-teen and teen years growing up in Canada and then we got married. As we were trying to sort out how to get her status adjusted, by me sponsoring her, they broke the news to us that she was to be deported immediately and sent back to Central America. It was very sad to see her being taken away from me, especially knowing that she had no immediate family back home and she had not been there since she was 10. I decided to go with her and apply for the papers outside of Canada, thinking that in a month's time she would be back in Canada with me. That one month turned into eight months, only to receive the bad news that our application had been rejected. We applied for our American papers, and those got to us in six months. We moved to the USA. As we lived there, we realised how much we missed our families, our church and the ministry I was involved with musically. We came back to Canada and decided to apply once again, thinking that by having American papers it would expedite things, and also that my wife had just given birth to our first child Janessa. After about a year and a half, we got another notice saying no. She was to leave immediately and go back to Central America.

Emotions of anger, sadness and frustration hit me. It was like we would keep on running against a huge wall. So we go back to Central America, and while we are there God starts giving me new songs. We decide to give it one last shot. However this time I was advised to stay in Canada working and she and my daughter had to stay in Central America. We did this and months passed, then a year, then more months, and I start to crack. I never imagined that this moment would last so long, but this is the best part, because God begins to pour on me a new anointing in my songwriting. It was in this moment that I began to write with tears in my eyes the song "You Are There" with the lyrics in the chorus saying, "You are almost there. you are nothing but a step away/And how there is no mountain too high that I can't climb." Then I felt led to read the story of Elijah in the desert and how God's angel instructs him to go to the mountain. So I too climbed that mountain. I remember that day I got the call from Vanessa as I was going to sing in Toronto. "Baby, we got the papers." I had to pull over my car and just thank the Lord.

This "moment" took six long years. I realised that it was only an excuse for the greater purpose God had for me. It was because of this hardship that I matured more in my walk with Jesus. Soon after my family reunited and I am led by the Spirit to take a leap of faith and go into music ministry full time. With my family by my side I have sung in many countries, in Latin and North America, even Spain. Sometimes these moments of hardship can be long, but it only means that the blessing is greater. I have come to realise that as the Bible says we go from one glory to the next, in the end it all works out for God's people. 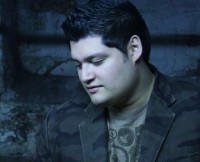 Mark: Tell me about the song "Here I Go".

Johnny: "Here I Go" was written on a plane going down to Central America. I was so nervous and started to doubt myself, as I was going to sing on TBN Enlace for their 12 day telethon on live television broadcast to about 56 countries. The song is about walking in faith, about being more than a conqueror in Christ. I have always seen myself as a trailblazer, making new paths, breaking the ice whether it be socially, culturally and/or spiritually. We might face obstacles, giants or mountains along the way to our destiny, but they should not be seen as drawbacks - instead they are platforms to discover the greatness of God's love. When you walk in the name of the Almighty you will break the hurdles down before they can break you.

Mark: Tell me about the concept of "Faithword" you often use.

Johnny: "Faithword" simply means that the message, lyrics and content of my songs are uplifiting, motivational and inspire people to see beyond their current situation because God gives us his Word that we have his protection, direction, and support to accomplish any dream in his name. The songs encourage listeners to unlock the thousands of promises God has for us in his Word and that everything that happens in our lives is just a small piece of a great big puzzle, which represents our individual purpose in this world.

Mark: What's something you struggle with that God helps you through?

Johnny: I think one of the biggest struggles I have is that I find myself wanting to do so much and expecting it to get done in a certain timeframe. I have learned that the greatest things in life take time and that patience is key to long term success. For some reason this year I have the desire to go fishing. It is so weird because I have never cared for it before. The only time I fished was when I was about five years old, and it was in some pond in Toronto (not the best fish). In sharing this with a pastor, he told me that fishing is a sport for patient people. Sometimes you get fish and other times it's just not going to happen. I felt at that moment that maybe this is the reason I feel I must do it. Even though I have gone through so many times in my life where I have had to be patient, I think God wants me to rest in him even more. I will fish this summer and I know I will learn something new.