Jon Gibson: The US soul singer back after a three year break

After a three-year absence, Christendom's premier soul singer JON GIBSON is back with a magnificent new album. He spoke to Jan Willem Vink. 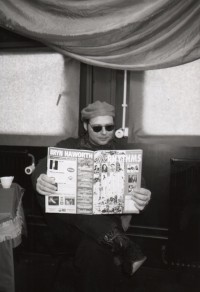 Jon Gibson is for many the finest soul singer in Christendom. A monumental talent whose classic albums' Change Of Heart' (1988), 'Body And Soul1 (1989), 'Jesus Loves Ya' (1990) and 'Forever Friends' (1992) produced some of the most memorable grooves ever to shake the stereotyped enclaves of US Christian radio. His sinuous soul voice and intuitive way with words and music brought the singer to the attention of artists like Stevie Wonder and MC Hammer who guested on his records. Then, in 1992 with 'Forever Friends' high on the US Christian charts, Jon withdrew from earshot. He has returned with a new album 'Love Education' that critics are already acclaiming as his finest), his own record company (New Soul Records) and a new wife with a baby on the way.

Born in San Francisco, Jon grew up in San Jose only to make his way back to the city by the bay when he was a teenager. The streets of San Francisco became home for Gibson and after several encounters with the law and time in juvenile hall he joined the military. During this time he discovered a natural ability to write songs. Because of severe allergies Gibson was given a honourable medical discharge from the army after only 11 months. Upon returning home the 19-year-old discovered his father had become a Christian. The dramatic change in his father's life influenced Gibson's decision to follow Jesus Christ. Singing in clubs in California led to Jon being signed to a mainstream record company, Solar/Constellation Records. However, the release 'Standing On The One', despite an enthusiastic review in CCM magazine, was a commercial disaster. Remembers Jon this period, "I really wasn't happy, I went through four years with a manager, which was really painful experience. He kept me oppressed in the sense that he wanted me to go secular and I didn't want to. More and more I wanted to sing for the Lord. It was a war from the beginning and it was miserable and it was like a divorce, bitter and miserable.

"Then I quickly signed with Frontline and it was as miserable as that relationship. At least my ex-manager did not claim to be a Christian, so it was a little less painful. But I realise that when it was over, in spite of that, God was able to use me and able to bless many, many people through that whole experience. And it made me look at God and stand in awe of God, how great he really is and what he can do and accomplish in a situation like that.

"But the reason why I didn't want to make any moves was I felt that I jumped before God. Even though God was able to use my mistakes for the glory of God, I still felt I made some mistakes, because I was impatient and jumped and moved before I felt it was God."

There were several elements that frustrated the relationship between Jon Gibson and Frontline. The main issue was the fact that through the years Jon got no payment for his recordings!

"I was very unhappy the whole time and hurting because they weren't paying me anything. I wasn't making any money to survive with. I had to survive on my own. When I got into the problems, there were some people, and I don't want to mention their names, on staff at Frontline who really wanted to make my life miserable. And they achieved that.

"My contract was over when I completed 'Forever Friends'," says Jon. "I felt comfortable about 'Forever Friends' because I knew that the record wasn't exactly what I wanted it to be, but I knew that I liked it anyway. I didn't love it, but I liked it and I knew that others liked it and it would do its purpose, which is lift people up and touch people. I knew that it sounded good enough and better than past records so really I felt good about it. But at the same time I knew I could do better. But I was definitely free from Frontline."

While waiting for God's direction, Jon was tempted by several record companies with lucrative offers. One even offered to wire $100,000 to his bank account. In the end Jon went to Joey Taylor and Gene Eugene of Brainstorm, a company known for its high quality albums in the alternative rock and rap territory. Not an option that would first come to mind. "I waited for three years. No matter how broke I got, no matter how I had to suffer. No matter how I thought, 'I've got to do something pretty quick because I have to put food on the table.' I think that God finally showed me that these guys over here, Gene and Joe, these people may not appear as the kind of Christians that you have in your mind, but they would give the shirt off their back and these guys have laid their lives down for these kids. When I saw that I knew that this is the right way to go and it proved it."

Jon does not hide his excitement about the fun he had recording 'Love Education'. "This album I was happy the whole time. Even though some of the lyrics of the songs sound like I'm still going through the same thing that I always have been going through. It's just not true, it's that now I know I don't have to suffer any more. I'm really past that. God has pulled me past that. Not only did I have so much fun making this record, there wasn't one moment of sorrow. There wasn't one record company executive come down making me feel uncomfortable. We had nothing but a good time. There wasn't one moment in the studio where I got upset or frustrated. It was a beautiful experience.

"But still, because of what I've been through in the past, I have been able to release passion on this record. If you listen, there's a lot of hope and happiness in this record. I'm just looking forward to the next records. I'm just looking forward to what happens when my son or daughter comes, whichever it is. I'm so happy that I'm married now; I don't know how to describe the feeling. But when my son or daughter comes, who knows what's going to happen to the music, or what's coming out of me? That record is probably going to be very happy. A child has to change a man, when he's never had one. I expect some kind of change to come, I know it's going to be a good one. But we're going to make great records."

Jon comments that through these hard years came a real life mentality that will always affect his lyrics, he describes this period as a time of sorrow and soul searching. "I think it was God's plan and purpose for me to suffer and go through these times. Because I don't think God ever wants me to remove the pain and suffering out of my songs because it will always be there and always come out of there. I've had so much of it that I think I'm always ready to put it in the song because sometimes we need to cry and need to hear lyrics that make us break and start crying, to really get our feelings out to be healed so we can see what the Lord has for you today and in the future."

Jon is happy to look to the future. Because of his past he has learnt what it means to keep going despite all difficulties. "I think when you go through so much you finally come to realise that life is screwed up and then there's Jesus. When you get to the point that you realise and admit that life is bad and it ain't gonna get any better, and that's all the more reason to keep focussed on Christ and move forward in Christ. That's all there is. That's the realisation to know that if there is any joy to be found in life, it's to be found in Christ and the blessing to be shared in Christ. If you get married and Christ is in the picture, the joy is going to be great. If you do anything, and Christ is involved and you acknowledge him for it, it's going to be great. But also there's going to be persecution and there's things in life coming against you, but they only are going to make you stronger and make you tougher and mould you into what God wants you to be. Like CS Lewis said, 'God's love is like the blows of a hammer and chisel, chipping away at the imperfections in you to make you perfect and complete.'"

Those who like to read the liner notes on an album will no doubt be surprised by the fact that Jon Gibson not only wrote, arranged and produced the album but also played all the instruments himself, except for a few solos. Comments Jon, "I'm not a trained musician. I never took music in school. I dropped out of school in 9th grade. I don't know how to read and write notes. I don't play with any proper technique; I just grab instruments and bang on them. Everything I learned to play, I figured out myself. So I'm not the best musician, but if you give me time, without people coming around, pressuring me ('We have to finish this record by the GMA') when I don't have these pressures on me, I can do tracks closer to the feeling I really want if I play it myself.

"It takes me longer, but I get more of the feeling I really want if I play it myself. I think that on the next Jon Gibson album you're going to hear even more of that. I'm probably going to play all the drum sounds myself, real drums and there is one song on the album that I'm playing real drums on and that's the song 'So Blue'. I'm really looking forward to playing live drums on all of the songs. It takes me a while to get it. You might have to stop me, when it's all done in the end it's solid, whereas some of these drummers, these musicians that I worked with, like the guys that did 'Forever Friends', they came in, never heard the music, they just went off for a couple of charts that the piano player wrote one day, listening to the music actually that day, listening to the rough versions that I had already on tape. They came in and laid every version down in about an hour and a half. Those are amazing people. That's way beyond me. But I have to say that there's a difference in the sound I have on my new record. 'Love Education' is more me.

I have been a fan of yours since 1991andCAVE that was the first Christian concert that I had ever been to. I became a Christian a few months before. I have always loved your lyrics and they have got me through some tough times in my life. I think you are so real and humble, and that's how God uses you to touch people's lives. You have touched mine definitely and I thank God for you :) God Bless You! Please come back to Ventura sometime, hopefully Calvary Chapel Oxnard, it would be such a blessing to see you again!