Tony Cummings reports on the singer/songwriter with the "Nothing Better" radio hit, JON GUERRA 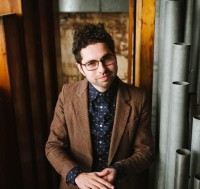 With the explosion of modern worship music literally hundreds of churches have taken the opportunity that large congregations and new technology provided and released their own worship albums. Hardly surprisingly, a number of the worship leaders featured have then gone on to release albums under their own names. Such is the case of Jon Guerra whose "Nothing Better" from his 'Little Songs' album is currently getting plays on the Cross Rhythms radio stations. Jon had previously received critical acclaim for his contributions to the worship albums released by Chicago's Vertical Church.

Jon was born Jonathan Allen Guerra in Whittier, California on 19th September 1985 though it was in Houston, Texas that he grew up until he was 12. Fascinated by music he learned to play guitar and listened avidly to such artists as Radiohead and Rufus Wainwright. By the time he left school Jon was writing and recording music. In 2011 he released a Christmas single with his wife Valerie Anne and more lucratively penned some jingles. He admitted, "I did jingles for Comcast, All State Insurance and several lesser known companies. Nothing as ubiquitous as the McDonalds "Ba-da-pa-pa-pa", but if you live in the Chicago-land area you've probably heard some of my jingles."

The multi-instrumentalist Guerra got a big lift when he became involved in the quickly expanding Vertical Church. He explained, "I was invited to a writers retreat with Vertical Church Band after running into an old friend at a wedding. I didn't think it would lead to anything significant, but of course God had different plans. After a couple of my songs were chosen to be on the live record 'The Rock Won't Move' I was asked to be a part of the band. I'm now a songwriter and worship leader with Vertical Church Band, which is a ministry of Harvest Bible Chapel in Chicago. HBC is my home church where I still serve as a Sunday morning worship leader for part of the year. It's one of the most fruitful, creative partnerships."

Also in 2013 Jon recorded his first solo album 'Hue' under his then stage name of JAGUERRA with producer Chuck Bein. At the time of its release Jon told New Release Tuesday, "I guess I was sort of aiming for baroque ambiance but, hopefully, without getting too indulgently obscure. At the end of the day, I just want to write good songs that make people feel something. The treatment of the production is a combination of my and Chuck's idiosyncratic tastes. Whether I'm on piano or guitar, whether there are horns or there's a verby pad-synth, the linking strand is my voice and the simplicity of the song. At a show, those are the things that stand out because, well, it's just me, Valerie and our instruments. I wanted the record to be an honest representation of the live performance, while still doing due diligence to elucidate the feeling through the production." 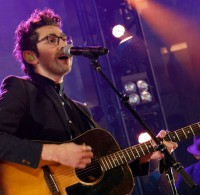 It was the release of 'Little Songs' in April 2015 which took this most intelligent of singer/songwriters to the next level. Journalist Timothy Yap wrote, "'Little Songs' is the perfect combination of upbeat songs that can be played with the windows down, and introspective melodic songs that cause the listener to look inward and upward." Jon explained how the album came about: "I had songs that were worshipful, but not congregational in nature. I brought those songs to VCB and they loved them, but knew they weren't a good fit for that band. A few people at Sony/Provident caught wind and were also very encouraging about the songs. Truly though, it took me several months to come around to the idea of making a solo record with that material. At first, I didn't see the point. After a ton of prayer and conversation, I realized that I could give testimony through song in a way that would be helpful to others and fulfilling for me. It was only a nudging at first but has since blossomed into conviction. I believe God has called me, for this season, to give testimony of his love and grace through songs on solo records."

But why the somewhat self-deprecating title 'Little Songs'? Said Jon, "It's called 'Little Songs' after the first track on the album called 'Every Little Song'. The lyrics pretty much sum it up: 'And so receive my words/And so receive my tunes/They are my best, they are my first fruits/Until I see your face in heaven's great view/These little songs are what I have for you/They are the best that this little child can do/So, for now, receive my heart through every little song.' At the core, my songs are an offering. God has given me himself, and in turn I give him my best efforts, my best poetry, my best melodies (though even my ability to write songs is from him, but that's for another interview). That offering is also for others, wherever they may be on their faith journey. I always write within ear-shot of my friends who don't believe the Good News, because Jesus always did his ministry within ear-shot of those who didn't believe. 'Little Songs' are my best attempt to be faithful with art and ministry at this stage in the game."

So how do the tracks on 'Little Songs' differ from Vertical Church songs? "Fundamentally, these songs aren't intended to be sung by a congregation. A few of them are, but not the majority. They are songs that I sing to people, not necessarily with them. My intention is still to lift their eyes towards something bigger, but in a different way. Inspiring art is the goal. I believe worship is incidental to inspiring art, so in that sense it's still a worship album. But crafted, beautiful art is the goal."

Worshipful songs are hard to come by nowadays and I so appreciate the passionate, creative, and artistic endeavor of Jon in Little Songs. My favorite if I had to choose one is I Will Follow. Also, It's Almost Christmas with Valerie is so heartwarming and delightful, I listen to it long after Christmas. Philippians 1:3-6 comes to mind when I think of you...