Joni Eareckson-Tada: The paraplegic author and singer speaks about being a candle in the darkness

JONI EARECKSON-TADA lived for 17 years as an able-bodied person and has lived for more than 20 as a paraplegic. She spoke to Drew Kelleher. 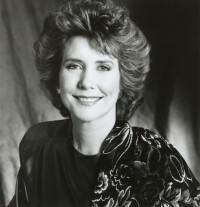 Joni 's music career is just the latest in a string of creative endeavours - and one which came as a surprise to her as much as to anyone else.

"I knew I could always sing but I knew I couldn't breathe easily - yet to be able to sing without chest muscles is really something. A man from Word records heard me singing one day and he was surprised that I could project my voice so well...but it was my mother, my parents, who were most surprised - they were the ones who had seen me in hospital, gasping for breath - straining for breath just to get into my wheelchair.

"But I really love singing, especially about the Lord Jesus, because music was so special to me during my depression.

"I am by nature a creative person. Mainly a painter...my father was a painter also - when I was younger he would hold his hand over mine and together we would create beautiful originals. We were a pretty well rounded out family. We would go hiking with dad and take the sketch pad with us," said Joni.

Those days were close enough to the idyllic to be remembered fondly by any adult, but as Joni's only allotted days as an able young girl they are now days treasured as memories.

Her Christian parents were full of love for one another and each of their four daughters. They both encouraged their children to seize each day and to learn from and enjoy living it.

Johnny, after whom Joni was named, combined the spirit of an artist with the form of an athlete. He represented the US in the '32 Olympics as a wrestler. Having also built the family home in Baltimore with his own hands he showed an independent and go-get-it nature which has been amply reflected in his filial namesake.

Joni could hold her seat in the saddle almost as soon as she could walk and, at the age of four, gained the distinction of becoming the youngest ever participant of the 100-mile 'Cheyenne Ride' from Laramie to Cheyenne.

Converted to Christianity as a 14-year-old at a "Young Life" weekend, the All-American girl remained a fun-loving person with her new flame of faith.

That candle burned without a flicker until she was 17 when it was almost doused by a headlong dive into Chesapeake Bay.

But that potentially fatal accident was mitigated to the rank of fateful when her sister Kathy pulled her limp body from the dark waters of the bay. For Joni, however, that rescue was not immediately welcome. Confined to a hospital bed and a canvas and metal frame she learned that she would never walk again nor even have the use of her arms or sensory nerves below the shoulder. The accident had resulted in a break between the fourth and fifth levels of her spine.

She says that if she'd had the ability, she would have killed herself - though, ironically, having the ability would have mollified her.

So with suicide not an option and stagnation not in her vocabulary Joni began the agonizing process of accepting the prison of her body as the new temple of her spirit.

"After the accident I was very depressed and suicidal with despair," says Joni. "I argued with God vehemently.

Dear Joni; Your life story inspires me whenever I am down in the dumps. September 3rd Lord willing I will be 77 years old I am an African American male that grew up a few blocks from Moody. (Orleans & Walton) The Lord, Moody & the YMCA has blessed me with a wonderful teaching career. I'm attending the Church of one of my Phys. Ed.students, Shando Valdez. He gives his sermons in Spanish & English. There is a Pastor at St Paul Church about 2 miles from me in Bloomingdale, sometimes works & brings a child to your camp. (Brandon Woosley). I'd love to meet you sometime.
Agape Love, Will Wright

Joni, we corresponded in the 1970s when I was a new neuro RN & needed to understand more about your inspiring life. I just married at 67 a wonderful man. We met 26 yrs ago & just this summer got together. We have the same birthday. I want to come anew to Christ & ask for your prayers please. God bless you Joni. Love, Victoria

We recently saw and heard Joni at the Fullerton EVFree Church on April 11. A few of us discussing her life and it's impact on so many, wondered what has happened to her mother and father and sisters?
Thank you,
John A. Winterling

For more on Joni visit the Joni artist profile