Larry Norman: The Growth Of The Christian Music Industry

In the first part of a personal history, LARRY NORMAN, Christian music pioneer, charts the rise of Christian music from its roots and, based on his experiences, gives his own perspective on the collision between creativity and commerce. 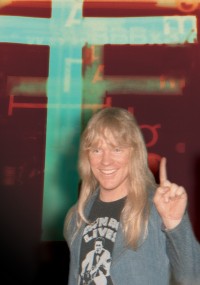 In his most recent "State of the Union" address to the American people, President George W Bush said, once again: "The state of the Union is secure." And this is a country at war in the Middle East and at war within its own borders: the "blue" States against the "red" States.

And what about the "state of the gospel music industry"? Is it also secure? Financially - certainly. The industry has grown to become a reliable source of income for the retail vendors of even the most fallow manufactured CDs, DVDs, printed books and magazines. Also for the "originating" companies which own the artists' records and distribute finished product to the retail vendors. And for the producers who submit the mastered digital information, graphics and sheet music to the originating companies. For these mavens of culture and these arbiters of taste, "The state of the industry is secure."

But is Christian music fulfilling its true purpose? Does it "Go into the world and preach the Gospel," spreading the Good News down the highways and the byways to a dying world? Does it glorify God? Does it elucidate the nature of Christ so that men might see him more clearly and thereby be converted?

I vividly remember Julie Miller's song "S.O.S. (Sick Of Sex)". It gave many people what I would call "a shock of recognition." Some hated this song for the momentary short-sightedness they experienced. But Truth doesn't always need to be wrapped up with a pretty bow. Truth is beautiful in itself, simply because it is the Truth. DC Talk's "What If I Stumble?" also touched a nerve of conscience in people, regardless of age. God's Truth Music can be powerful whether it comes through the voice of Bono, Bob Dylan, Mark Heard or artists whose names you've never heard.

But for the moment, let's call these musical "artists" Thinkers - Musers; meditating upon aspects of Godliness. "Artist" is an overtly abused word in our secular society, like the words "love" and "compassionate". Be honest: every singer is not a "pop star" nor is every actor a "film star". Likewise, let us postulate a gravid difference between an "artist" and an "artisan" - and the birth process of creativity.

An ARTIST says something because he feels it needs to be said, even if it's something few people want to hear - even if it will guarantee the winnowing of his following and possibly bring about the end of his popularity and his income.

But an ARTISAN ... ahhh, an artisan says something PRECISELY because it has already been said before - and because it has been proven to have a commercial value with an established market of consumers who will pay to hear it said again. Because it "tickles the ear" and because thousands, millions of people want their ears tickled.

But an artist? I believe there are very few true musical artists who labour in either the secular or sacred fields of toil. Many of them give up after being battered and abused and silenced. Very few real Artists find themselves able to soldier on. The brilliant Joni Mitchell gets pushed aside and marginalised though she continues to create great music by going beyond the four minute pop single and into what could be called jazz. The primal Lenny Bruce is sued relentlessly and spends all of his money on lawyers and court appeals until he is broke and decides to make his exit.

But an excessive quantity of artisans, arts-and-craftsmen and the noise-mimics who make modern "music" will always be found breeding, pushing their way toward some imagined "top"; lined up and waiting for a chance to display their parlour tricks and vocal gymnastics - much like the swollen ranks along the sidewalks outside the doors of the American Idol auditions.

Looking back in history, remember that Martin Luther (1483-1546) wrote words for "A Mighty Fortress Is Our God," John Newton (1725-1807) wrote "Amazing Grace" and the modernist Pauline Mills (1898-1991) wrote "Thou Art Worthy". We know the timbre and temperament of such music and the respectful occasions during which they have served. These simple songs of faith are not outdistanced and made irrelevant by the modern, high-powered music industry. These songs are still potent and primary and trans-cultural. They remain "futuristic" despite the technologically advanced superstructures of computerized recording processes. And the hymns remain "modern" and "relevant" even in the face of global economies and politics and the shifting parade of social mores and acceptable immoralities. They are undimmed by the theories of Freud, Darwin and Einstein. For when all of this 20th and 21st century "insight" and "improvement" fade away, the best hymns will resonate in the future as being far-sighted and visionary in a hostile world.

But just HOW did newer hymns, songs of worship and devoted paeans of praise, become compromised and evolved toward the counterfeit during the last half of the 20th century? How did these musical transgressions take parishioners from the unspoken "aw shucks" of humbled congregants listening to solemn etudes in hushed chapels and sawdust-floored tents ... into the sponsored pavilions of monster sound systems and high tech lighting into "shock and awe" - with bumbling slam dancers in mosh pits at the feet of screaming lead singers, projectile commenting as they stalk the stage with tattooed limbs and pierced and punctured facial features?

"Don't you know that you yourselves are God's temple and that God's Spirit lives in you? If anyone destroys God's temple, God will destroy him; for God's temple is sacred, and you are that temple." (1Cor 3:16-17)

Though it's probably immaterial to God what anyone does to their actual hair, the physical body is the "temple of God" in each believer's life. Inserting skull screws into one's head to sport a mohawk of titanium upon one's cranium should not be admired and even suburban cosmetic surgery, with chin and cheek and breast implants, cannot be a compliment to the Creator who has made us.

Thank you for this enlightening and insightful article; one that reminds me of the real purpose of Christian music.

I'm very thankful that Larry had the experience and opportunity to share his insights. I know of many people who can feel a discord in wanting to pursue a music career and a ministry career. Seeing the hype that is the industry and being able to walk away and trust God to move is sorely needed in Christian music today. Indie with Excellence can be done today, let's pray that many more will take up that call.

Amen Larry. That was very inspiring... It comes down to simply loving God enough to trust and obey his prompting in each and every moment. Not for the sake of personal gain, but for the sake of sharing the love of Christ with one person at a time. This article was fuel for my soul. Thanks.

An amazing article. Larry nails it.
He was a true pioneer and visionary.
Keith Mohr
Indieheaven

A friend sent me this link, a man I call "a Writer of Writers". As a writer and graphics professional who now teaches in the local jail and is a caregiver, because of my love for Jesus Christ, I could not put my feelings into words about my large church's Contemporary Worship.

It is fine - and the leader is a wonderful and gracious leader - but the sanctuary must be darkened to be able to see the lyrics on the screen. The stained glass windows must be covered up. Is this a subtle hint from God? He DOES love irony, I have noted.

I guess what I perceived innately that Larry expressed so well is how the church follows what is popular, and common. I am sadly not so much of an Artist as an Artisan, though I hope writing Chrisitan SF will enable a breakthrough in that area.

I know the thrill of witnessing first hand and of preaching the Good News. I also know the pain of having the un-creative, un-dynamic use the "tools of the trade". It is human nature to try and find the "pattern" that works.

What works is boldness, courage, and a great love for Jesus Christ. Larry took it all Jesus' teachings to heart. What amazes me is how well he speaks of what happened to him without acrimony and bitterness. I mean that very sincerely. I would be raging mad. He makes his points wisely and without rancor.

Thank God for Larry Norman. I look forward to meeting him.

My takeaway: be an Artist. Plenty of Artisans will follow.

Underlying the dumbing down, copycatting and incessant pitching are the technologies enabling the information explosion and market globalization. Its pervasive and relentless.
The church never stands completely outside culture. Inevitably, we are going to get the balance wrong. Thank God that he prevents us from the worst excesses.

Larry at his most articulate and insightful best.

Evangelicals have been struggling with the concept of art for decades. Great artists may share much gifting with prophets - and that means we frequently don't recognise them. We've now got 40 years of experience of popular culture and it's become clear that the greatest Christian talents of say the 70s were little recognised at the time and were frequently derided as "out of date" and "not relevant". Now vinyl by Water into Wine Band or Caedmon is trading for upwards of 1,000 dollars. And, yes, one factor was the CCM commercialism that swamped the British market.

Wow! Refreshing Larry. Is this encroaching into the Church? 'Bands' are forming, the 'leaders of the musicians' are turning into 'Lead Worshippers' & seem to have a monopoly on' worship'. The noise levels are rising to that of the world's. Children are frightened by this, widows are in distress & we are poluted (James). What's God's favourite instrument? The congregation. Remember that when you do a sound check!