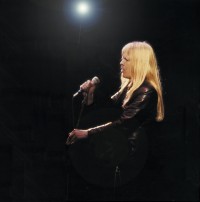 THE FRONTMAN of the mainstream's alt-rock band The Pixies, Frank Black, spoke in an interview in the September issue of Mojo magazine about his early teen experiences of Christian rock pioneer Larry Norman. He said, "That was in southern California and there were proselytising concerts at various churches that featured musical performers more in a rock vein. He stood apart as the most different, the most edgy. I saw him a lot, whenever I could. There was a Christian bookstore and I was able to find his records there. Yeah, it was a heavy duty thing at the time."