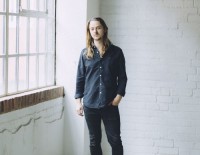 The British church is continuing to produce worship leaders and singer/songwriters of the highest quality, and now, with the release of the 'O, Peace' album by Josh Gauton, a new name can be added to the list of communicators enabling church-goers of all types to connect with the living God. Birmingham-based Gauton is currently the creative director of Worship Central, and his debut full-length album for new label Running Club has produced a flurry of accolades, the Cross Rhythms reviewer enthusing, "From the full bore romp of 'Cathedral' to the ethereal 'Time's Not Wasted' the music is matched by his lyrics that manage to get the listener thinking as well as worshipping God. There are a couple of label mate collaborations here: 'Wounded For Me' features Rivers & Robots and the bouncy 'Wild Love' features Elle Limebear who, as everyone will probably know by now, is Martin Smith's daughter. This album has such a fresh feel in a market place that has got rather set in its ways of recent years and with no weak songs, even the enigmatic '~ ~ ~', it begs to be played again and again and again. Go and get this now, it will not disappoint." Josh spoke to Cross Rhythms about his life and music.

Tony: Has your worship activity been taken to a new level by the album launch?

Josh: "Yeah. It's been great going through the album process - putting it out and seeing what people think, hearing people's reactions. I haven't had many people say, 'I didn't like this,' but I'm sure they've thought it. It's been great getting the feedback - different songs meaning different things for people. For me, that's the joy: being part of people's processes, people's stories, in some tiny little way, writing something that stays with people. It's been awesome."

Tony: What are the one or two songs that have connected most often with people?

Josh: "The title track, 'O, Peace' - for me, there's a big story for that. It's a lament for a lack of peace, an open and honest dialogue which people respond to well. People are up for that kind of discussion. I've had a lot of people love the instrumentation on 'Cathedral' and 'Time's Not Wasted'. Music-wise, both were my favourites to put down, so that's been cool to hear that - particularly 'Cathedral'. It's a fun, fast, indie rock, anthemic kind of thing. That's one people seem to get on board with."

Tony: Was there a lot of turmoil in your life when you wrote "O, Peace"?

Josh: "Yeah. 2018 was a bit of a weird year for me. I ended up dealing with a lot of loss in that year within my family. That song came out of that process, and I was writing through the whole time. Once we put it down, that felt like a milestone. When those situations were ongoing, I was able to use that song for myself as a therapeutic exercise, trying to get that out of my system. It felt authentic to what was going on. I think people respond to that. Where they can feel and hear authenticity, that resonates."

Tony: Tell me a bit about your life.

Josh: "I was born in Canterbury, grew up there. I was there for 17, 18 years. Both my parents were Christians, and I loved being in that environment. There are huge pros. You get to experience all this different stuff, and you get to see that faith walk modelled."

Tony: Did you experience any kind of crisis of belief?

Josh: "I wouldn't be able to name a particular time. There's people who are very sure about things, and people who are less sure. I feel like I hit crises of faith very regularly, so maybe that period is eternally ongoing for me. I'm less sure about some things that other people are, and that's why it's good to have lots of people together. There's beauty in the faith quest within doubt, and there's beauty in the faith quest within certainty. For me, growing up, there's definitely a particular moment where I realised it's not the same as having a parent's faith, or the faith of someone in your family. It makes sense to either choose it for yourself or choose to not choose it for yourself. That was the moment for me. I thought, 'I'm going to see what this is like to choose that for myself, to try and follow God in what I do and how I live my life'."

Tony: You began as a musician by playing violin.

Josh: "Yeah. I grew up in a fairly musical household. My dad played guitar and enjoyed singing. My mum sang and was also quite an accomplished clarinettist, but never played. I grew up with that around. When I wanted to start learning an instrument, I was eight, I started playing violin and played it 10 years, but, sadly, I left that by the wayside because I thought guitar was a lot cooler. I wish I'd kept up both, but that's how it goes when you're trying to impress all your friends."

Tony: Did you start playing guitar when you were in a worship group?