Joshua Luke Smith: The wordsmith who is a poet not a rapper

Joshua Luke Smith has been much praised on the Internet although there doesn't seem to be much consensus on how to describe this hugely talented communicator. Premier Gospel website suggested he is a "hip-hop artist from Bath," Relevant magazine called him "a craftsman lyricist and a captivating songwriter" while OnTheComeUpTV website stated, "Joshua proves he can rap and sing to a good standard." So is Mr Smith, whose "After All" and "Broken Things" have been chosen for the X Rhythms playlist, happy with the description "rapper"? He told Cross Rhythms, "No. There's a certain identity that comes along with being a rapper, and that's what I'm separating myself from. 'Rap' stands for 'rhythm and poetry'. I'm a huge fan of rap and hip-hop. But I think that when you are a rapper you are confined to the genre of rap. When I approach a project, it's something I hope crosses genres and is able to express different musical sounds."

I'm not sure I completely understand Joshua's distinction of terms so I pursue it. Would he be happy with the description "slam poet"? He responded, "Slam poetry is an amazing art form, and I have dealt in slam poetry before. I performed at the London Roundhouse two weeks ago; that was a slam poetry night. I love slam poetry." What then about written poetry? I understand Luke has a book of poems coming out. He responded enthusiastically, "I'm looking at putting my first book out in the next year - an anthology of poetry. The written word, page-poetry, is as expressive and emotive as the spoken-word. I was reading someone's work today and was so impressed with how much he conveys in a matter of lines without hearing his tone or his cadence, anything like that. I feel like I'm still learning that art form, so I don't want to be too quick on it."

I commented on the origins of Joshua's intriguing accent. He explained, "Life began in London, and then we moved over to Pakistan. I had my formative years growing up in the missionary community of northern Pakistan, which was a real cocktail of accents, nationalities and cultures. I probably picked up my twang there. We moved back to England, up to Bradford, then in 2008 I moved to Canada where I met my wife, then moved back to the UK. My accent is an absolute cocktail. I think I sound standard English accent, but obviously not, because every person I meet comments on it."

In 2012, while still at University, Joshua and his wife Kara had gathered around themselves a bunch of kindred creative spirits which were to be the foundation stone of their pioneering record label and creative hub Orphan No More. "That was the defining part of why we started Orphan No More, me and my wife. I was on a train home from London Paddington one morning, after meeting the record label I'd sent a demo to, and I realised I'd been trying and striving so long to get someone's approval of my music it had taken the love of doing it out of me. I just thought, 'Why am I waiting for someone else's validation to do this when I already feel it from God?' So we started Orphan No More basically to empower people - the tagline of Orphan No More is 'Everybody has a message' - and to remind people that they don't need the validation of a record label or anyone else to express their message and share their story. Orphan No More is beginning to grow to become a platform from which we are seeing incredible artists expressing their message and telling their story. I'm incredibly excited about it because it gives me the opportunity to build something bigger than me. I don't want to end my time here and just look back and say, 'I built a name for myself.' I want to impact culture, and the way we impact culture is by empowering people to impact people." 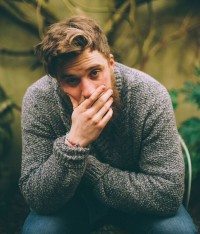 Joshua's debut EP 'Between The Saddle And The Ground' was a success, landing in the top 10 of the UK and international iTunes charts which led to the young poet receiving BBC 6 music radio play as well as features with BBC 1Xtra and the London Roundhouse. In March 2014 Orphan No More released its first album 'All Shall Be Well' by singer/songwriter Esther Moore. Said Joshua, "Our tagline is 'everybody has a message'." He explained the origins of his label's unusual name to Milk Magazine. "It comes from a piece of Scripture. This is a verse in John 14:18 when Jesus turns to his disciples and says, 'I will not leave you as orphans; I will come to you.' For me, this is one of the most powerful promises from God and for me to give. This message for me represents family, friendship, community - I want to put out music that carries this message: that all of us are loved, not forgotten and there is hope and a future for everyone."

In July 2015 Orphan No More released Joshua's 'Your Beauty' EP. It received hugely enthusiastic reviews, Dominic Doring writing, "Joshua Luke Smith is a musical genius. Not only can he spit bars with truth and heart but can also create melodies and hooks that get stuck in your head." One of the tracks on the project is "Carry Me" which speaks of Joshua's struggle to find his own identity as he emerged from his teenage years and his at times complex relationship with his mother. With such transparent lines as "coz beneath the peer pressure and drunken nights out/Mamma I just want to impress you and make you proud."

Another powerful track on 'Your Beauty' is "Jack Of Spades" conveying our battle to break free from the mental cage of fear to find a life of freedom. It goes, "I'm the Jack of spades and I'm digging the Devil's grave/If David killed him with a stone then I can kill him with a poem." I asked the wordsmith whether he was falling into the trap of the old school gospel rappers and dissing the Devil? He responded, "It is the old trap. I believe life and death is in the power of the tongue, and the word is a double-edged sword that slices through bone and marrow. When I write it's to take ownership over that which I want to have power, speak against and in some cases tear down - fear, oppression, injustice. I write poems and songs that are anti- all those things, and I believe that you can do some real damage with the tongue and with words. That's what I'm alluding to." The track comes with a powerful video directed by James Green and made a shattering first cut on 'Your Beauty', released on iTunes in July 2015. Throughout, the six-song project is unflinching in its confessional honesty. Joshua said at the time of its release, "It burrows deep into the archives of my life, telling stories I sometimes wish I had forgotten and experiences I feel privileged to have had. It captures some of my greatest challenges and celebrates the most splendid triumphs I've ever known. I've come to believe my artistry is less about how I make my work sound or look but simply about the story that I choose to tell."

I asked Joshua whether, when he was recording his songs, he had feelings that some lines were going to be understood by Christians and others by non-Christians? He responded, "I write for the humanity in people. When I play a gig, the aim is to connect with every human in the room, whether they're atheist, Muslim, Christian; that's really it. But it's a good question. I don't think I go in thinking, 'That line will connect with that person', because it doesn't work out that way. People, whether they're people of faith or not, are at different stages of discovering what it means to be human; that is really revealed in the life of Jesus. For a long time I didn't know what we're here for; and there were people around me who weren't Christians getting on with it better than I was, discovering what it means to love without reservation and condition - all of that which Jesus displayed for us. I don't think of who will or who won't get it, I write it as an overflow of what I'm processing, and see who gets it."

I asked Joshua whether his study of philosophy helps him to get into a meaningful dialogue with somebody who subscribes to something like postmodernism or existentialism?" "I think it does, and I'm really grateful for it. I learnt so much during my degree, and I still I am, I'm still trying to keep up my reading. I did the philosophy degree for two reasons. I wanted to discover what it means to be human, and there's been a lot of great thinkers, men and women, who have pursued that. The other is I wanted to understand what angle people are coming from when they bring questions towards faith. I wanted to be able to meet them where they're at and have a little bit of understanding where they're coming from. It was an incredible time. I would recommend that Christians read philosophy and get into understanding where people are coming from with the questions that they have."

Another recording is now in the pipeline. He said, "I'll be putting out another project, if not two, later this year. I'm continually writing. I'm hoping to release an EP that will be a collection of spoken-word poetry as well as a few songs - even a couple of songs from 'Your Beauty', but performed in an acoustic form, like we often do them live. We'll be gearing up for our next proper release towards the end of the year. The first project will probably be called 'Heart Of Man, Volume One'. It will be an ongoing series of poems and stripped-back songs looking at what it means to be human. I can give you that one, but the rest is still in formation."