Joshua Micah: An LA-based singer wanting to open a Parachute of trust 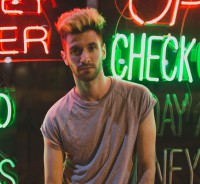 Cross Rhythms radio listeners will undoubtedly recognise "Parachute" by LA-based singer/songwriter Joshua Micah. It's been called by one website a track "set to redefine how the world thinks of Christian pop" describing it as "insanely catchy, heartfelt, soulful and a totally fresh sound in beat, instrumentation and melody." So who is this singer who was already a big hit in social media circles with over 700,000 Vine followers, 40,000 Instagram followers and 40,000 Twitter fans? To find out I spoke to Joshua about his life in music.

He began, "When I was 18 years old I signed a record deal with a company in New York City, an indie record label and I was with them for a couple of years. I had a really bad experience with them and it really made me not want to make music anymore. I wasn't trying to be an artist after that so I was like, you know what, I'm just going to be a songwriter, and be the guy that nobody knows about but writes songs. And so I moved to Los Angeles and I was pursuing just strictly songwriting and I realized I still had so much I wanted to say with music and the next thing you know I found myself picking it back up. I realized this path is so difficult and there are so many unknowns with being an artist, so I really needed to put my trust 100 per cent in God.

"At the time I wasn't putting my trust 100 per cent in God, I was doing my things in my own ways and I realized that that only got me so far. So, I was in LA and I had this moment in my studio where I was trying to write all this music for myself and it felt like I was just hitting my head up against the wall, trying to do things in my own way. There was a moment when I just felt like God was: 'Are you ready to do this my way? We did it your way for so long.' And I felt like he was so faithful in letting me do my own thing and he kind of protected me. The way I see it, I feel like I was walking my own path and he was allowing me to do my own thing but standing behind me and just reaching his hand in front of me and hitting things out of my way that could harm me. I got to the point where I realized I should be behind him and he should be leading me. So that's kind of like what that moment was for me. That's when I started to write 'Parachute'. I wrote that song so fast, it was so natural. The only way I can describe it is that that was the thing God wanted me to do. So here we are today. I worked with some great friends of mine in LA, great producers who go by the name Hatch. Now we have 'Parachute'. And now it's on the radio and it's doing so much more than I expected it could do.

"So much can happen off one song, which is kind of cool. I can see with 'Parachute' it's being received so well. It gets me so excited that I'm working on my new song to create a five or six-song EP. It creates that excitement because I know people are waiting for it and I know what I need to write. The way 'Parachute' started with radio was probably the most non-traditional way to get on the radio. I had it done, it was mixed and mastered and on my computer and I was like: I'm not signed, I don't have a manager - it's just me and a couple of my friends in LA that are just great people who are trying to give me some advice. So I sent the song to a couple of radio stations - I went on google and I typed in Christian music stations and the first ones that popped up I shot them an email and put a little short message there and believe it or not every single one of them got back to me within a couple of days and they loved the song. And then the next thing you know one of those stations put me in contact with an amazing radio promoter who is now a great friend of mine - a guy named Josh Lawrence - and he was able to make it more of a professional release to radio. Then we were able to send it out and everybody got their hands on it. I think your station was one of the ones that I emailed in the beginning. I'm pretty sure. And you guys got back to me, so thank you for that." 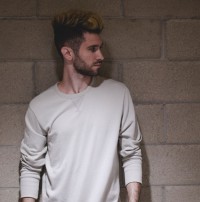 Joshua's recording history goes back to 2012 when he recorded a single "When The World Ends" and an EP 'Let It Go'. They were recorded in Barcelona, Spain. Joshua explained, "I have family in Spain and they're in the music business. I went there when I was 18. I come from a very faith-based family. I grew up in church. My Mom sang in the worship team at my church her whole life. Both my older brothers are musical. My oldest brother's name is Iesus; my little brother's name is Elijah, like Bible names. I grew up playing in church. I started playing drums, that was my first instrument. I used to play every Sunday starting when I was 12 years old then I taught myself guitar and I never wanted to sing. I used to say that I thought singing was for girls. That was when I was 10 or 11 and my Mom was like 'No, you need to start singing because there is something in your voice that sounds good.' Your Mom's always right and she was."

Joshua grew up in Manchester, Connecticut and by the age of 16 had formed a high school band, Like The City. Joshua then moved to New York but with his record company deal going nowhere he found himself making quick cover version videos which he posted on social media. Then some of his own songs began to appear. He explained, "I wanted to make something original and see if people like it, if they get it. So I wrote 'We're In Heaven'. It's an acoustic song." Now with "Parachute" Joshua has clear evidence that there is a receptive audience for his compositions. He is now trusting God that it will be the first of many breakthrough hits into radio land.

He commented, "If I summarised the lyrics of 'Parachute' in one word I'd say 'trust'. Like you were saying how there's this divide in Christian music and regular music, I kind of want to stand in the middle of that because I do believe in God and for me 'Parachute' is about God and it's about trusting God because I needed to in that place in my life. I mean, I need to all the time but specifically when I was in LA I needed to put my trust 100 per cent in God, so that's what the song is about. But if you notice it's not a worship song. I'm not using the word Jesus; I'm not saying God because I wanted it to relate to everyone. And the response that I've been getting from people - I have people saying that they love this song and it makes them think about their girlfriend or wife or husband and that's the goal for me. The last thing I want is someone to hear music and feel excluded and say oh, this is about something that I'm a little uncomfortable with. I believe that music is for everyone and you should be able to apply it to your situation in your life. So that's the goal with what I'm trying to do."