The Tribe: The Manchester group raising their game

With the release of their 'Raise Your Game' album, THE TRIBE do what they are well known for Â­modifying their sound to meet the ever changing tastes of today's school kids. Tony Cummings reports on the Manchester musicianaries.

As we all know, The Tribe are much, much more than a musical group. Rather, they are the spearhead for one of Britain's most significant evangelistic ministries, ManchesterÂ¹s The Message, who down the years have been the instrument in bringing tens of thousands of young people to faith in Christ. In July The Tribe will be heavily involved in the biggest mission in the UK to be mounted in post-war years, the gargantuan Festival: Manchester. Since the World Wide Message TribeÂ¹s formation in 1993 by singer Mark Pennells, rapper Andy Hawthorne and record producer Zarc Porter, the band has seen a small army of singers, rappers and dancers work under the brand name. But whoever the band members, WWMTÂ¹s focus for in-your-face evangelism has remained constant. Stylistically the group have continually evolved as they endeavoured to keep in step with their target audience Â­ the 11-16 year olds in Manchester's classrooms. An early album like 'Dance Planet' (1994) offered a pop take on house dance music while their 2001 album 'Take Back The Beat' brought in UK garage colourings. Now the band have changed again. 'Raise Your Game' is a hip-hop album with R&B influences. Ageing nostalgists looking for some dancefloor anthems will be sorely disappointed. But for those who have caught The Tribe's evangelistic vision, and recognize their need to connect with a new generation of shool kids currently listening to Ja Rule and 50 Cents, this latest version of The Tribe's ever changing musical story is tip top. We asked the band members to face the notorious quizmaster.

When did you join The Tribe? May 1997. What's been your best experience with The Tribe so far? There have been so many amazing experiences especially fulfilling my dream to be a pregnant rapper and going one further with coming straight back (part time of course) as a mum! I've had the privilege of setting up Soul Sista with Dawn Reynolds and seeing that move on under the new title of Girl International here up north. But there is nothing like the awesome pleasure of seeing young and old finding God for the first time! It is more important than ever as we recently had a girl become a Christian at one of our schools gigs and only days later had her life taken in an accident. Praise God that his timing and our availability matched up; a hard but valuable experience never to forget! WhatÂ¹s been your most embarrassing Tribe experience? I've never beaten wetting my knickers on stage at Alton Towers. It was Andy Hawthorne's and Elaine Hanley's last gig so I wanted them to remember it! Give me a Scripture which has impacted you in the last year. 'All things are possible through Christ who gives us strength.' Life is always full of highs and lows but God remains faithful always. What's your favourite track on 'Raise Your Game'? My fave track is probably Â³TalkÂ², one of Quintin's heart to heart songs (did you know he wrote this on his sick bed in half a day?!). But it just shows how awesome God is that he never gives up on us, he just waits for that moment we are willing to share with him. C'mon! 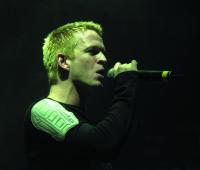 When did you join The Tribe? January 2001. What's been your best experience with The Tribe so far? A school gig in Oldham Manchester where 250 kids gave their lives to Jesus. What has been your most embarrassing Tribe experience? Throwing George into the air and losing my grip on his feet - George got hurt and I got embarrassed. Give me a Scripture which has impacted you in the last year. Micah 6:6-8. What's your favourite track on 'Raise Your Game'? "The Avenue" ...it's just the Gospel simply put, powerful to save kids.

When did you join The Tribe? May 1997. What's been your best experience with The Tribe so far? It's difficult to nail one particular moment or experience. But somewhere between seeing 200 odd Manchester schoolies becoming Christians after one gig and seeing the incredible beauty of South Africa whilst touring there. What has been your most embarrassing Tribe experience? Falling off stage during a gig in Germany! Still haven't done anything to top that yet! But ya never know.... Give me a Scripture which has impacted you in the last year. 1 Peter 2 v 17 (NIV) It reminds me of something that old skool soldiers like the Musketeers might say before they go into battle. But it's also such a challenge to live by cos we're pretty rubbish at loving each other really, and that's why we've put it on the album sleeve. It's really challenged us all lately. What's your favourite track on 'Raise Your Game'? I like 'Talk' to just chill to, but also 'As One' cos I love what the 29 boys have done and it promotes unity, an important thing! But then there's 'B-Boy' which gets me hyped, along with 'Shake The Floor' (some seriously phat beats!) erm... 'Raise Your Game' just says it all, with that basketball spin... 'Wasted' is just so in ya face!...'Let It Go'...powerful man... 'Watching', hooky summery melody... Oh I dunno! They all tend to lose their appeal after hearing them over and over and over while I'm trying to think of how to perform them for the show anyway!

When did you join The Tribe? January 2001. What's been your best experience with The Tribe so far? Sitting on a hill in Norway after an incredible gig at 3:00am in daylight, eating pizza with Babydoll and the guys. What has been your most embarrassing Tribe experience? DonÂ¹t have any! Give me a Scripture which has impacted you in the last year. Phil 4 v13. Sometimes things are hard and I feel discouraged but God pulls me through. What's your favourite track on 'Raise Your Game'? 'Supernatural', because thatÂ¹s what my God is! It talks about how big, awesome and loving our God is. His greatness always blows my mind and in context of all his creation, itÂ¹s amazing that he's got time for little me! That's HOT!

When did you join The Tribe? September 1999. What's been your best experience with The Tribe so far? The two schools weeks in Oldham where in the first 250 came forward and then 125 in the next school - rockin' ay! What has been your most embarrassing Tribe experience? Having my vocals recorded after a double gig at Spring Harvest and then my brothers played it back at my wedding - I sounded wrecked!! Give me a Scripture which has impacted you in the last year. Galatians 5:22 onwards. What's your favourite track on 'Raise Your Game'? 'Wasted' coz I wasted too much time messing about without God in my life, and I don't want others to stuff up the same way I did.

heeeeeeelllllllllooooooo
tribe rock woop !!
lz7 rock even more now !!
emma you rock luvin the programme teh dream its gud cba its finished no wooh
from kimmi and beckie

You guys are awesome! I'm so sad to hear that you guys are splitting. Very good album though...D