Manchester's WORLD WIDE MESSAGE TRIBE stand on the brink of a huge American hit. Tony Cummings has the story. 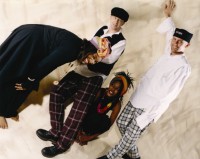 As this magazine goes to press, the 17th most played pop record on KISS 106, Los Angeles leading Top 40 pop station is 'The Real Thing" by the World Wide Message Tribe. Here at last is a sanctified dance act on the very brink of smashing into the pop Big Time. Not only that, but as everyone even vaguely familiar with the Manchester schools musicianaries will know, the Tribe's music is as in-your-face-Jesus as the music gets!

What is positively mind boggling about WWMT's potential commercial breakthrough is that it has been achieved not with the flexing of the big buck promotional chequebook but with a set of circumstances so extraordinarily "lucky" (if you're not a believer or Amy Grant) or "God-directed" (if you're Zarc Porter, the production maestro behind the Tribe). Zarc tells the seriously unlikely circumstances to the US radio exposure of "The Real Thing" single. "When we were signed to Warner Bros I think Warner Alliance (Warner Bros' contemporary Christian music arm) really felt we could go big in the US CCM scene. So they heavily promoted the "We Don't Get What We Deserve" single. We went over and did some festivals - nothing like as many as we were offered. But some. But to be truthful the single just didn't take off. Most of the Christian radio stations out there are very stylised and they don't play any dance music. Because they don't play it they turn round and say, 'there's no demand for dance music in CCM!' So anyway, after the sales of the 'We Don't Get What We Deserve' were disappointing, not downright terrible, we sold heaps when people saw us at a festival, but disappointing, I think Warner Alliance lost a lot of their confidence."

When the next album, 'Jumping In The House Of God II' (see CR32) was sent to Warner Bros no major promotional spend was planned. Now one of the internal systems demanded by every company and label affiliated to the Warner Bros giant is that each week every album issued by any of the companies be sent to the company's Hollywood head office. Normally, such is the volume of product being dispatched weekly for perusal that each album (usually something like 20 to 25 a week!) is given the scantiest of attention. But by a logistical chance-in-a-million the week 'Jumping In The House Of God 2' went into the pile there was no pile! In other words, the week 'Jumping...' was listened to at Warner Bros HQ it was the ONLY album received that week. The exec who played it therefore paid far more attention than the few milliseconds usually devoted to each album's forced-listening. Zarc takes up the story.

"The guy from Warner Bros got really excited when he heard "Real Thing". He took the copy across the road to KISS 106 and played it to the programme controller there. That chap said something like, 'That sounds like a hit' and the next thing I know is Message To Schools (the Tribe's administrative base) is receiving all these urgent faxes from the US!"

"The Real Thing" single is now having the full administrative and promotional force of a major record industry corporation thrown at it. Not only that but an astonishing eleven (yes, eleven!) different mixes from America's top mixers have been commissioned by Warners. I ask Zarc who the mixers were. "That's where it gets silly, we don't even know. We just know we're getting all these faxes going on about 12 inch vinyls, original mixes plus six others,
street dates in October...It's all fun but kind of confusing!"

Andy Hawthorne, the beloved 'Heavyfoot' rapper for the Tribe, is convinced that the experience can only be a positive one for the band as long as it doesn't pull the Tribe away from their mission to evangelise Manchester. "If it's a hit - wonderful. But I think the Warner Bros guys are already surprised that we aren't prepared to drop everything and fly over to the States for six months to promote it. The Lord has called us to minister here in Manchester. Now we've got a major new project with EDEN."

EDEN is the name of a brand new youth ministry to be set up in Wythamshawe at the end of 1997 by the Covenant Community Church and Kings Church with the Message To Schools Trust. More of this fater. But for the moment sanctified dance buffs and supporters of CCM everywhere look at the unfolding marketing drama across the Atlantic with bemused interest.