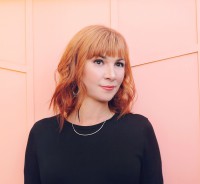 For over 10 years now, the worldwide Church has come to recognise that in Kim Walker-Smith Sacramento's Jesus Culture has a vocalist who is one of the most anointed, recognisable and emotionally involving singers in Christendom. Now with her solo album 'On My Side' the worship leader has issued a project which Hallels has admitted has "some great songs here"; CCM magazine praised its "vertical lyrics and emotional melodies that penetrate the heart"; and JesusFreakHideout wrote about the "well-crafted songs that could easily be sung along to in the car and at church." Kim spoke to Cross Rhythms.

Tony: I think 'On My Side' is your best work yet. Have you seen any reviews?

Kim: I haven't seen a lot of reviews. I usually try not to. But I have gotten a lot of feedback from different people. The best so far has been, "You're putting language to the season that I'm in right now." That's really meant a lot. In my humanity it makes me go, "Oh, I'm not the only one who walks through these seasons with the Lord."

Tony: A lot of Christian music seems to be pretending that once Jesus comes into your life everything is wonderful.

Kim: When you read Scripture, I think that Jesus was trying to prepare us, telling us it's not going to be easy: following him does not mean that everything in life will work out smooth. But I think we get that in our heads. Especially as artists - worship leaders, songwriters, preachers even - there's unspoken pressure that because they're on the stage they have to do it perfectly. That can send a message to people that they shouldn't expect to go through anything difficult or wrestle through anything with the Lord. This project was me going, 'I really want to be vulnerable - write songs that really express the journey I've been on with the Lord.' I want to tell this story; I want people to hear it's not been perfect, it's not been easy, but there's been hope, and Jesus has been with me the whole way through.

Tony: Was the recording of these songs emotionally difficult? You're baring your soul on 'On My Side'.

Kim: Definitely. "On My Side" - the song we titled the album after - was probably the hardest for me to sing. I had to stop multiple times. I had to come into the studio and process my emotions with the producer and a friend I had there with me. I couldn't get through the song without processing what I was feeling, because the emotion was just coming out in the song. I had to talk my way through it, get a few tears out and get back in there. It was the emotion coming out in every song, but it was also exposing my heart to the world in a way I haven't before. It felt like this really big thing I was taking on.

Tony: In live recordings with Jesus Culture you've prophesied in songs, extemporising phrases as you receive them from the Spirit. In the studio I suppose there's not the same opportunity to do that.

Kim: We worked hard to create a little bit of that because it is who I am. If I'm leading in a live setting, that's what comes out of me naturally as a worship leader. It felt like I couldn't abandon that completely. So I had a long talk with Jeremy Edwardson, who's produced all of our records - he's a great friend; I've known him for many years - and expressed to him that even though I'm making a studio record, I still want to find a way we can capture a little of that. There's a bit towards the end of "Fresh Outpouring" where we capture a little of that. It's not what I'm used to in a live setting, but it still felt like a piece of me. I let that go a little bit, and I had to talk myself into it for a little while. "Kim, you're 35 years old, you've been doing this a really long time, and at this point you can do this - you can branch off into something different. You will survive!"

Tony: Do you find you have to shut your eyes and block out some of the things in the studio? 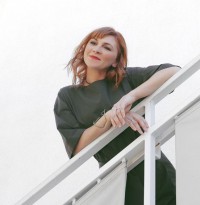 Kim: Yeah. There were a few times I had them turn off the lights - every single light - and I was standing there in pitch blackness. That was the only way I could get my mind the right headspace and focus on the song. It was a little bit distracting. On the stage there's other things that can distract you. I spent a year at theatre school, studied stage acting and screen acting. Stage acting, you have to use your entire body and all of your voice. With screen acting, you can have the camera up close, on your face, and you have to convey a huge emotion with a very subtle look and maybe a whisper. It's much harder. On stage, we can convey a message with so much - the physical act of worship, lifting our hands. In a studio, it's hard to convey that emotion and energy; and if you don't find a way to bring that, you can hear it. As a singer, you actually have a tendency to sing flat and not even be on pitch. There were times I had to turn off the lights so I could imagine I'm in a room with all the people I love and we're doing this together - something like that to build up some energy to convey the emotion of the moment.

Tony: One of my favourite songs on the album is "Throne Room", and that was a co-write with your husband and a couple of other folk. How do you work the collaboration with other writers?

Kim: I was never very interested in songwriting until the last few years when I started going, "I really want to tell my story." I was intimidated with the idea of co-writing: you're trying to write out of the vulnerability of your heart with people that don't even know you. It seemed so bizarre to me. Chris York, the A&R at Capitol Jesus Culture Music works with, said, "Kim, just give it a try. Some people you'll click with, others you won't." I'm like, "OK, I'm going to step out here." I don't know that everyone approaches it this way, but I started each session telling my story. "This is what I walked through the last few years, and I today I want to write a song about this." And I'd say something really specific. I felt like it was something the Lord himself set up. All of the people that I wrote with for the songs on this record, I felt, truly listened, received me in the vulnerability, and worked really hard with me to articulate my story in song form - find just the right words, the right phasing. It was a really vulnerable experience, but I felt really safe and accepted and loved in that experience. Solid, class act people - they just did such an excellent job of listening and helping me tell the story in a way that was unique to who I am.

Tony: Have you roadtested these songs?

I real appreciate your song madam be blessed alot i need a full album from you.

I praise the Lord always because of your anointed songs. Go higher Kim and Jesus Culture.

May I say that this Kim Walker-Smith is a powerful worship leader and songstress that ministers to the deep recesses of the heart and soul of how the true walk of faith can be through valleys and mountains. I believe she has been under-rated. This CD is and has been a masterpiece of trial and faith un-diminished. It shines through in the words and emotions as she sings and bares her soul and heart to those of whom she ministers. This CD has by far ministered to me this entire year to help me process my pain and struggles like no other causing my faith to be strengthened and renewed. I love this CD and Kim Walker Smith. So glad I had the opportunity to go see her this year!
She taught me how to accept my "Brave Surrender" I will never forget the strength and power of which she ministered this message into my life. All I can humbly say is Thank you God for sharing her with us all and helping her process through this trial then share it with us!!

âOn my sideâ album keeps me awake most nights, listening to this amazing, extraordinary woman of God gives me hope for the future. I love âthis is my songâ too. Kim is changing lives of people all over the world!

Kim and Jesus Culture, have continued to turn out one great sing after another. I don't think there is a group in any genre that can compare to the volume of quality and talent over a 20 year period. They are a powerful group or alone. This is the most anointed and passionate band
Truly God put them together