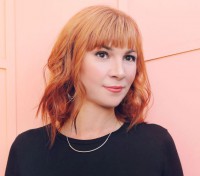 SACRAMENTO'S Kim Walker-Smith, the renowned lead singer of the award-winning Jesus Culture, has released an eight-song mini-album 'On My Side Live'. The live recordings of songs on Kim's critically acclaimed 'On My Side' album were taped last autumn on her tour across the US. Kim will also be on the upcoming Chris Tomlin Worship Night In America tour, which began in Nashville on Good Friday.