Since 2006 when the album 'Everything' featuring Kim Walker, Chris Quilala and Melissa Howe was released, the passionately expressive voice and ministry of Kim Walker-Smith has made ever increasing inroads into the world Church. Kim is an expert at juggling different demands on her time. She leads worship once or twice a month at the renowned Bethel Church in Redding, California; she tours all over the world with the Jesus Culture band; and she has already released two much praised solo albums 'Here Is My Song' (2008) and 'Still Believe' (2013). Now she has added another dimension to her ministry with the release of the album 'Home' by Kim Walker-Smith & Skyler Smith. Skyler is, of course, Kim's husband.

Skyler and Kim grew up in the same small town and even as children had been friendly. After earning his BA in Digital Technology And Culture with a minor in fine arts, Skyler attended a Jesus Culture worship conference in 2008. There he reconnected with Kim, love blossomed and eight months later they married. Said Kim, "Since getting married in 2009, we have been developing who we are as a team and exploring what we feel the Lord has created us to do. We have spent a lot of time in thought and prayer and wanted to develop a ministry name that would cover all the parts of who we are and what we love to do, as a whole. The name Only Love Remains was chosen because at the centre of everything we do is our love for Jesus and our love for people. When you peel back the layers of talent, skill and dreams, all that remains is love. 1 Corinthians 13 says that if we have not love, we are nothing. Verse 13 says, 'And now these three remain: faith, hope and love. But the greatest of these is love'."

Kim and Skyler began writing songs and ministering together. For Kim, worship ministry is not a task to be undertaken lightly. She told journalist Melissa Riddle Chalos, "I've always felt like part of the cost of being a worship leader on stage is in living that vulnerability out loud, showing people what it's like to be real in worship, that what they see on stage is what they'd see of me at home in worship. When you're vulnerable in that way, it can be scary, it's a risk, but that's what people look for and it's what they need to see and experience, that freedom. So the outcome is so much greater than the risk."

Kim and Skyler's album was 18 months in the making. NewReleaseTuesday described 'Home', released on Jesus Culture Music, "This new album carries a grassroots and folky sound as Kim and Skyler sing together on songs like 'My One And Only'. Skyler's voice and songwriting standout on the track 'Beauty Of Your Presence' among others and Kim's signature powerful voice and anointing are evident on the title track." Produced by Jeremy Edwardson and Jason Borneman, 'Home''s Americana/folk sound is perfect for Skyler's meticulously poetic songs which he admits he writes and rewrites. 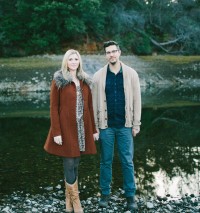 Skyler spoke about the album title. "Calling this album 'Home' took on so many meanings as the project progressed. We've always travelled so much, we've known that 'home' would have to be wherever we found ourselves. We didn't want to force anything, but we wanted to come together as a couple and say something personal and honest about our lives in relationship with each other and in relationship with God." Added Kim, who is expecting their first child in September, "From the beginning of our marriage we've been very intentional about blending our lives, taking every opportunity to be 100 per cent completely together, so this album really is a defining moment for us, a creative endeavour that represents who we are as a couple and as worshippers who desire intimacy with our Creator."

Enjoy listening and hearing about this awesome couple! So powerful are they together, and precious. Unfortunately their website, www.onlyloveremains.com does not work. Perhaps someone could let them know.