King Chav: The rapper getting the Jesus message onto the radio 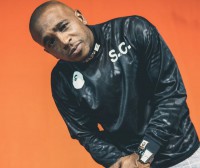 Even before the pandemic there were literally hundreds of American Christian rappers recording singles, and occasionally EPs and albums, and releasing them through download and streaming sites. Very few of these independent releases get heard beyond the rapper's home state. One place you will get to hear some of the very best of these releases, alongside, of course, cuts from some for the hip-hop artists benefitting from the marketing and promotional thrust of record companies, is Jacksonville, Florida. In that city the station WKND offer a weekly Christian hip-hop programme The Weekend Radio Show, produced and presented by King Chav. For six years King Chav has been helming the groundbreaking show. And not only has Chav, real name Chavis Gill, been presenting his weekly show he has also found the time to make his own hip-hop recordings, two of which "On The Other Side" and "Solace" have made it to the xRhythms playlist. Cross Rhythms spoke to Chav about his life in Christian hip-hop.

Tony: Presumably you were a believer before you became a rapper and radio presenter.

King Chav: Yes. I'd been raised in the church all my life. I made my first actual commitment to Christ at the age of 16, and right around that time I started falling in love with rapping as well. I'd always been a fan of hip-hop, but in high school I learnt that I had the talent to do it. In our lunch period we would have freestyle battles. So my first introduction to rap was battling other kids in school. Some of it would get out of hand but it was all in fun. But from the moment I started rapping, my content has always been clean and Christian. My first actual time on stage was at a talent show here at my church. I've just been rapping for Christ the whole time I've been rapping.

Tony: If you don't mind me asking, this work you do with the radio station, are you getting a salary for that work?

King Chav: No, not a salary. This show is just for the love and appreciation I have for Christian hip-hop. But I've developed some amazing relationships from it. Over the years, I've met some people that normally I would never have met. Relationships that I never would have had if I had never decided to dive into it.

Tony: Looking through some of these releases, back in 2016 you had a single out called "Celebration" which had a picture of you covered in blood, lying on the ground! Tell me about that concept and that picture.

King Chav: It was a little shock value, but the meaning behind "Celebration" was in every moment to celebrate life. Because life is precious, and we never know when it's our time to go. I just didn't want a lot of loss around me, so I was using that image to say "hey, let's celebrate life before it's gone".

Tony: There's quite a bit of mainstream hip-hop that seems to be celebrating death, gun culture, etc. Was that in the back of your mind at all?

King Chav: No, not really. I just speak from where I'm from, from what I've experienced. The culture and environments that I operate in. Where I grew up, I have a lot of friends that have passed away or are in jail, so I have a different kind of appreciation for life.

Tony: In 2017 I picked up on a single called "Melodies", which comes with a parental warning. Was there some swearing on that one?

King Chav: No, that was a clerical error! It just could not be changed at the time. Nothing wrong with it!

Tony: Of the other recordings you've made, there's one in 2017 called 'Time Will Tell', which has got a mock-up that looks a bit like Time Magazine. Again, an attention-grabbing image. Was that the intention, to make it look like Time Magazine?

King Chav: Yes. We were developing the concept of the project and when I finally decided on the name, I figured the cover of Time Magazine would be really cool to mock-up and do in our own way. We had a couple of different covers that we looked at, and we took the picture to look like the cover. The way that the track list for the album is set up it looks how an actual Time Magazine cover would look. There are multiple meanings to 'Time Will Tell'. It is my first release of a project so the reference point is time will tell where this music career will take me. But also on the project as well, some of the songs are just time will tell exactly who you are. Any time you experience anything over any amount of time, it'll reveal who you are in that moment. So it's best to figure out who you are and stay committed to that for the long-run.