LZ7: A song-by-song rundown of their 'Gasoline' CD

Founder and vocalist of urban evangelists LZ7, Lindz West talks us through the tracks on the group's latest mini-album

Since their formation in 2004, R&B, rock, grime and rap aggregation LZ7, fronted by one-time member of The Tribe Lindz West, have made an international impact. Their 'Ruckus' album debut was a critics favourite while their tireless touring and evangelistic events like Manchester's monthly Unleashed event have shown themselves to be skilled Gospel communicators. Now Lindz gives his thoughts about each song on the 'Gasoline' newie.

"I Will Go"
When we wrote this, we were well inspired by Matthew 28 v18-20 (the Great Commission) about how Jesus is surely with us always, to the very end of the age. So "I Will Go" is a statement that we will go wherever we feel Jesus wants us, and when we're there we're gonna be the best we can be and give our all. Just like how in the band we wanna be the best rapper, DJ, free runner, drummer, dancer. so that more people will get the opportunity to meet God and start living in glory. When we first recorded it we thought it sounded good but the first time we played it live (Soul Survivor B '08) it absolutely ROCKED! Judging by the crowd reaction that feeling was mutual between stage and crowd. The song itself is an up-beat fairly rocky R&B floor filler with catchy hooks and impressive harmonies.

"Gasoline"
The theme behind "Gasoline" is the more fuel you pour onto a fire, the stronger it burns. Just like if people "diss" you for being a Christian, that's like adding more fuel to the fire of your faith and love for God to grow more intense. Because of that background, the song is a big-beat/Prodigy style anthem with distorted guitars, crazy effects and a proper catchy chorus. As the album is named after this song you would expect it to be a bit spesh, it doesn't disappoint. Combining a real heavy beat with some new skool effects whilst keeping its commerciality.

"Big Shot"
This song is quite personal to us. It's a dirty, synth/rock type song with a big powerful chorus. It's about being humble and being encouraging at the same time. What we try to say in this song is that there's nothing wrong with wanting to be rich and famous. Go for your dreams and be who you wanna be! But when you get there, then what? What are you going to do when you're the Big Shot? It was important for us to talk about it in a song because it's easy to be someone who has a lot of authority, be in a band, be famous or have a lot of money and lose focus from who you are and where you came from. For us it's about keeping the focus on the fact that God is the Big Shot in our lives and he's given us the talent and opportunity to be able to do what we do. There's a very fine line and it would be easy for us to abuse our positions if we didn't constantly try to be humble and focused on God. That's why we say in the song, "It took one life to change who you are!" 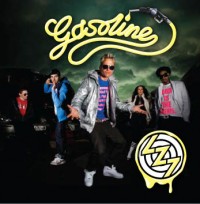 "Love Fanatic"
This is probably one of our signature pop trax with a hard hitting beat and some crazy hooks throughout. Everybody's gonna love this one 'cos it's just so sing along and it's guaranteed to get you movin'. We wrote this song because we wanted to unite all the different genres and cultures that the young people of today are in. Everybody is so segregated, so what we're tryin' to put across is that it doesn't matter if you're a mosher, skater, hip-hopper, scally or whateva, we all deserve to be shown some love and should be respected for who we are and what we believe! Don't be a hater, be a "Love Fanatic".

"Little Light Of Mine"
"Little Light Of Mine" has moved from being a concept track to the signature track of the new sound of LZ7 going forward. I was looking at the verses in Matthew 5 vs 14 and have preached on these famous words countless times. The beauty of the track is that it's all about Jesus and us making a proper effort to take the bowl off our head and let the light shine before all men, "so that they may see your good deeds and praise your Father in Heaven." The original concept of the track was to be a lot more chilled but true to LZ7 we couldn't help putting some fun in as a response to knowing Jesus and then making him known whether that's the first time commitment at our gigs or people that have been a Christian for longer.it's a call to "make disciples of all nations."

"Get On It"
"Get On It" is essentially a track built around "old school" vibes from the '80s and '90s that have shaped so much of our music culture today. LZ7's music style has been described as Run DMC vs the Beastie Boys meets the origins of the World Wide Message Tribe and "Get On It" is definitely on that tip.it fuses the kinda' '80s hip-hop with new sounds of 2008 and has the potential to absolutely thump at the live shows. The whole theme behind the track is a party about God.getting a sweat on, shaking out the cobwebs and shaking what God gave ya' coz being mates with God is well worth going mental about. If the track doesn't make you feel even slightly like moving in some sort of way then you may need to check your pulse. or ears!

"The General"
If there was a song that could sum up the heart behind LZ7 "The General" would be it due to the fact that what one man knew about God he refused to keep to himself... The main man who started the Salvation Army back in the day was a dude called William Booth. He and his wife Catherine had a massive heart for those who were less fortunate than themselves but not only were they talking about it but they put their money where their mouths were and helped the socio-economically deprived all over the world. William's nickname was 'The General' and the song is dedicated to him and his mission through the Salvation Army from the UK to the world. Since starting the Salvation Army has touched millions upon millions of lives with the great news that God loves them.

LZ7 Were amazing i love the new song Little light of mine and party time!! x ;)

lol i go dat skwl too

I thoroughly enjoy LZ7! Their music sounds so good and they're doing it all to share Jesus Christ with others. That's beautiful! I hope this band is around for years and years to come. Best wishes : )

Heyyy i just wanted to say you are the best and i lost my voice when you came to our school becoss i loved your songs that much and when i came to the audacious city church i got a CD free and i got it signed by LZ7 and a poster !!!! WOOOOOHHHH
i love you with the blonde hairr even though you dress like a girl and do you remember my mate tallulah that told you to pull your pants up :) ILYY !!!!!