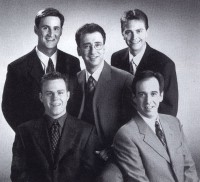 As a headlining appearance at the Revival Festival of Music in Perth, Scotland at the start of May showed, the appeal of US Southern gospel pioneers Legacy Five stretches much further than just American shores. With their trademark impeccably tight four part harmonies and their obvious enthusiasm for their chosen genre as well as communicating God's love, it's not surprising that the outfit are widely regarded as one of Southern gospel's leading acts with a barrel load of industry awards and nominations under their collective belts as well as a vast back catalogue that stretches back to their inception in 1999.

Following the retirement of legendary Southern gospel act the Cathedrals at the turn of the century, members Scott Fowler and the late and much lamented pianist Roger Bennett joined forces with Louisiana-based baritone Scott Howard to form Legacy Five with the aim of continuing in the rich tradition of gospel harmony singing as well as building on the firm foundations laid by Fowler and Bennett's former employers. With original members tenor Josh Cobb and bass man Glenn Dustin completing the quintet, it immediately became clear that Legacy Five were a cut above their competitors as audiences from across the US flocked to see Southern gospel's newest exponents in action.

The following decade saw Legacy Five grow from strength to strength with numerous appearances on the renowned Gaither Homecoming circuit as well as somewhere in the region of an incredible 75 nominations in the annual awards hosted by premier Southern gospel trade publication the Singing News Magazine. In addition, the group began plying their trade further afield with a trip to London in 2003 marking a successful collaboration with the prestigious London Session Orchestra followed by countless subsequent US and worldwide appearances that would cement Legacy Five's reputation as one of Southern gospel's most sought after groups.

Recent years have seen a number of personnel changes, not least following the untimely death of Bennett in 2007 after a long battle with leukaemia, and the group has now settled on the winning formula of stalwarts Fowler and Howard on lead and baritone vocals respectively together with Californian tenor Gus Gaches, 23 year old piano virtuoso Trey Ivey and newest member Matt Fouch on bass vocals. As two thirds of the group take a break backstage at Perth Concert Hall from their appearances at the Revival Festival of Music, I start by asking Scott Fowler why he thinks Legacy Five are still going.

"I think it's a lot of things," he begins. "We've always had people in the group who felt like this was their calling - the thing that God created them for. They've also had a passion and respect for this kind of music. We've been really blessed to have good quality men come through this organisation."

"I had great teachers in the likes of George Younce and Glenn Payne from the Cathedrals," he continues. "I was with the Cathedrals for 10 years and I never said much - I just sang the songs and did what was asked of me but I was always a student. I watched carefully to see how those guys conducted their lives - both professionally and personally. They were men of great integrity and honesty and I learnt a lot from their leadership. Legacy Five have been going for 13 years now and to have a group going for that long does say something pretty special about God's hand on what you're doing."

Adds baritone Scott Howard, "One of the things Legacy Five has done differently from a lot of other groups is that we're not concerned with what other acts are doing. We've always focussed on what we're supposed to do and what we feel God has called us to do. I think that's part of the key to the longevity of a group - find out what you're supposed to do and stick with it." 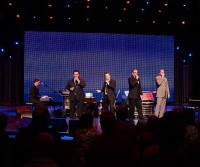 With a number of personnel changes over the years, I ask tenor Gus Gaches what it's like to be one of the new guys. "It's incredibly humbling," he advises. "For me, it's an incredible honour to get to do something like this at this point in my life. Most of the guys are like our piano player Trey who started playing in his first group when he was 16 years old and worked his way up into playing with groups like Legacy Five. I didn't do that and so to be given this opportunity is a very wonderful thing and I'm very grateful for it."

Legacy Five's performances have become famous for the group's infectious camaraderie and good humour and, spending time with them backstage, it's clear that this bonhomie is as much a reality off stage as it is on. I ask Scott Howard how important good relationships within the band are. "We live in the Nashville area and there are tonnes of great musicians and singers but we tell people all the time that, if we're looking for someone to fill a spot in the group, it's hard to find 'the man'," he explains. "You can get up and sing for two hours with anybody but, during the other 22 hours of the day, it may be hard to live with that person. We've always sought not necessarily the most talented person out there - although I feel these guys are amongst the best there is - but the biggest thing is that we get people who like one another and get along together. We see groups come and go that have extreme talent but don't have the bond between the men and it just doesn't last. We're really blessed - God has sent us the right guys through the years and we've been very fortunate."

"One of the key things is that we love what we do," enthuses Gus. "Scott Howard always says we sing for free but we haul gear for a living. That is the absolute truth. When we step on stage, we're doing what we love to do and it shows. People are attracted to that."

I suggest that it must have been tough for Legacy Five to continue after the death of co-founder Roger Bennett in 2007. "There was a two or three year period when Roger was so sick that we never knew from week to week if he would be there," Scott Howard admits. "It was hard to prepare and a lot of that fell on Scott Fowler because he never knew if he was going to have to be the guy out front carrying everything. At the time, I thought it was awful because the people who were coming along to see us didn't know if they were going to be seeing Roger or not. In retrospect, I think God used that time as a buffer period for people to get used to Roger not being there and that's not to diminish the fact that Roger was a huge part of Legacy Five. In fact, I didn't know if we'd be able to continue doing what we were doing without him but, with God's help, we got through the transition."

"I looked at it from every angle - before Roger left, during his illness and after he was gone - and I tried to anticipate what would or wouldn't come our way as a result of his passing," advises Scott Fowler, the memory of his close friend's departure still very fresh. "However, none of the things I feared would happen actually came about. It taught me that, if we were just doing this because we wanted to do it and because it was fun and enjoyable to us, it wouldn't have survived. In addition, I learnt that, for at least this season of our lives, this is what God has for us and that he provides and makes it happen."

Continues Scott Fowler, "There are a couple of simple little lines that I truly try to live my life by. One of them comes from (American Christian speaker) Charles Stanley who says 'be obedient to God and leave all the consequences to him' and that really is liberating if you can do that. Put simply, he'll provide what you need if you're doing what he's asked you to do. All that is to say is that, through the whole Roger ordeal, God provided and he made a way when it seemed like there was not going to be one."

With subsequent years seeing the group build upon the firm foundations laid by Bennett and his co-founders, Scott Howard sums up the secret of Legacy Five's ever-increasing success and the attraction of Southern gospel music as a whole: "Even if you take the message out of it, Southern gospel is fun music and people love it but to interweave the Gospel message through it makes it all the more appealing. We can never claim to be cool - although the kids who come along to our shows really enjoy it - but this kind of music is timeless. There is obviously an attraction to Southern gospel over here in the UK. I guess everyone likes hearing the truth in a fun style of music."

Backed up by the reception Legacy Five received at the Revival Festival of Music, Scott Fowler has the last word. "We just tell people wherever we sing that we're going to have fun and we hope that they will too."