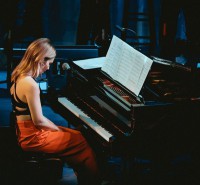 Singer/songwriter Lily Williams' blend of folk and pop is delightfully sweet. Her deeply evocative lyricism and engaging vocal melodies are pulling in listeners with her radio hit "Maybe". The UK-born, USA-based songstress told Cross Rhythms Plymouth how she came to write her radio hit.

"'Maybe' is a true story about the first relationship I was in. We were really young, we were 18. And we were trying to follow God together and love each other. But with it being the first relationship for both of us, the way you love, trying it out for the first time, it feels like you're driving in the dark," she said. "We definitely both made some mistakes, even though we loved each other so much. But in the end I felt this peace that it wasn't the right thing for both of us. There were moments of great joy and moments of great sadness, spring will come again although this is ending and dying, I know there's going to be something beautiful that comes out of this. I wanted to write about it and tell the story of the relationship from my own perspective and through my own eyes. I know our love was so real and genuine for each other even though it couldn't last. We loved each other as best we could through that time. It took a bit of time but when it came out of me it came almost all in one go. It was so real to me, the story, and so close to me."

The power of music is unrivalled in its ability to connect with a listener, allowing them to experience the full scale of emotions; from bitter sadness to blissful joy and everything in-between. Lily Williams understands this all too well, as her drive to express emotion acts as a linchpin for her sound. "When I was 10 my godfather passed away; I was very close to him. And I wrote a song about it. I remember that to be the first time I ever wrote a song as a way of expressing what I was feeling," Williams recalled back to when she wrote her first song. "And from that moment on I started writing songs, mostly in response to how I was feeling, although I would write sometimes about specific things if someone asked me to write. So, since that moment on I have been writing songs and I haven't stopped."

Lily continued, "I grew up in an amazing household. My mum and dad are Christians. I've three siblings and we all grew up going to church and learning about the love of Jesus." Music was very important to Lily, even as a child. "I started playing piano and having clarinet lessons when I was about five because mum forced us all to play musical instruments. We were really young. There were times when I really did not like her for making me carry on with piano but now I'm eternally grateful." 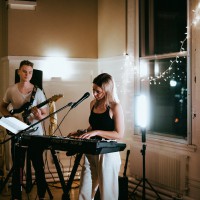 Although Lily has always pursued a drive for creating music from a young age, it wasn't until she hit 18 where she truly found the love of Jesus for herself and the spiritual lights came on. "I originally went off to Youth With A Mission in Australia thinking it was going to be fun; I'd be travelling around and I'll just do this missionary thing, not on the side, but I saw it as a way to be in Australia. The moment I got to the YWAM base I was so overwhelmed with love. I completely fell in love with Jesus through reading his word and worshipping him. Seeking after him, he became so present to me and so real to me. When you see something for real, you can't ever say that you didn't see it and I so evidently saw Jesus in that time that I knew from that moment there was no going back. It's the realest thing now. That was probably the best experience of my life."

With her conversion, Lily began to write more and more songs and by the time she was attending college in Boston, she was releasing some singles. In 2017 she had released an EP 'Still The Noise'. A year later a song from that project, "Dear Friends Of Mine" was rather surprisingly transformed into a dance-orientated track by producer Kleak. "I was approached by producer Kleak who is currently studying at NYU. He loved the song and asked if he could remix it and I agreed," explained Lily. In May this year, Lily released the single "Maybe" and amazingly, considering the thousands of tracks sent to Cross Rhythms for possible airplay by a myriad of independent artists, was identified as something special.

Now Lily has followed through with another single, "I've Been Thinking". Throw in a graduation from the prestigious Berklee College of Music in Boston, Massachusetts into the mix and it's been quite the whirlwind adventure for Lily Williams.

For the foreseeable future, Lily will drive on with her intertwining relationship with faith and music. Big success or not, that remains to be seen, but it's comforting that all of her drive in creating music is for the Lord Almighty. "I always want my music to be glorifying God first and foremost. Worshipping through music is one of my favourite things to do ever, I just feel like so much freedom comes through worship and through singing your heart out to God. I'm playing to an audience of one. I like singing to an audience of one. Everything we do on this earth is for God rather than for man. It's for loving God and for loving people around us."