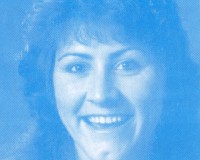 One of the rising talents of grassroots CCM in the UK is a lady singer, songwriter and full-time nurse from Plymouth, Linda Edwards. Her recent song "Jesus, Source Of All Beginnings" was a big UCB Europe favourite this spring, and she's also been involved in the Teen Challenge UK Millennium Project.

Born and brought up in Plymouth, Linda comes from a staunch Pentecostal church background. "Both my parents are Christians, my father in fact has not long ago retired as a minister in the Elim Church - my grandparents were also believers, so it's a strong Christian background, and I gave my heart to the Lord when I was seven; not too long ago, of course!" Her singing career began at about the same time. "Mainly Sunday school events and things like that, following in the footsteps of my mum, who'd been involved in quite a popular singing trio called The Gospelaires - they even made a few records."

Trevor: So, how did Linda discover she could write a song?
Linda: "I think it was probably in my school years -1 began to write poetry when I was about 12, so I was into words before I was into music. I joined up with a friend of mine, who I'd grown up with, Dave Wellington, and we'd sing together, go round various churches together - and started gradually adding the music to the words; we began writing songs together when I was about 15, and then gradually I branched out on my own as a singer and songwriter."
And part of her early experience was when she found herself on stage at, of all places, the Royal Albert Hall. "We had a visiting minister at our church, and I was asked to sing. I chose the hymn 'Abide With Me'. A lot of people thought that it wasn't appropriate, being associated as it is with the FA Cup Final, but I wanted to sing it because a lot of hymns have been taken over as anthems, mainly because of the music, and the words are forgotten. The words of 'Abide With Me' are absolutely outstanding, and it became a favourite of mine at that time, even though I was only a teenager. It meant a lot to me mainly because of my love for the Lord, and the words really spoke to me. The visiting minister was the chap who was responsible for arranging the music for the Easter service event at the Royal Albert Hall, and he asked me if I'd sing it on the Easter Monday. I was very glad, very honoured to be asked to do it, it was a privileged situation to be in."

Having spent several years on the church music circuit, Linda and Dave decided (like most singer/songwriters before and since) that they'd like to make an album for posterity. The result in 1992, a cassette album 'On Eagle's Wings'. "At that time, I was singing other people's stuff, lots of hymns, and people were asking me if any of the songs I did were on tape. I didn't think very much of it at the time, I didn't think it would have very much impact, it was really just for friends and family. I thought at the time, 'Yes, I can commit myself to this, I just hope I don't end up in debt.' It sounds dreadful; I had such a lack of faith! Well, the first day it went on sale, it just sold out, I was absolutely astounded. And then I started seriously looking at what the Lord wanted me to do, and how I was to apply the gift that he'd given me, and move a little bit further on. I had such short expectations - the Lord obviously had a lot more in store for me - I'd limited myself and looked at my own abilities, and I'd forgotten that God has vast ability and that I was to rely on him, and on what he had in store for me."

Despite the success of her first tape, Linda never considered going full time, preferring to keep the day job. She confessed with a certain amount of amusement that it was probably basic insecurity! More recordings came: two tape albums in 1995 'Before Your Throne' and 1997 'Dreams Of Heaven'. But it was Linda's 'Behind The Night' that brought her to the attentions of a national radio listenership when the song "Jesus, Source Of All Beginnings" became a turntable hit on UCB Europe. I asked Linda about the song.

One of the signs that a songwriter has "arrived", so to speak, is when other people start doing cover versions. "I'm very encouraged! Teen Challenge UK took one of my songs 'Clothed In Your Holiness' in January for the second volume of their 'Forever Jesus' series, the title of which was 'Holiness' (very appropriately), and it's raising funds for the Pentecostal Churches' Millennium Project, the drug rehab unit in Yorkshire. So I was thrilled to be involved in that. I went up to Swansea to do the recording and the team was very enthusiastic, their values and their standards were very, very high. It's very encouraging in Christian music to see high standards like that."

Trevor: I wondered how she'd become involved with Teen Challenge in the first place. Did I detect the hand of her long-time friend and songwriting pal Dave Wellington, who's also on the Teen Challenge albums?
Linda: "I'm not sure how it came about; they'd asked Dave if they could use some of his songs, and they wanted to know who else had been singing his music. It happened to have been me singing on Dave's album, so that was one reason they wanted me to sing lead vocals. Then they asked if I'd got any music as well, so obviously, I just sent them my albums!" "Isn't He Good", from 'Forever Jesus II' has now joined "Jesus, Source Of All beginnings" on the UCB Europe playlist!

Trevor: So what's next for this multi-talented lady?
Linda: "I'm busy writing songs for a new album, three done already, another two half finished. That'll be due out sometime next year. I'm also going to be involved in a tent campaign in Plymouth this year with Elim evangelist Marilyn Harry. We're looking to the Lord to do great things - people finding salvation, people coming to the Lord to recommit their lives - so that's going to be an exciting time. And whatever else comes along, I'm always ready and open to whatever opportunities the Lord brings along to me. There's a chance of a Cornwall tour at the end of the summer, but that's still to be arranged."

Trevor: In all her activities, her constant companion-cum-roadie is her husband, Martin - but he's got a full time job as well. I asked Linda, how does he manage?
Linda: "Well, he's an engineer - not a sound engineer, unfortunately - but he's not un-sound either! No, he's incredibly supportive of what I do, even though with the shifts we work, it's sometimes like ships passing in the night, but sometimes it works to our advantage -the Lord brought us together for a purpose, and the Lord has got us in hand, definitely!"

I just heard such a fab song on UCB radio by Linda Edwards called 'Isn't He Good' and was wondering firstly where I could purchase this Forever Jesus II album from? Also, will there be lyrics & chords to download for this song?