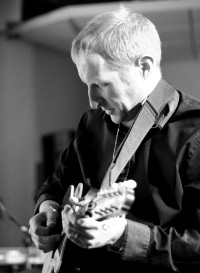 The Scottish singer/songwriter connected with Tunesmiths online songwriting collective in 2012 and such was the result of his efforts that his 'The Secret Diary Of A Tunesmith' album gained considerable interest, Cross Rhythms commenting, "The whole thing, though scattershot, is imaginative, creative and definitely worth checking out. . ." Now Honeyman has returned after another exercise in cultural eclecticism and 'The Secret Diary Of A Tunesmith Vol 2' is about to be released. Here is his song-by-song rundown.

"Home Someday Very Soon"
To meet the Tunesmiths challenge of creating a piece using only percussion and voice, I chose to revisit my 2013 gospel blues single "Home Someday Very Soon" to give an alternative take on the song. The recording process started off at drummer Jon Assheton's house as he beat out a 4/4 rhythm on cajon. After looping Jon's cajon track, I then added as many percussive sounds as possible before putting the vocal on. My son Sam beat boxed on the last half of the song for good measure.
Lins Honeyman: vocals, cabassa, claves, one shots, triangle, cow bell, tambourine, shaker, drumsticks, spoons
Jon Assheton: cajon
Sam Honeyman: beat boxing

"The House"
The brief for this track was to create a spooky piece of music. This particular piece touches on the avant garde and uses a fictional dilapidated house as its setting. Starting with a knock on the door of the deserted building, the curiosity of a passer-by gets the better of him and he enters a world of disturbing noises, strange goings on and non-corporeal happenings before a chase scene leads him to a basement where something not quite of this world and very probably alien is imprisoned and connected up to a mass of tangled wires and cobbled together electronic equipment. Is the being in the basement the cause of the strange goings on upstairs and does everyone get out alive?

This piece uses a variety of objects including a creaking door, singing wine glasses, a cutlery drawer, a child's music box and ticking clocks to create the soundscape. Instruments used include keyboards and a bass guitar whilst an electric guitar piece makes a reappearance two decades after I recorded it on a humble four track recording machine. Also included in the melee is my brother Ross playing didgeridoo (recorded when I was out in Australia back in 2008) as well as birdsong, thunder and a "doctored" bass line from my version of the Doctor Who theme tune - all of which have featured in previous Tunesmiths outings.
Lins Honeyman: sound effects, keyboard, piano, cutlery, electric guitar (recorded in 1994), music box, wine glasses, bass, ticking clock
Ross Honeyman: didgeridoo (recorded in 2008)

"How Silently"
The Tunesmiths challenge for this song was to write and record a Christmas song and, having written a few festive tunes over the years, I wanted to come up with something that married the events of around 2000 years ago with the here and now with occasional fleeting references to melodies and lines from those amazing Christmas carols of old. Opting to keep things simple, I developed a piano part with each verse containing a different variation on the main theme and, if you listen carefully, you might hear hints of "O Come, O Come Emmanuel", "We Three Kings" and "O Little Town Of Bethlehem". The song was performed at my local church's Watch Night service in 2014 and has been played live on a number of other occasions when the season is right.
Lins Honeyman: vocals, piano

"Cruel Thirst"
This time I was asked t write and record a song with drinking water as its theme. Honing in on the issue of water shortage and thirst, I used an industrial-sounding drum loop and built a bass guitar sequence around it before adding layered keyboards and a Monotron solo. A track most definitely influenced by the electronic sounds of '80s music.
Lins Honeyman: vocals, bass, keyboards, Monotron

The spec for this challenge was to write and record an Indian piece. Not possessing a sitar, tabla or such like, it became clear that I would have to create an Eastern sound with the instruments I had at my disposal. As a result, my 6 and 12 string guitars were tuned to DADDAD to give a richer sound whilst I was able to make my dobro sound a bit like a sitar. My MIDI keyboard also provided the tabla percussion sounds and the nearest I could get to a sarangi at the end. In the middle section, I recycled the sound of waves at Broughty Ferry beach that I used in the first volume of Tunesmiths songs whilst my son Sam added the necessary drone sound on a homemade didgeridoo made out of plastic piping. The title means "Bharatiya Raga" which is Hindi for "Indian Melody".
Lins Honeyman: 6 & 12 string acoustic guitars, dobro, accordion, drum loop, Indian bells, chimes, synth
Sam Honeyman: homemade didgeridoo

". . .Dance"
The Tunesmiths brief for this piece was to write a dance track. The remit was fairly wide on this occasion and the dance track in question could be anything from techno to ballet or even a Romanian folk dance. I opted for the more electronic definition of dance music and, taking a classic club beat as my starting point, I built up a number of layers to add as much variety as possible. The "...." in the title reflects the spoken word sections which try to name as many dance-related words as possible (not all of them are actually dances!)
Lins Honeyman: synth, voice

"Oh Lonesome Heart"
Another fairly wide brief this time around with a waltz being the challenge for this composition. Naturally, I decided to write a country & western waltz based loosely around the words of the 42nd Psalm. After recording a basic drum 3/4 pattern on the kit in the music corner of our church, I then added acoustic guitar, bass, mandolin and accordion before giving it my very best hillbilly vocal.
Lins Honeyman: vocals, acoustic guitar, mandolin, accordion, bass, drums

"Positronic"
The next challenge was to compose something with a "space" theme - partly influenced by the release of The Martian which was at the cinemas at the time. With a nod to David Bowie - few artists have done "space" better - I decided to write a tale of unrequited love with a difference featuring the points of view of the astronaut and his adrift spaceship. Using my MIDI keyboard to create the drum loop, layered chords and various sci-fi sounds, I recorded my vocal before handing over to the on board computer to let her pick up the story.
Lins Honeyman: vocals, synth, drum loop
Cynthia Ettick: computer voice

"This Is What It's Not (A Christmas Rant)"
For the second time on this collection, the challenge of writing a Christmas song was suggested and, in contrast to "How Silently" which was written the previous year, I decided to go for something a bit more acerbic that decried the commercialism of the season. Designed to reflect the manic nature of what Christmas has become, the quickfire barrage of one note phrases is shouted out whilst a Monotron solo adds to the general mayhem.
Lins Honeyman: vocals, acoustic guitar, bass, drum loop, organ, Monotron, piccolo ukelele, whistling 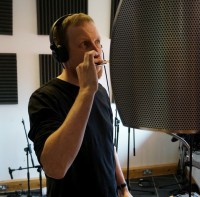 "Blues All Around"
The Tunesmiths challenge that brought about this piece was to use the La FolÃ­a chord sequence to write a song. La Folia was a major musical phenomenon of the baroque era and comprised a simple 16-bar chord sequence - seen by many as a forerunner of the 12-bar blues. With that in mind, I set some well-known blues sentiments to the La Folia chord structure to suggest that the blues were around before the blues were around. Starting off with a harpsichord sound, it then made sense to invite my wife Jill to play a stellar recorder solo to add to the overall baroque feel.
Lins Honeyman: vocals, keyboards, classical guitar, tambourine
Jill Honeyman: recorder

"What Would Blind Willie Think"
Following the deaths of major names such as David Bowie, Glenn Frey, Natalie Cole and Alan Rickman at the start of 2016, it was suggested that each Tunesmiths member write their own tribute to a late artist who has influenced them. This song pays tribute to one of my all-time musical heroes - the street singer and gospel bluesman Blind Willie Johnson. Blind Willie was a hugely important figure in the pre-war blues scene and was never recognised in his lifetime for the work he did - in fact, he was left to die in abject poverty. I usually do a Blind Willie Johnson song or two at most of my gigs and I've often wondered, if he were somehow to be in the same room, what Blind Willie would think of how we play his songs. This song poses that question whilst telling the story of his life. I also tried to include as many Blind Willie Johnson song titles or lyrics as possible - see if you can spot them! Also featured at the start are spoken word snippets from a handful of blues musicians who recorded exclusive excerpts for my weekly radio show The Gospel Blues Train on what different Blind Willie Johnson songs meant to them.
Lins Honeyman: vocals, acoustic guitars, bass, organ, piano

"Keep Talkin'"
Very much home territory for me, the challenge for this particular track was to record an original 12 bar blues song. I decided to head back into the mists of time and reinterpret a song I wrote in 1993 when I was 19. In reaction to a former school friend's tendency to never shut up for more than a couple of seconds at a time and to spout his suspect opinion all over the place whilst he was at it, this is a tongue in cheek ditty that reflected my silent thoughts at the time whilst I was trying to get a word in edgeways. 23 years later, he's probably still talking.
Lins Honeyman: vocals, banjo ukelele, acoustic guitar, electric piano, melodica, thumped door, box of colouring pens, foot tap

Release date: 4th April 2016
Download only from www.linshoneyman.bandcamp.com on a name your price basis.