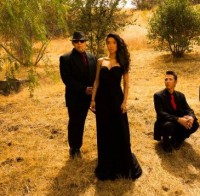 Gearing up for a soon-to-be-released third album, the career of Los Angeles-based gospel, blues and roots collective Little Faith continues to gather pace. Having secured the prestigious services of former Whitney Houston musical director Michael Baker to produce 'Eternity' - an album that continues the band's tradition of breathing new life into old gospel blues numbers and well known spirituals - and the scene is set for Little Faith to gain the recognition they deserve beyond the borders of their Southern California home city.

Boasting an ever-evolving line-up, Little Faith started out as a mostly instrumental outfit when Jack Maeby, an in-demand organ player and pianist who has played for the likes of Solomon Burke, Etta James and Carly Simon, put together a troupe of like-minded musicians to record the 2010 album 'Spirituals' which saw Maeby and guest musicians such as James King (baritone sax) and Leah Zeger (violin) do exactly what it said on the tin and reinterpret songs from the African-American spirituals canon.

In a move that would advance the sound of Little Faith, Maeby soon invited respected guitarist, singer and producer Ray Wolffe to join the band whilst Canadian singer Nadia Christine Duggin - backing vocalist of choice for stars such as Miley Cyrus, Natalie Cole and Avril Lavigne - began to perform live with the group. In 2012, the three, together with vocalists Steve Elowe and John Michael Knowles, lap steel player Nelson Blanton and Wilson Phillips drummer Jesper Kristensen, released the well-received 'Shelter' album as well as maintaining a live performance schedule that saw them ply their trade in church and secular venues alike as well as a number of festivals across the States.

Employing the services of crowd funding organisation Pledge Music to help complete and promote it, a sneak preview of Little Faith's upcoming new release 'Eternity' shows that it already has the hallmark of an album that promises big things from Little Faith. I caught up with singer Nadia Christine Duggin during her working holiday in Denmark to find out more.

"It's just in the final polishing phase right now," Nadia says of the new album. "We're hoping to have it released sometime in the fall. We've put a lot of work into it and it's developed over a long period of time. Michael Baker, who was Whitney Houston's musical director, jumped onto the project and that's been amazing. He came out to see us quite a while ago and he was really interested. He just wanted to check us out as a group and straight away he was really interested in taking us on. It's been really awesome because he's brought a fresh perspective to the Little Faith sound.

"Working with Michael was - no pun intended - a big leap of faith," Nadia continues. "Our ear is very inclined towards that roots sound and it was important for us to maintain that. I really believe that Michael has put a polish on our sound without taking Little Faith away from its core. We feel as though he's done exactly what we ourselves wanted to do which was keep close to our roots but open up our sound and expand it a little."

Not only lending his productions skills, Michael Baker also supplied the title track for the album - a song he had written for Whitney Houston to perform before her untimely death in 2012. "He wrote that song for Whitney so it was obviously a big deal to sing it," advises Nadia. "We had big shoes to fill in terms of the original plan for the song and I hope we've done it justice." 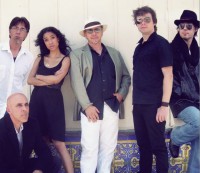 With each release, there is a sense that the members of Little Faith are keen for the group to develop both in terms of material and their overall sound. "That's really important to us," confirms Nadia before giving a potted history of the band's life so far. "Little Faith has been through a lot of different evolutionary phases. It started out as an instrumental group and slowly the vocals came in - first with John Michael Knowles, then with Ray Wolffe and then me. Jack's musical roots have always been in that gospel New Orleans jazz tradition and it's very important for us to keep connected to that whilst taking our sound in different directions. We want to make sure there's something for everybody but also maintain a common thread in the Little Faith sound and we hope that comes across."

Ever since Little Faith's debut outing back in 2010 where they set out their stall for reinterpreting well known spirituals, I ask Nadia why she thinks such songs have stood the test of time and are still being covered today. "In those kinds of songs, there is so much power in what they stand for," she suggests. "Take 'Wade In The Water' for example - it's a song about running from slavery so it's a very powerful message. It's not very complicated in a musical sense but it's so raw and it really speaks about the core of being human and what we go through as human beings. I think that's something we can all relate to in some degree. Perhaps the power of gospel music is that it can communicate something of what it means to be human - no matter what happens in life or how being a person on this planet changes. I think that's why it's important for us as a band to stay true to our blues and gospel roots - it's a kind of music that touches you right away."

It seems that old spirituals such "Wade In The Water" and "Rough Side Of The Mountain" - both recorded by Little Faith - have an ability to touch people regardless of their standing on matters church- and faith-related. "Not everyone in Little Faith comes from a Christian background," confesses Nadia. "I'm a very spiritual person but not a religious person. Ray, on the other hand, is very much rooted in the Christian faith. Either way, this music speaks to everybody and it touches your soul and I don't think you necessarily have to be a religious person in order to be touched by that. For me, when I open my mouth and sing those melodies and words that have stretched across the decades, it's most definitely a spiritual experience."

As a backing singer for major names including Miley Cyrus, Natalie Cole, Hilary Duff and Avril Lavigne as well as lending her voice to a number of TV and radio commercials in the US, Nadia is keen to point out how much singing with Little Faith means to her. "All those other gigs are jobs - I mean, they're wonderful to do and I really enjoy doing them but they're very much work," she clarifies. "For me, Little Faith is a place where I get to really explore my heart in a different way. I've learnt so much from doing back up in terms of blending and finding those harmonies and that has helped me with what I do in Little Faith.

"I've always connected to any music that is raw," she adds. "One of my all-time favourite singers is Otis Redding - he was just the epitome of a vocalist who unabashedly shows his heart in every single note that comes out of his mouth. That's the kind of thing I aim for when I'm singing with Little Faith and it's where I get to open up my heart and soul and let it all come out. It's such a powerful experience singing with Little Faith."

The experience seems to be no less powerful when Little Faith are on stage. "We're playing live as much as we can at the moment," advises Nadia. "We would like to start touring around the West Coast in the States and we would love to come to the UK to play live. I'm from Canada so I would like us to play there too. We know gospel and roots music is well-received internationally and it would be great if there was market for us with you guys in the UK."

In closing Nadia reveals the immediate plans for Little Faith: "We're going to see what we can do in terms of getting 'Eternity' out to as many people as we can. We're doing a campaign through Pledge Music and we're trying to raise money through them to get ourselves and our music out there more and to really connect with our audience. Los Angeles is great and it's where we're based but we feel there are so many other places in the US and in the wider world where we can connect with people through our music. Little Faith has changed a lot over a short space of time and, in order for us to find out where we're going next with it all, it has to come out of our experiences of connecting with different people."