Lou Fellingham: The British worshipper to release 'This Changes Everything' 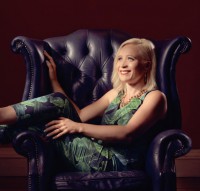 Following on from her many years fronting Phatfish, Lou Fellingham has established herself more recently as a highly accomplished solo artist and worship leader. After four studio projects Lou felt it was time to record a live album. 'This Changes Everything' is the result and I caught up with Lou the day after the live event/recording to find out all about it. I began by asking how she was feeling now it was over.

Lou: I'm feeling pretty exhausted I have to say, and good, and emotional. I'm like 'did that really happen yesterday?' but feeling really good. I had such an amazing team in front and behind me; it was like I had all my friends on board, playing in the band, doing sound and lights and all the other things involved in making it happen. I think the people that came really wanted to worship God which is a really great start point.

Clem: How do preparations for a live album differ from a studio one for you?

Lou: Quite a lot. With a studio album you normally record the songs and then piece it together afterwards. But with a live album you have to think about the whole evening - what's going to be said, the content, the 'moments'; a bit like you would prepare a worship set really. In our rehearsals we spent a lot of time working specifically on that element - flow between songs and where we might want to leave space. One of the things I love about the live context is you get to feed off people as you go, look people in the eye and connecting in a way that doesn't happen in a studio.

Clem: Now the live recording is 'in the can' what happens next?

Lou: We need to listen back to the recordings and piece the album together, decide finally on the order and 'clean up' any fumbles. Then it will be mixed and mastered in March and released in time for Spring Harvest in April.

Clem: A lot of new songs, a lot of co-writes; how does that process work for you as opposed to writing alone?

Lou: I really enjoy co-writing - it's fun! Two or three people is a really nice balance; fresh ideas, being able to bounce thoughts off each other, sharpen lyrics and melodies and pushing the songs to completion. For example, when writing "The Final Say" I had a theme based on Ephesians - the fact that Jesus has the final say over everything for now and for ever. Jake [Isaac] arrived with a melody and between him, Nathan [Fellingham] and myself, we wrote that song.

Everybody that you write with will bring something different to the table and also bring something different out of you. So I think it's always good to find people that you can connect with. I'm still growing and developing as a songwriter and often, I'll get a lyric and melody together but then that needs to be worked out and worked on. I put ideas into my iPhone and collect as I go along and then connect with Nath. Whilst I might have an idea of which chords I would like, he usually has better ones!

Clem: Which song (or songs) on the album do you think will be the 'stand out' ones for the Church?

Lou: It's always difficult to choose because I love them all. But it's wise to narrow it down! Spring Harvest is our first opportunity to play some of these so we've gone for "Everlasting Arms", an old hymn which we have re-worked; "How Great The Love Of Jesus", which has worked well already in congregational settings, and also "This Changes Everything" the title track. I'm excited about declaring [from the refrain] "Jesus is alive" and believing for this truth to resonate and have lasting impact in people's lives.

Clem: We've had different 'seasons' of songs over the years but as a worship leader and songwriter, what do you feel God wants to say to the Church as the moment?

Lou: Interesting question! I think one thing God has been teaching people about recently is trust; another is the need for unity but the key thing resonating with me is the Gospel - the power of the Gospel and not being afraid to share that and ask for a response. The Gospel is fundamental to our past, our present and our future. God is increasing my hunger and passion to share the Gospel and the longing to see people saved.

Clem: Are you planning to tour 'This Changes Everything'?

Lou: We have concerts in Inverness (17th) and Glasgow (18th). We're at Spring Harvest and Word Alive in April and also the CSW (Christian Solidarity Worldwide) conference at St Paul's Hammersmith (22nd). Next it's the Thy Kingdom Come events in June for Pentecost and we're currently booking tour dates for the rest of the year.

This article first appeared in the latest issue of Together magazine and is used with permission.

The opinions expressed in this article are not necessarily those held by Cross Rhythms. Any expressed views were accurate at the time of publishing but may or may not reflect the views of the individuals concerned at a later date.
About Clem Jackson