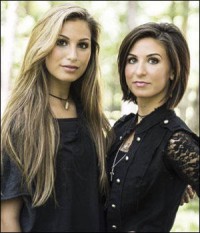 An album which has recently arrived at Cross Rhythms brimming over with radio friendly hooks and lyrics which are a bold statement of faith is 'Tired Of Basic' by pop rock girl duo LoveCollide. Having paid their dues with independent releases, Brooke and Lauren DeLeary have now delivered this slickly produced set. With The Fuel Music giving the set national distribution, the girls seem on the cusp of breaking through internationally. LoveCollide's Lauren spoke about the theme of their impressive new album.

"We like to think outside the box and challenge others not to live the basic life, but to step out into the unknown and live out the life that God has called them to." "That's the theme, that's the mission - an extraordinary life," Brooke added. "Living in a way where you can never be labelled, like Jesus. Starting revival by being the light, being different, showing who Jesus is through us."

The sister duo, originally from Hickory, North Carolina, have been singing together since their early teens, and growing up in a Christian home listened regularly to Christian radio. Said Brooke, "We both grew up believing in God. I honestly don't remember a time I didn't believe! I was 13 years old when I TRULY decided to not only believe but to become active in my faith. I was at a Life Action Family camp (a camp we've been to every year as a family) and I remember asking God to make the Bible real to me. Lauren, on the other hand, met God at an even earlier age. She got saved in Boone NC at a Franklin Graham conference when she was seven. She started reading her Bible on her own though when she was 11 after a True Love Waits event."

Continued Brooke, "Our parents weren't musical at all but quickly saw our calling. Lauren could sing at three and I started being obsessed with the drums and other instruments at three. From singing in the praise band, doing musical theatre, to playing original music in local coffee shops! Lauren and I started officially pushing music about eight years ago when Lauren moved to Nashville to attend Belmont University at 16 years old."

As The DeLearys Brooke and Lauren recorded and released an independent EP 'I'm Out'. By 2014, the girls had changed their name to LoveCollide and released a full length eponymous album. More recordings followed, a Christmas EP 'Fa La La Christmas' in 2015 and a second album 'Resonate: A Ripple To A Wave' in 2016.

As the years moved on, LoveCollide had the chance to tour across the US, have done modelling and film gigs and have shared the stage with some of Christian music's biggest names. They've also ministered in Canada.

In 2017 Lauren and Brooke began working on a new batch of songs, some of which were to form the backbone of 'Tired Of Basic'. The duo were able to call on the services of top producers Riley Friesen (Family Force 5, Group 1 Crew) and Matt Dally (Superchick, Jamie Grace). They spoke about a couple of the songs on the album. "'I Don't Want It' was our first song we wrote with our producers that worked on this album with us. It was such a fun experience and just our own personal prayer. As LoveCollide we were holding our career up to God and telling him that if he wasn't going to be a part of these next steps, then we didn't want any part of it. Really vulnerable. Really beautiful."

Continued Brooke, "Another song, 'Maybe', is our deepest, darkest fear put into a song. No real resolve, just a hope that God would hold on to us. Lauren and I have both been through our own struggles, times where we thought our dreams were over, times where we were betting all of our life and career on one single step and lost it. I went through a season of depression and Lauren went through a season of feeling like she was only meant to live semi-happy in her life and that's just the way it was going to be. This song was less of a prayer and more of a need. Sometimes we need God to hold on to us because we truly can't hang on anymore. That's where this song came from."

Lyrically, the themes of 'Tired Of Basic' pull from some seismic ups and downs of the past two years. Lauren, for one, dealt with the pain of having to break off an engagement. "I thought I was supposed to settle for that mediocre love, that my dreams for marrying my best friend and the love of my life were for someone else," she said. "I'd just given up in a sense, but God radically changed my life when I broke off that relationship. Then God gave me Adam." That's Adam Budnick, LoveCollide's drummer, and Lauren's fiancÃ©.

With The Fuel Music giving 'Tired Of Basic' national distribution, clearly LoveCollide are moving into a new season in their ministry. They are full of enthusiasm and faith about what might lay ahead of them. Said Brooke, "You can either live in fear or live in life. Fear will always be there but it's our choice to own it. God did not give us a spirit of fear but it can control the best of us if we let it."