Lovkn: From an Arizona desert home studio to an international listenership 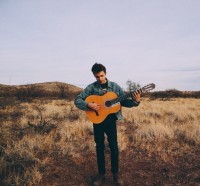 It's rather a romantic picture - a singer, songwriter and record producer spends day after day slaving away in a tiny studio, located in the furnace heat of the Arizona desert, and then sends his creations to an ever-growing legion of social media supporters. But that's exactly what Steven Lufkin, better known as Lovkn, has been doing, and he must be doing it pretty well as the delightful Cross Rhythms radio hit "Holy Rain" has now come forth from all that creative energy. I talked to Lovkn about his life in music ministry. It seemed appropriate to begin by asking him what the weather was like.

Lovkn: "It's like you're in an oven if you walk outside."

Tony: Were you born in Arizona?

Lovkn: "Yes, I was born and raised here."

Tony: You must have some very tough skin.

Lovkn: "Yes, that's true. We have some special skin down here."

Tony: I understand you spend weeks on end ensconced in the studio?

Lovkn: "The thing is it's too hot here to go outside. So I stay inside all day and write music. I have a little set up here in my house. Over the years I've trained myself to process life through song. That was not something that came necessarily naturally at first. Writing songs has always been a passion of mine, the idea of creating music and writing stuff out. It's been a journey but as I've thought about it and described it in recent years it's been the way I know best how to process life. And a big part of my life is my faith and Jesus and so I find myself writing a lot. I also feel that when we have a gift and we have something to write about, we have something that the Lord put on our hearts to create, sometimes it's for us to keep between him and ourselves. But a lot of times I kind of feel it's not my job to keep it to myself. It's a gift and so we have to let it out, to release it. So I'm always releasing stuff."

Tony: But of course, with such vast amounts of music coming daily onto the internet, songwriter musicians could be making music which gets to very few people.

Lovkn: "That's true. Because it is such a level playing field, everybody has an opportunity to put something out and sometimes that means it's only going to reach so many people. But the beautiful thing that we get to remember is it's not even about how many people hear a particular song but it's more about the impact that the song might make on an individual. So if it's 25 people but it's completely radically changed their lives or it's bringing one of those people back into a hopeful place in their life then that is the prize. That's what makes recording and releasing music worth it.

"Committing yourself, pursuing your dream, pursuing art and music you have to be very in tune with what you believe the Lord is calling you to, individually. And only you can know that in your heart. I feel that if he is truly calling you to be making your music and releasing it then at that point, regardless of what you see - in the lack of funds available, for artists, especially nowadays when studios aren't even that big of a thing and the way you're making money is streaming - at that point you have to believe and trust in what God is calling you to and also trust that he's your provider and he's going to make a way."

Tony: But may not necessarily directly through the ministry of music. Paul of Tarsus, he had a tent-making work which supported his staff. Do you have any financial support?

Lovkn: "Yeah, lately it has come from a few different streams. One of the things that I do when I'm back in Phoenix and I'm not out or travelling or playing my music on a ministry trip, I build furniture. I work for a small business and we build furniture. I've been doing that for the last few years alongside of the music and that's just a job. Actually I feel that it's the trade the Lord started in my life so I'm really thankful for that. I have that though obviously my dream is still to be able to graduate from that and make music the full time thing. It's not always fun being out there in the heat of the day labouring away on wood."

Tony: As well as all your singles, you've also managed to release a couple of full-length albums, I think. 'I Will Not Refrain' in 2018 and another one in 2018, 'Into Freedom', which there seems to be two versions of, a standard one and a bonus track version. Were those collections of recordings you made over the previous year?

Very nice
We are very proud of you