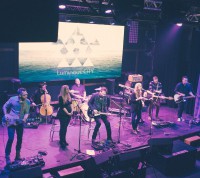 Most worship albums are unlikely to feature heavily on the Cross Rhythms radio playlist and those that do will usually only find an airing on CR's regular worship programmes Verticality. One recent release though has bucked that trend, the eponymous Luminous City album, with three tracks being chosen for major radio exposure and one of them, "Your Love Moves", reaching number two on the Cross Rhythms Chart. Luminous City is a collective of musicians and songwriters linked to an Anglican parish in Nashville called Luminous Parish. The founder of this radical initiative is a veteran singer, songwriter and worship leader, Chad Jarnigan. Chad has an impressive CV. From 2000 to 2006 Chad, from Cincinnati, Ohio, was the frontman for the rock worship band Among Thorns; was a Dove Award nominee in 2004; and was once the vocal performance coach for Paramore.

But Chad's big passion has been worship ministry and has worked on staff with churches in Tennessee for the last 14 years. In 2011 Chad released an eponymous solo EP. Before he spoke about Luminous City I asked this experienced veteran to tell me about the EP. He explained, "The guys that formed Paramore with Hayley Williams, Josh and Zac Farro, were in our student ministry for a while, several years back, before Paramore become a band. When they left to do that, we kept in touch. One of the brothers, Josh, is a great songwriter and when he and his brother left, Josh and I got together. I brought this song to him called 'Leanne'. I said, 'This is a song I wrote about my sister. She was struggling from addiction and passed away.' He helped me finish that song, and we released it on the EP. The EP took off in Brazil and they wanted me to come down and play with some really large bands. But it never worked out: that's not part of what I've had time to do over the last few years."

Now Chad is developing Luminous Parish. The story really began with the Rolling Hills Community Church where Chad found that there were an extraordinary number of talented musicians, singers and songwriters. Chad explained, "All of us, individually, were travelling, or have travelled, and made records or had publishing deals. We had a heart for what Nashville is and what Nashville is going to become. We believe that more and more Nashville should be about making really good art. Our inspiration obviously comes from trusting and following the Lord, and in that there's quite a diversity in who's been a part of that with the church: we come from different backgrounds - a melting pot. We began to get together and to write, then the songs on 'LuminousCity' started taking shape. As we looked at each one day we said, 'I think we need to make an album'. We began there. Rolling Hills gave us the opportunity to be together in a community, write and create things. Now we've moved on and began to plant an Anglican parish here in the Nashville area."

One thing that sets Luminous City apart from many worship projects marketed by the CCM industry is a strong commitment to true creativity. Commented Chad, "Great music is great music, and our inspiration of where our faith comes from. We hopefully can translate that into lyrical content, whether it be overtly worship music or a thoughtful song that tells a story full of allegory and metaphor. I remember when I used to tour with my old band, that we were in all of the Christian bookstores: 'If you like Vertical Horizon or Coldplay, you'll like this band'. For most of us, we would always want to make sure that we challenge ourselves to not just be a mediocre version of something that's mainstream. We want to make sure we're pushing the envelope and saying, 'This is some of the best music, period - not just secular/mainstream or CCM'." 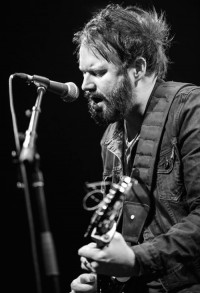 Alongside Chad Jarnigan two of the core members are Cody Bender, best known for his work with VOTA, and David Gross. Enthused Chad, "Cody Bender is one of the main guitarists, and he brings such a distinctive sound to what he plays. He's a really good songwriter - he's actually a great vocalist as well though his voice wasn't featured on the album. David Gross played the bass and some keyboards on the project."

Two of the tracks getting Cross Rhythms airplay, "Your Love Moves" and "Psalm 23", feature one of the most distinctive voices on the whole Nashville scene, Lanae Hale - a name Cross Rhythms radio listeners may recognise for her turntable hits "Start Over" and "Here's My Heart". But possibly the most passionate and original "song" featuring little more than a repeated phrase over an ever-building arrangement is "Stand Tall" sung by Chad himself. Chad was anxious to emphasise though that the exact lineup of Luminous City was fluid and already three are some new singer/songwriters coming through for the next album. He said, "It's really exciting because we never sought out to say, 'Let's go out and get him and her'. It has all happened very organically, relationally: we're seeing each other in church, practising together. It's part of our community here - this little borough of Franklin, Tennessee where a lot of Christian music has settled, a lot of industry is represented. That's part of the culture, we're so collaborative we look at each other and say, 'I love that song you wrote: let's get together'. A lot of that culture will be represented on new music we do as well. Rather than feeling isolated doing our own thing, some people can jump in and make an album that represents their heart for worship."

Chad continued, "We like to allow space for people to let the bridge be in the background of something, or just swim with us, and sing along when we get to those choruses. We think that the space in the music makes it a bit more contextual with our culture; that's who we are, and that's our influences - everything from Sigur RÃ³s to a band named Hammock here in Nashville, as well as Elbow and some of the other UK influences. We allow for that convergence of sing-ability, and then space and sonic texture so that people will actually enjoy the sound we're creating because we feel it's coming from an artistic place as well."

Following on from the album's release has come the surprising release of an instrumental version of some of the tracks. Explained Chad, "We felt the album hinted at a lot of space - just to be a soundtrack in someone's home, in the background of a sanctuary. Some of our group of people we fellowship with here, we believe there needs to be a more thoughtful, intentional space in the music that creates a mood without lyrics taking the narrative. We allow the cinematic sound of what can come from something beautiful like a piece of music without lyrics. That should belong in the church as well, and not just the background of a film. We would like to do that. When we began, I was sitting in the studio and listening to some of this music; we took the vocals out for a moment, and when they put them back in I said, 'Hold on. Keep playing that, but take the vocals out again.' Some of the guitar parts and the cellos and keyboards were so meaningful to me - I could hear the movements on the frets, the changes in the sounds - I wanted us to be able to release that without the vocals. So we remixed it a little bit to enhance some of the music that's there and it's been released as ''LuminousCity (Instrumental)'. Interestingly enough, there's been more movement on iTunes than we anticipated. It's paid off, and we hope that it provides some beautiful texture for anyone that listens to it."

I love the music guys, but where can I find your albums, I looked everywhere but can't find any songs. I heard only one song of yours and I must hear more. This story of how luminous city was formed is very interesting. Thank you 😊