Lyrycyst: The Missouri-based rapper pulling the mask off the face of America

The smouldering anti-abortion rap "What If I" by Lyrycyst is currently pushing the Missouri-based hip-hop man to national, and through Cross Rhythms airplay, international attention. "What If I" with an effecting contribution from Dove Award winning guest singer Rachael Lampa is just one of many stunning tracks on Lyrycyst's recently released 'Masquerade: The Face Of America' album. Other cuts set to light up the airwaves in the months ahead include his no-holds-barred critique of the entertainment industry "Showbiz", the Linkin Park-esque "Need To Be Loved" and "Today", a mash-up of eclectic instrumentation around the message of shedding the shame of your past.

Lyrycyst, born Steven Cooper on the outskirts of Kansas City, Missouri, knows all about the latter. Steven was raised by his 15 year old single mother. After having two more children, his mother found herself trapped in an abusive marriage which eventually escalated out of control, often leaving the kids to watch the violence in disbelief. After leaving the relationship, the family was forced on the run, living out of hotel rooms, safe houses and even their family vehicle, as the ex-husband searched to find them. With an eighth grade education and very little money to put food on the table, Lyrycyst's mother was forced to become a strip-dancer to pay the bills. The party atmosphere quickly led to a drug addiction, which continually grew to a $2,000 a week habit and sent the rest of the family on a downward spiral of depression, violence and heartbreak.

However, the road to recovery for the entire family would soon be in sight thanks to one of Lyrycyst's old classmates and former party buddies, who stepped out on a limb and invited him to church. After hearing the name of Jesus for the very first time, 18 year old Steven Cooper made a commitment to follow what he had heard and in one year saw his entire family radically changed as they all made the same decision. It was during this time that Lyrycyst dove head first into his passion for music and watched as his dreams unfolded before his eyes.

In an interview with broadcaster and journalist Mike Rimmer, Lyrycyst explained how he first connected with hip-hop music. "I had a lot of friends in high school - black guys who were really into the hip-hop crowd. They always used to criticise me because I was white and said I could never take this upon myself to become a rapper. It was really me trying to prove them wrong and live up to what they were doing that got me started to be like, 'Well, it shouldn't have to do with colour or race. If I write good music, if I make good music and if I have a message behind it then my race shouldn't matter.'" Lyrycyst discovered his lyrical talent when he spontaneously joined in with his freestyling high school mates at a party one night. "I always had that insecurity when you, like, know you're a white guy and they'll never take you seriously," he said. "So I was like, 'You know what, I'm just going to do it.' I stepped up and I just battled all of them and tore them all apart. They were all just jaws to the floor like 'what just happened?' And it gave me encouragement and confidence. All that stuff about being white just went away that night because I had some creditability by what I was saying and so that's where I got my title Lyrycyst, because it is all about the words. It's like, pay attention to the words I'm saying and not to my colour." 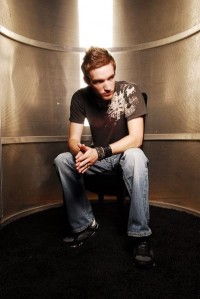 The guy knows he has talent but he's taken it all the way to a full time career, uprooting his life and his wife to tour the States. "I have been doing this full time for the past three years actually. And it has been rough. Don't let it fool you, it's not all glitz and glamour. The Christian music industry is a hard industry to be in. But it's worth it. The response I see, the impact I know, I can honestly say that everyday I am trying my hardest to make the most of it and make an impact on other people's lives. That's a thing that other people are so concerned with: getting financially wealthy first and then doing it. Well, that doesn't ever really happen; you can never get enough, you constantly go. We make our sacrifices but, to me, I was born for this, this is what I love to do."

Gigging wherever he could, Lyrycyst released two albums, 'Revolution' and 'American Dream', the latter featuring many of the songs which in a new and improved form were to feature on the nationally released 'Masquerade'. One of the things about Lyrycyst's raps are they are bold and direct but never preachy or judgmental. As he said, "The cool thing is that I'm just carrying my story. I'm just carrying my life experiences, what I see. I try not to go out and make music that points fingers at people and says, 'You're doing wrong.' For example, 'What If I' is about abortion and even that song is great because its not out to say 'You're wrong because you had abortions' and 'You're right because you didn't'. It's, 'Hey this is my story, listen to my life, take what you will from it and learn from my experiences.'" Lyrycyst's own mother was planning to have an abortion but changed her mind about at the last minute. The fact that he was almost never born has an obvious impact where he stands on the issue now. He said, "In society's views, in her circumstances, she had every right in the world not to have me. She even went in for the abortion, she set it up, she went in on the day she was supposed to get it, and she just knew inside of her that it was completely wrong. She wasn't a believer but she just knew. She had a panic attack at the office and the minute the doctor came in she was like, 'I can't do this, I'm out of here.' I just think if mum had made that choice 23 years ago then this would never be happening. I would never be sitting here with you. Who knows where I could go with my music from here on out? So who knows what some of these children, who were victims of abortion, could have amounted to?"

There are many other topics that are close to the rapper's heart including the widespread Church in the US. In "Get Along" Lyrycyst tackles the disunity he sees among Christians head on and does it with some crazy rapping. "It's is a fun song, it's one of the more upbeat ones on the album. But it's a spin off of the way we are right now, especially here in America. There is a divide among the churches and disunity among the people. 96 per cent of America claim to be Christian yet no one is in unity here. And so I plan on trying my best to do whatever I can to fix that by making music like 'Get Along'."

The idea of the American dream has always been picked at for its irony. It's the ideal of the solid happy family life, enjoying a white-picket-fenced home, with a regular income and the world as your oyster. But, as we all know, life for many, if not everyone, is a lot less sweet. Lyrycyst said, "As a country that's what we promote, that's what we consider success, that's what's on all the advertising: 'Come to America, make your dreams come true.' We never talk about the dark side of what's going on here; we try to sweep everything under the rug and act like it's okay. It's not. And unless we deal with those issues and unless we deal with the poverty, the drugs, the violence, the corruption of the Church, unless someone steps up and acknowledges that it's real and we're fighting a war here then we can never live a good life. We're always going to be dealing with these issues and trying to sweep it under the rug. Honestly, I just want to do my best to do what I can to take care of these issues so I can sit back and say, 'Okay, let's enjoy life now that everyone can enjoy it with me.'"

Lyrycyst has been very encouraged by the response to 'Masquerade'. "It's been unbelievable. We haven't had a single review that's been bad. Every review that's come into us that we've seen has been just perfect ratings and people have been raving about the album. The music on it is something fresh, it's something brand new, it's a style that's really untouched and it mixes in a lot of elements from different things. So, people not only are raving about the music but they see the message, they know what I'm trying to accomplish and they're on board."

Wow, what an encouraging and powerful story! I love the song "What if I" and I feel like that song has the power to change minds about the whole controversial topic of abortion, it puts life in perspective when he admits that "that girl was my mom and that child was me"