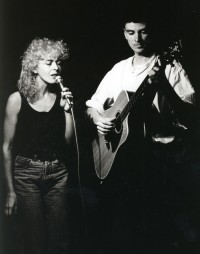 Compared with some of the dinosaurs still lumbering around Britain's church hall circuit, Maggi Dawn is a fresh young newcomer. Yet in the five years she's been out there gigging she's experienced her fair share of creative pushing and pummelling, being presented first as a performer of rather anaemic pop gospel then as a praise and worship leader and songwriter.

It's only now that Maggi has had the confidence to embrace her first musical love - as a sensitive, introspective singer/songwriter with acoustic accompaniment. And it's only now that the real Maggi Dawn is at last emerging from the plastic moulds made for her by a well meaning yet mistaken Christian subculture. Her point of crisis came in the lucrative but for Maggi, creatively stifling world of worship leading.

"I was so, so frustrated," remembers Maggi. "I went to see somebody I know who manages a band whom I was I friends with and I said to him 'I'm so cheesed off with the whole Christian scene, you know I really hate it and I don't know what to do. I'm actually at the danger point of getting cheesed off with God and before that happens I need to do something, but I don't know all I want to do is go back to singing which is what I started doing when I was 14."

"And he just sat back in his chair and said, "Well, what is really the biggest dream in your heart? Disregarding God, disregarding anything you think God has said to you, what's your dream?" And I said, "I really just want to sing to people and make them feel good, singing good music." And he said, "That is what God wants you to do and that's what you must do. I would advise you not to take any more worship gigs and back off completely and if you have to go and deliver milk or newspapers or type letters to support that, just do what you really want to do."

This is precisely what Maggi and her recently acquired husband Andy are now doing. Playing gigs like The Mean Fiddler she's taken a significant sideways step from the Bible weeks and Christian jamborees and in doing so has rediscovered her love of acoustic music.

"We tend to call it acoustic music rather than folk simply because folk has this image of long flowery skirts and little wooly hats and the finger in the ear...If it's possible to give it a new image I don't know. What we are doing is actually leagues away from that, but what we have in common with that is that we use acoustic instruments and purely the skills of our voice and our hands to make music, rather than a whole rack of effects and a lot of megahertz of noise." In many ways Maggi's 'back to acoustic' move completes a cycle.

Born in Sheffield her mother and father had bought her a guitar. "They didn't complain too much when I practiced and made some gruesome noises trying to learn it. I was about five or six. We had a teacher at school who played folk guitar and I just fell in love with it so he taught me to play. When I was 13 I joined a local band that used to play around clubs and stuff. Mostly folk clubs, and private parties, and things like that. So that was good and at the same time as that I started doing classical music so that was really useful actually, I learnt double bass and piano."

Maggi had become a Christian at the age of 11. "I heard the gospel at school one lunchtime and I thought yep, that's good, I'll go for that." After leaving school she drifted into various jobs before living in Norway where in 1983 she found herself working as a youth pastor in a church 100 miles below the arctic circle. Singing a lot in Church when she returned to Britain she recorded her first album in 1985. "A friend put me in touch with Les Moir who I employed to produce my first album, which I did by financing it myself, 'Magnificent King' which looking back was probably not." In 1987 she recorded another album with Les, but this one was financed by Kingsway Records. 'No Pretending' was better than its predecessor but it had its own problems.

"The album was recorded when acoustic guitar was absolutely passe and so what Les was trying to do was find a way of presenting my songs that did not sound like Joni Mitchell, or Joan Baez, kind of passe, but sounded like something 80s. But we found that meant compromising all the time because if you take something that's based around an acoustic guitar and add a load of synthesizers you end up with something really middle of the road."

Maggi's praise and worship compositions had begun to get recorded. Then came invitations to lead worship. Maggi still remembers the approach from Spring Harvest. "When the offered contract came through the post I was very skint. It said 'We will pay you this' and it was the only job I was offered at the time, I'm not praising God and waiting for royalties, but most Christian musicians I know struggle for a living and a lot of them will take jobs that are not their ideal because they are just too skint to turn them down. That's just a hard fact. So I took the job on.

"About that time, a lot of people who up until then had been influences in my life, and people who cared about me a great deal, all felt that I had a gift for leading worship. One lady said to me recently, 'You really ought to be leading worship because when you do it people meet with God'. And all these are very, on the surface, convincing reasons why I should be a worship leader. Yet all the time I was doing it, inside I was thinking 'I don't want to be here, this is not me, I don't feel right in this slot'."

When Maggi made the radical and courageous break away from leading praise and worship gigs she did a lot of concerts with members of Treasure Park (now sadly defunct). But it was meeting up with Andy Cross who'd previously worked with artists like Jacquie Hall and Tough Tribe that things really clicked. Andy remembers: "I first saw her when a friend took me up to the Mean Fiddler in London to see her, a mutual friend. That was about April last year. I was very impressed. I'd never been that enthusiastic an acoustic guitar fan. I think I just about owned one at the time but that's about as far as it went. I tend to think putting an acoustic guitar in people's hands brings out the worst in terms of bedsit introspection and the support act confirmed my worst fears.

"When Maggi and Stuart, the guitarist, came on I was very impressed with the quality of the songs and the lack of introspection and the good guitar playing. Out of the blue, a month and a half later Maggi phoned me up and said she needed a guitarist and from Jacquie she'd learned that I was okay, could play more than three chords, so I auditioned and that was it."

The couple got on like a house on fire and married while working in Australia earlier this year. The husband and wife duo have just completed their first album 'Bitter Sweet' self financed, recorded live at 'Holy Joe's' in Brixton and the 'River' tent at Greenbelt and abounding in all the cutting edge and unpolemical literacy the Christian subculture had once tried to expunge.

"The song 'Bitter Sweet' I wrote sitting at the kitchen table, I had the tune in my head, I could just hear the guitar riff I wanted. Like Andy said, you can get introspective with an acoustic guitar, singing about your blues and your problems and everything else. A lot of what I am writing is actually fiction, fiction in the real sense of the word, it's constructed of things that have struck me, little bits and pieces I have picked up from my experience of life and other people's lives, but then put into stories in songs. So I write a song where I personify the person who's whingeing on about all these different things but it's not actually me who's had that particular experience."

Her experience or not, Maggi's songs are the stuff of reality and have a rare power to communicate powerfully to all with ears to listen.

I came across Maggi's writings in "Reflections" a daily resource which inspires clergy and christians, based one the daily lectionary biblical readings. She is a refreshing writer and thinker and would like to purchase one of her theological books? as she is a stimulating thinker and writer. her profile reflects a creative journey and is an inspiration. Thank you