Margaret Becker: The Immigrant's Daughter with a hunger for holiness

Jerry Wilson spoke to the raunchy rock 'n' roller with a heart on fire for God, MARGARET BECKER. 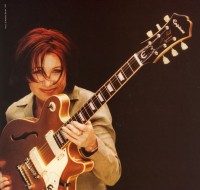 The roots of Margaret Becker's art, and of her belief, lie in her family history. She lifted the curtain a little on her background, beginning with the subject of the title track of her current album Immigrant's Daughter - her grandmother. "She was born in Ireland into a family with eight children. During that time there was a lot of financial difficulty over in that area, so she, like many others decided she would have a better chance of survival, and a better chance for a family and success, if she were to go to what everyone was then deeming the 'promised land' of America.

"She took the voyage to America by herself when she was 13. She came to Ellis Island, and got a job in Manhattan. The only jobs available for immigrants during that time were scrubbing someone's doorstep in Brooklyn or working in a sweatshop or anything else where labour was not patrolled. She worked very hard and long and lived in very crowded, bad conditions, but all the while believed that she was making something better for herself and the people who would be her offspring.

"She met my grandfather, who at the time was a well-to-do golf pro who managed a golf resort out on Long Island, and they got married. They had five children, and when she was in her early 30s, she developed an aneurysm in her brain and died suddenly. I never met her personally, but I know the story and I've seen pictures of her. I've also seen her marks on my mom in terms of her creativity and her literacy. When she came here, my grandmother studied very hard and became somewhat of an intellectual. I see that in my mom. I also see in her the same determination and the drive to overcome any circumstance. I think a lot of that has been translated to me, but not in the intensity that I wish it was."

Intensity, focus, drive, purpose. These words occur again and again when talking with Margaret. Although her parents are Catholics by heritage, and Margaret herself holds a respectful view of the Catholic Church, her own salvation came through the ministerings of a friend while she was in college.

However, the environment of her family life and heritage have proved to be useful allies in her walk of faith and in her work. Commenting on these roots, Margaret says, "From when I was young, I always saw myself in some kind of a creative field. I've been involved with music since I can remember. Since I was seven, I studied some form of instrument, and it was always ingrained in me from my parents that I should pursue some sort of a creative field, whether it be writing or music or what have you.

"But even more than that, the idea of commitment has always come through. It has always shown up in our family and in our relationships, one to another. The thing was that in our family, if you were committed to something, you needed to be very openly and very publicly committed to it, whether it was to a marriage, to a brother or sister, or whatever. Those two things have always stuck with me.

"When I found God, and when I found out who He was and what He wanted with me, there was no choice. I had to live in such a way that people would not be satisfied unless I was broadcasting to other people about Jesus in some manner, whether it was through digging a ditch in Guatemala, or whether it was through singing. I had to tell others about God's ability to love us, His desire to love us and the Man behind the Name that He chose to come to us with, by, in, and through. 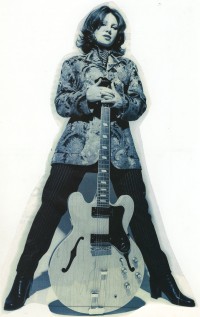 "I applied to a whole bunch of Christian missionary organizations, and never got accepted to any of them, so it became apparent to me that there was another way to go. I tried to deny it; I tried to work in a regular job for three and a half years, and it didn't work out. The Lord didn't give me a regular job; I always had piecemeal jobs and I could never get into a settled position that you could grow in or even have health benefits or anything like that. So I began to re-examine the music.

"And when I begin re-examining it, and He began blessing it as I went out and performed, it became apparent to me that: a) He was giving me some hard things to say that weren't always accepted easily but that I needed to be true to; and b) that this was the platform that He was going to use me in for the next couple of years. Based on that, Christian rock 'n' roll became the only way that I could express some of the harsher things, and some of them perhaps may be the more unpopular, eclectic principles that I think have been presented over the course of the past couple of albums. There wasn't really much of a choice involved. But nevertheless, I can say that I'm very happy, and I wouldn't want it any other way."

One thing that Margaret does wish was different, and has been grappling with over recent years, is the tendency to be overly harsh in her criticisms of herself. While all Christian artists do (or should) invoke a certain level of modesty in their opinion of their spiritual life, Margaret has time and again in such songs as "Who Am I" and "Find Me" from 'The Reckoning' and "This Is My Passion" from 'Immigrant's Daughter', repeatedly laid open her thoughts on herself and her mistakes in her pursuit of God for all to see.

As Margaret herself admits, "The biggest barrier in my relationship to the Lord and my commitment is me. It's my tendency to be a spurt type of Christian where I'm really hot for awhile and into everything that you would think you need to be into, and then I'll get burnt out and I'll pull back for a while. As a result of getting burnt out and pulling back, I will think that now He doesn't care for me as much, and that thought will cause me to pull even further back.

"In actuality, life is full of cycles, and cycles are not always unhealthy. In our walks, we will have cycles. I think my biggest barrier is my own reaction to what is at times completely normal behaviour for anybody. If I could just begin to incorporate more of the principles of God's love and His forgiveness as it relates to my own inability to be perfect, then I think my commitment would be a lot more solid and a lot easier to uphold."

Spiritual goals, of personal growth and security are the one's Becker finds important, not the Grammy or Dove Award nominations her last album received, or the critical acclaim. Margaret accepts the compliments with thanks, but continues in her walk unconcerned with the applause, for as she puts it, "The closer I get to God, the more I see how inadequate I am as a person, and how unworthy I am of His love. Those thoughts always keep Him on His throne in my life."

"I feel much more at ease about issues and my relationship with God at this point than I did when I wrote The Reckoning' she continues. The Reckoning' was a point of evaluation, and when you evaluate, you draw conclusions. This past year, with all my conclusion-drawing, there have been some adjustments that I've had to make in my personal faith based on those conclusions. I think I've come to a point now where I'm so confident of God's love because I've seen Him love me through all circumstances."